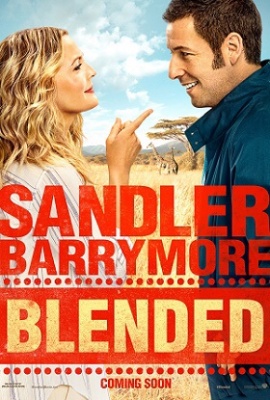 Blended did have a good message about family and life, but the movie wasn’t that funny, it had very few chuckle moments, but most of the time the forced comedy was just too much to bare. Rating 2.5 out of 5 Stars.

Adam Sandler has been a funny comedian when I was growing up. He was hilarious in what I believe the best cast ever for Saturday Night Live. He also made some iconic movies, in my opinion with Billy Madison, Happy Gilmore, and The Waterboy. To me, Adam Sandler was the comedic genius during the 90’s. It also seems like the movies where he acts with Drew Barrymore as a live interest, it turns out to be a well thought movie. Unfortunately for Sandler he has been in a comedic slump as of late with many subpar movies. To a point where it is just too much slapstick or very immoral. It may be true that his time is coming to an end, but he did come out with another movie with Drew Barrymore in hopes of putting another thoughtful movie. Unfortunately it didn’t pan out, but I did see what Sandler is trying to do with this movie. I will start with what I didn’t like, to the so-so, to what I like.

What I didn’t like, this movie for a Sandler movie was not funny. Yes Sandler is known for his slapstick, but his old movies were in good taste. Here the movie really tries too hard by doing an overdose amount of slapstick. It may be funny for a middle school or even high school kids, but for many adults or young adults it’s too much and not that funny. This movie pretty much failed as a comedy, and didn’t really do their goal of making people laugh. What bothered me too is that Sandler played a role of a father of three girls, but the way he deals with some of the girl issues were just plain out stupid. First off, if your girl looks like a guy, why name her Larry to make it worst. Who named their daughter Espn, and if she is dealing the death of her mother by talking to an invisible person. Instead of just ignoring it, there is counseling. Also if his youngest girl talks about Lucifer and talks in a demon voice, not only does she need prayer, that girl needs help as well. The father just plays it off as it is nothing. (Shaking my head.) Also, even though he is my all time favorite athlete, Shaquille O’Neal’s acting for a cameo was just plain awful, and needs to stay away from acting. (Still love you Shaq.)

The so-so, probably one of the cameos that was hilarious for me is seeing Terry Crews as the singer of an acapella group. When he first came in, I couldn’t stop laughing. This guy puts his all in this minor role, and I give him credit for that. However, that gag just kept going and going and going until it got real old. They even showed up back in the states on a hot air balloon singing. Really now? It just shows how hard they tried to make this movie funny, and ruined a good thing.

What I liked, first off Sandler and Berrymore always show good chemistry with each other, even for a subpar movie. I liked that the issues that Barrymore’s character has as a divorced mother of two boys dealt with issues that people can relate too like dealing with an ex husband, dealing with a kid with ADHD, and dealing with a pre pubescent boy starting to like women and dealing with puberty. Unlike the problems with Sandler character and his daughters which seem weird for the common people. However, I really got the message about family and love, and coping with a lost of a loved one and divorce. Unfortunately the slapstick comedy over came the message, but if you look deeply into it you will find it gratifying. I also liked how the director, Frank Coraci, painted a nice picture of the African scenery. The hotel was nice, and seeing the ambiance of the people in Africa really brings out a nice view of culture which I always enjoy. I loved seeing scenes where you see elephants, hippos, monkeys, and rhinos in the background. To me that is awesome, and makes me want to go to Africa one of these days.

Overall, the movie had potential to be a decent family movie, but unfortunately they concentrated on the wrong kind of comedy to portray this movie. Drew Barrymore did her best in this role, but as for Sandler, I hope he is still around for a while, cuz he is a funny guy. He needs to get over the hump and make a good movie, or he may be digging his own grave sooner than we think!!! Final Rating 2.5 out of 5 Stars.