How To Train Your Dragon 2 (Sidenote: About Last Night) 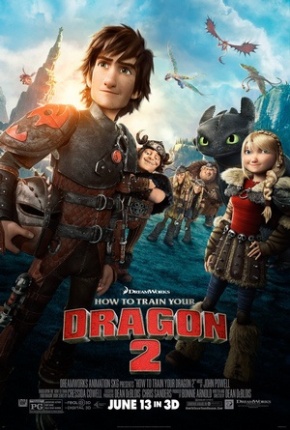 How To Train Your Dragon 2 is a beautifully animated, and it gives a lot of heart, emotion, and better character development than the 1st movie, may deal with some adult themes that may be too young for kids, but a good watch nonetheless. Rating 4 Stars out of 5.

The first How To Train Your Dragon movie was ok for me. In popular demand it was great movie, but for me it was too cliche and the character development was rushed. Don’t get me wrong, it had some good scenes and was animated well, but to me it was ok at best. I didn’t know what to expect with the sequel to this movie, but my hopes weren’t high. Luckily, it made me enjoy this movie more. I will start with what I liked, to the so-so, to what I didn’t like.

What I liked, the animation of this movie is awesome. The flying scenes and the battle scenes were beyond amazing. Just when you don’t think it can get any better, it does. The voice acting was great, just like the first movie. In this movie the voice of Djimon Hounsou as the villain, Drago Bludvist, was definitely scary and intimidating. It also show how crazy he is, and that makes a good villain for me. Cate Blanchett playing Hiccups long lost mother, Valka, showed why Hiccup is the way he is, and definitely show true compassion in what she believes, and how much she really missed her family. The story of this movie definitely took a turn for the dramatic and exploration. You see Hiccup, voiced by Jay Baruch, trying to find what else is out there, including other types of dragons. However, what I liked about most is the feeling and emotion they put in this movie. They developed the characters in a deep emotion where anybody with a heart they can relate to. The first movie you see Hiccups people and family as brute savages, however in this movie you see more love and compassion with the people and the dragons. Two powerful moments stand out for me is when Stoick meets his wife again, and instead of being angry, he showed love. With Stoick, voiced by Gerard Butler, he was always shown as a brute barbarian, but here he shows his heart and vulnerability when he meets his long lost wife once again. The other powerful scene is the death of Stoick during the first battle. I believe this death is up there with Bambi’s mom dying in Bambi, and almost up there with Mufasa’s death in The Lion King.

The so-so, one thing that made me wonder is if this movie at be too strong for kids. When I watched this movie there were some kids behind probably 7 or 8 years old. The kids were very silent during the death of Stoick and it got me thinking. Is this too intense for kids, especially under 10 years old? My consensus is yes, and it shouldn’t be promoted for kids under 10. However, that is just me ranting and this isn’t the first time kids movies show intense scenes like that.

What I didn’t like, there is just one scene, matter of fact one line. It’s the line coming from Gobbet, voiced by Craig Ferguson, where he said, “That’s why I don’t have a wife, and another reason too.” When he said that, I literally yelled out in the theatre, “Really now!!!” Not only was the joke a little crude, but it was definitely not appropriate for a kids movie. All I can do is shake my head. Also the part where Hiccup dehypnotize his dragon was a little too cliched for my liking as well.

Overall, this movie is better than the 1st one, and fans of the first movie will love this one as well. Just think twice before you bring your kids in, and one site that can help is kidsinmind.com. They break down all the various scenes where it may be inappropriate for kids. It’s unfortunate that for a kids movie I have to warn this, but it is what it is. Overall, it is a good movie. Final Rating: 4 out of 5 Stars.

(Sidenote- About Last Night: This movie had two things comedy and drama. Kevin Hart and Regina Hall provided a lot of comic relief as a broken up couple. Michael Ealy and Joy Bryant provided the drama of a couple who are dating. This movie is very down to earth when it comes to relationships, but it did have some slow moments. It is originally from an 80’s movie and a play before that which I didn’t see, but I believe this movie shows how relationships work nowadays which can be a lesson learner. Overall, I thought the movie was ok, and I believe it is more of a chick flick than a comedy. Final Rating: 3 Stars out of 5.)