Hercules (Sidenote: The Legend of Hercules) 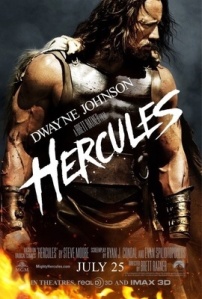 Hercules was a predictable battle hero film, but it was still a fun to watch popcorn movie for people who are into Greek mythology legends type of movies. 3.5 out of 5 Stars.

I am a big fan of Greek mythology in movies. I enjoy seeing epic battles with Greek monsters and legendary heroes and the Greek Gods. It is a joy to watch if it is done right. However, lately there have been some pretty bad movies that involved Greek mythology lately. Horrible movies like Clash of the Titans, the Percy Jackson movies, and even the other Hercules movie that came out earlier this year (more on that in my Sidenote). Hercules is a well known Greek mythology warrior with many story incantations, some good, some dreadful. I was hoping for a good Hercules movie, especially if you involve Dwayne Johnson aka The Rock. You have to make it epic, worthwhile, and fun. After the trailers, I was a little skeptical, because it reminded me a lot of the latest and dreadful Conan the Barbarian movie with Jason Momoa. It had all the signs of a CGI’ed mess with a lot of unnecessary screaming. Especially with Brett Ratner, the director of Hercules, who is the King of unnecessary things in a movie. Luckily, this movie came out decent. I will start with what I like, to the so so, to what I didn’t like.

What I like, let me start with the action. It wasn’t the CGI’d mess I thought it would be, it was actually a fun creative and almost epic action movie. I was not bored, and I sat back and enjoyed what I expected in a Hercules movie, pure action fun. Brett Ratner’s direction in the battles was pretty spot on with the down to Earth approach in the story of Hercules, and the using of CGI in good taste. The acting was pretty good in this movie. The Rock (I just like calling him that) really looked like a true Hercules. This guy was ripped, and I mean really ripped. He looked like a true warrior and very BA. Who else can punch a charging guy in the face with an arrowhead between his fingers, or flipping a galloping horse over him. The Rock was definitely a true Hercules, and he is also humbled as he is haunted by the death of his family and decided to make a crew to fight battles and be paid for it. He doesn’t like taking all the credit, and gives his crew his due, which doesn’t affect his legendary story. His crew does help him out, and each member has a special set of skills and vulnerability that really developed their character. You have Autolycus, played by Rufus Sewell, who is an expert blade thrower, but his real priority is getting paid and not much else. You have Tydeus, played by Aksel Hennie who is a true blood thirsty warrior and a faithful warrior partner for Hercules, but his thirst for bold and war makes him an animal and not much of a people’s person. Then you have Atalanta, played by Ingrid Bolso Berdal, who is a expert archer but as a women, she doesn’t get respected as a true warrior. You also have Amphiaraus, played by Ian McShane, who receives visions by the Greek gods about the future, but realizes he is old and his fate of death is inevitable, but he is ready for that to go down as a warrior. He provides some comic relief, and McShane for an old guy moves pretty well. Lastly you have Iolaus, played by Reece Ritchie, a nephew of Hercules who tells the story of the legend of Hercules, but wants to be a warrior as well, but Hercules won’t let him. Each person complements Hercules crew very well, and serve a good purpose. The real villain of the movie is Lord Cotys, played by John Hurt, who recruits Hercules and his crew to train his people of Thrace to become warriors claiming that he is stopping a vicious warlord, Rheceus, played by Tobias Santelmann, in killing innocent people, when really Lord Cotys is the true vicious warlord in trying to make an empire. He shows that his obsession is almost maniacal, that he will do anything it takes to achieve it, including killing his own grandson. One cool scene is when Hercules yells his name and breaks off the chains to smash the Executioner with it. That is typical but great Hercules canon for me. I also liked how they showed in the beginning how Hercules killed all the beast by himself,but in the credits, it shows his whole crew helped to kill these beasts from the beginning. Shows that Hercules is really a player in a team.

The so so, Brett Ratner has a knack of putting unnecessary things that have nothing to do with the plot of the story. In this movie there is one particular thing that kind of bothered me. In it you see a women taking off her robe and catching a millisecond of her rear. First off, who is that women and why should I care other than seeing her rear (which is nice by the way). Secondly, if you want to put unnecessary nudity in the movie, at least make it more than a millisecond. (All right, enough of me being a perv, maybe Brett Ratner really did for the pervs, enough to not make them to pervy, who knows.)

What I didn’t like, the story is the typical Hercules origin and what not and I didn’t mind that, but the movie was predictable for me. I knew that Lord Cortys was going to betray Hercules somehow, and my biggest clue was the statue of Hera in the city of Thrace. The statue of the Greek goddess that wants to kill Hercules was a foretelling of the storyline. I also knew that Hercules will use the statue to somehow kill off an army or the main villain, and it turned out to be both. I knew that Hercules and his army will lose many men in the first battle, but triumph in the second. To me that was almost obvious for anybody if you watch a lot of movies like me. Predictability loses points in my book.

Overall, even though the story was predictable, it was still a fun movie to watch with great battle scene action. The Rock has evolved tremendously as an actor, and now looking forward in watching future movies with him. As for this movie, I believe it does the story of Hercules justice, and it is a fun summer popcorn movie to enjoy!!! Final Rating 3.5 out of 5 Stars.

(Sidenote- The Legend of Hercules: For my Sidenote, it coincidentally is about the other Hercules movie this year with Kellan Lutz as Hercules. This movie was also an origin story of Hercules with a lot weaker storyline. It was cool showing him as an imprisoned gladiator, but the love story in between made it terrible. The acting was subpar, the special effects were beyond weak, and the battle action was disappointing. This movie was made for 10 year olds really, cuz there was no blood whatsoever, which made it look like a warrior training video. This is too watered down for my liking, and if there was no fighting action, it would’ve been a straight up bore. Rating 2.5 out of 5,