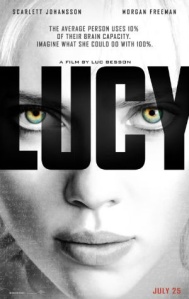 Lucy was an interesting movie from beginning to end, but the more the movie progressed, the weirder it gets, once the movie ends, all you can do is shake your head and say what the heck happened, this movie didn’t make much sense for my liking. Rating: 2.5 out of 5 Stars.

One of my favorite movies in 2011 was Limitless. A thrilling and smart movie that really made Bradley Cooper into a movie star. The story of the movie goes by the theory that we only use 10% of the brain, but there is a drug that helps us use 100% of your brain and makes the person really intelligent and remember everything you read your whole life. It gives you a nice down to Earth theory of a person’s true potential, and that’s why I loved this film. The reason I bring Limitless up is because the movie Lucy follows this same theory. It’s like a Limitless, but with steroids and acid on this drug. It is a science fiction movie that really puts the emphasis on fiction, and shows another view of what can happen to a person using 100% of their brain. I will start with the so so, to what I liked, to what I didn’t like.

The so so, the director, Luc Besson, is known for making action movies with a weird storyline filmed somewhere in Europe, this movie is definitely no exception, only there is a little of Taipei, Taiwan to start the movie. The story of this movie really got me engaged even though the movie got weirder and weirder as it continued. One of the main reasons why I was engaged to this movie is that I was curious to see what happens when Lucy, played by Scarlett Johansson, when she does reach 100%. Seeing her brain capacity percentage going up was like seeing your stock share going up, only that at the end your stock took a free fall down (more on the ending later). I mean when she was at 40% she was already skilled in fighting and shooting, but by a touch to someone, she can read their minds. That’s crazy, and that was only the middle of the movie, and I’m sure for most people it keeps them engaged to see if she turns to Superman or something of that nature. I give the movie the benefit of the doubt with that story, even though it often looked stupidly outrageous in the things she could do.

What I liked, the acting was pretty good. Scarlett Johansson gave a good performance as Lucy. You know she could kick butt, cuz we saw that in her roles with the Marvel Cinematic Universe movies. However, what really impressed me the most was her intelligent dialogue when she receives her powers. She could give Jesse Eisenberg a run for his money in tough dialogue execution. Morgan Freeman, who played Professor Samuel Norman, played a good role as a Doctor who researches about humans trying to reach their pure potential with their brains. I like how the movie starts off with him talking about this in front of a college lecture hall, cuz he sounded like he really knows what he is talking about and really believes in his hypothesis if people reach 40% of their brain capacity. Of course when Morgan Freeman talks, you listen. I loved seeing his reactions when he sees Lucy and her potential. The funniest part is when Professor Norman calls Lucy to tell her where she is, but she immediately comes through his door. The villain of the movie is a Chinese mafia boss named Jang, played by Choi Min-sik, he is responsible for giving Lucy her powers by putting the drug called CPH4 inside Lucy, but the drugs got loose inside of her. At the beginning of the movie he looked ruthless and not a guy to mess with, but did he really believe he had a chance going against Lucy with all that power. I guess when your the main bad guy getting screwed over, you don’t think clearly. Lastly, the confused French cop, Captain Del Rio, played by Amr Waked, he didn’t sound French at all, but he did his job when Lucy tipped him off with the other guys around Europe with the CPH4 inside of them. He looked confused during the whole movie, but realizes why Lucy needed to go to Professor Norman, to be studied.

What I didn’t like, first off the movie had a major loophole which is who is supplying this CPH4, and why the police are not trying to find them. Instead they concentrated on Lucy and Professor Norman using her for his research. I mean there is a possibility that other people are on this stuff, but the movie doesn’t explain well that they can die from this drug as Lucy almost did in that weird airplane scene. Which begs another question, where did Lucy get money to fly a plane, maybe she was smart enough to rob a bank, or she had money, but at least show us how. Lastly, what I didn’t like is the ending, so once she reaches 100% brain capacity, she turns to nothing and claims to be everywhere. That is how the movie ends, and I’m like what? So she is some kind of computer god, or a god in general, that movie leaves you hanging in a horrible way, and I hate when movies do that.

Overall, as I said before, this movie is like Limitless but on some serious steroids and acid. I was willing to forgive that her powers were getting stupid, but that ending really killed it for me in this movie. It’s a shame cuz the movie had potential, but I guess since it wasn’t original to begin with, it was doomed to fail!!! Final Rating: 2.5 out of 5.

(Sidenote- Walk of Shame: This comedy is starred by Elizabeth Banks wearing a sexy yellow dress. She is an aspiring news anchor who needs to make it to her tryout, but is having problems getting there after a one night stand with a guy she met at a club. It took a page from The Hangover book, and tried to make it its own. It had some funny moments with some funny cameos, but it comes up short with it’s hilarity. At least you get to see some youtube videos of news anchors’ blunders on live TV. Now that can be entertainment on its own. Rating: 3 out of 5 Stars)