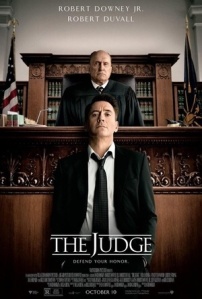 The Judge is a well acted interesting law court movie which harps upon family issues and values which may create loopholes and drag along with law jargon, but it is a good watch to see Robert Downey Jr. at his finest. Rating: 4 out of 5 Stars.

What I like about movies and shows that deal with law and court trials is not the drama (although you get plenty of that), but I learn a lot about law and your basic rights. I mean studying law is no easy thing and my hats off to all the lawyers out there (even though you all are expensive). I took one law class called Law and Liability and that was exhausting but very informative class. The law movies really gives me a great learning experience and entertainment, and I know the writers did their homework to making this movie believable. Some good law movies were A Civil Action, A Few Good Men, heck, even Liar Liar was a good and informative movie. This movie starring Robert Downey Jr. didn’t disappoint as well. I will start with what I liked, to the so so.

What I liked, Robert Downey Jr. as the lawyer Hank Palmer really stole the show. Downey Jr. Had the chops to play an eccentric lawyer that really knows what he is capable of doing. Hank was sarcastically funny, but very calm and collected when doing his job. Even under intense amount of pressure, he always kept his composure and be obnoxiously funny at the same time. Downey Jr. really made this movie with his character, and I enjoyed him very much. Not to disrespect Robert Duvall as Judge Joseph Palmer. Duvall acted with a lot of intensity and grace. He is a very well respected judge in his area and he is the father of Hank who didn’t really speak or respect one another until a funeral for Hank’s mom and Joseph’s wife put them together again. It seem like the whole family is a bit dysfunctional with one another because they have been through a lot. Hank’s other two brother’s and Joseph’s sons, Glen and Dale Palmer played by Vincent D’Onofrio and Jeremy Strong, all have a intense relationship with one another but you still can sense the love and respect for one another but there is some tension especially with Hank around now. Glen is the big brother that tries to be the voice of reason for everybody and Dale, who has mental issues, just wants to make everybody happy. The movie does bring in some family respect and values and shows even though a family is not perfect, there is still love and respect. The storyline is interesting because Hank showed the most hatred to his father, but when Joseph gets in trouble for a possible murder he might’ve committed. It was Hank who comes through big time for his father representing him as his lawyer. My favorite part is when his dad got another lawyer originally, C.P. Kennedy played by Dax Shepard (who apparently owns an antique store too), shows that he is too inexperienced and the way Hank proved that to his father shows how much Joseph has to swallow his pride and ask his abandoned son to represent him. The court dramas were pretty good, but the most intense was the final trial with Joseph as a witness and Hank have to unravel Joseph’s secret of his health for him to prove that he is innocent because his mind isn’t right. Much to the chagrin of Joseph and surprise of his brothers. Billy Bob Thronton playing the prosecuter, Dwight Dickham, was pretty good as another cool, calm, and collected lawyer. In the end, when Joseph was convicted of Voluntary Manslaughter, it was Hank who got him a Compassionate Release from prison, and Hank was the one helping him out with his health problems before he was convicted. Joseph may seem like a stubborn grouchy old man who does things for a reason and tough love, like sending Hank to Juvenile Detention for his behavior in high school to teach him a lesson, but he showed his true love when Hank’s daughter, Lauren played by Emma Trembley, came to visit and was a loving grandfather to her. The final moment after Joseph passed away and had his funeral, Hank went into the courtroom and played with his chair where his dad worked as a judge. There you finally see the respect Hank had for his father, and that was after Joseph told Hank he is the best lawyer before he passed away.

The so so, the movie didn’t go really in depth about the animosity between Hank and Joseph. They did mention and gave us a little understanding, but it came and went and focused more on the trial. The subplot, although funny, but not necessary was Hank meeting up with his high school sweetheart, Samantha played by Vera Farmiga. Samantha was trying to rekindle the love they had, but Hank, who is going through a divorce, wanted no part of it. The funny part is when Hank messed around with this young bartender at a bar who ends up being Samantha’s daughter, and then Hank almost believeing himself that she may be his daughter and actually made out with her (eww). Thankfully it was actually his brother Glen’s daughter so pretty much made out with his niece which isn’t that much better (eww). That subplot wasn’t necessary and made the movie longer than it already is. The movie did have some slow points with dialogue that had pure law jargon that can really bore people. Then again what do you expect in a law court trial movie, which for me was interesting enough.

Overall, if you are a fan of Robert Downey Jr., you will love his performance in this movie. He is funny and some of the actions he did in this movie was hilarious. If you like law movies, you will also like this movie. I found it interesting and made me learn more about how the law system works. Maybe I will need in the future, and hope Robert Downey Jr. can be my lawyer!!! Final Rating: 4 out of 5 Stars.

(Sidenote: Think Like a Man Too- I didn’t really like the first movie, Think Like a Man, and now they made a sequel with a horrible title. However, I like this movie slightly better. Not because it was funny cuz it was not. Honestly Kevin Hart is annoying as an actor. It’s about a story cuz it is a cliched version of a wedding and a batchelor put together to make this cliched special. (I mean, couldn’t they get another hotel than the Ceaser’s Palace.) The acting was decent, but wasn’t expecting All Star Hollywood performance with cheesy troubled relationship subplots. It wasn’t for the token white people acting, you know, white. I just liked it better for two reasons and that is their soundtrack and their fun cameos like Drake, Floyd Mayweather Jr., Ndamukong Suh, and somehow Kelsey Grammer was in it too. Other than that, it is just a typical film involving relationship problems that are cheesily solved at the end. Whatever. Rating: 2.5 out of 5 Stars)