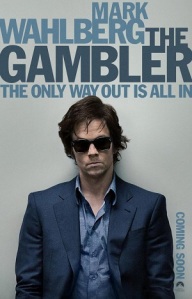 The Gambler brings some solid acting by Mark Wahlberg with an interesting story of the evil side of gambling and debt desperation, but the character in this movie really wasn’t likable to me, and begs the question, do you really care for what will happen to him or not. Rating: 3 out of 5 Stars.

Ahh, the great Mark Wahlberg aka Marky Mark. Of course I say this sarcastically calling him great, but I really do enjoy him as a person on and off the camera. Out of all the actors coming from my hometown city of Boston, Mark Wahlberg really captures the Boston spirit when it comes to the people here. That tough Boston guy personality where you can tell he is from the regular slums of Boston, and the way he interacts with his other brothers and friends who are entertainers as well. He used to be a one hit wonder rapper with the hit Good Vibrations, and his modeling for Calvin Klien underwear (Which I’m sure he still gets ridiculed till this day). As an entertainer he definitely has what it takes and has really come along as an actor year after year, and hasn’t lost his Boston touch. Some movies he made that I loved were The Fighter, Ted, Four Brothers, and The Departed (which he got an Oscar nod for), however, he made some bad ones as well like Max Payne and The Happening. Love him or hate him, he will always be strongly supported by his Boston fans, and it is a very strong fan base. So I enjoy calling him great, it is sarcastic, but fun at the same time. For the movie The Gambler, I will start with what I like, the so so, to what I didn’t like.

What I like, let me start by saying I’m not familiar with the original The Gambler movie starring James Caan, and I didn’t know this was a remake when I saw this movie. I thought the story was very intriguing and deals with the dark and evil story of a person dealing with the addiction of gambling. The character, Jim Bennett, played by the great Mark Wahlberg, definitely had a big gambling problem which leads to him to a big debt with an underground Korean gambling kingpin named Lee, played by Alvin Ing. He makes an ultimatum with Jim where he needs $260,000 in seven days, or he risks getting killed. It seems cliched but this what really creates the character of Jim Bennett. I have to say is this is some strong acting for Mark Wahlberg since his role as Staff Sergent Sean Dignam in The Departed. He was a person who pretty much had it all, a rich family, a English college professor job, wrote a top best selling book which pretty much made him famous, yet he still didn’t think it was enough and goes and gambles all his earnings away. At the beginning of the movie when he goes to the underground Korean casino, he plays like he knows what he is doing. In blackjack, he kept winning by playing smart, but his problem is that he doesn’t know when to stop. He always double what he won, and when he loses, he ends up with nothing. With his trip to the underground Korean casino he meets up with a guy named Neville Baraka, played by Michael K. Williams. He likes the way Jim plays so he decided to loan him $10,000to play which got Jim up to $80,000 which Neville tells him to stop and pay his cut that he owes, but Jim refuses and decides to go all in on a game of roulette betting on black which he loses. Needless to say, this angers Neville and asks to pay for his $60,000 soon. Which now leads Jim with a debt of over $300,000 which he does not have. However, he believes that Neville is a nobody and could be avoided, but that turns out that he was wrong. He decides to try and get a loan from another gambling kingpin named Frank, played by John Goodman. He was willing to give him the $250,000 only if he admits that he is a worthless man with no dignity, but Jim did have some pride and refuses. So now he had to come up with the money before getting killed. During the movie it shows how he is, it’s like he doesn’t care about himself and even with him selling a top selling book, he still believes he is a nobody. It shows during his class to college students how crazy he is. He goes on telling students if they are in it to become famous but don’t have true talent, that they should stop now and go to a regular profession. He even goes on telling the class that only three people have true talent which angers most the class leading them to drop the class. Those three people he mentioned were Dexter, played by Emory Cohen, a slacker who realized he is a great tennis player and will become professional. There is also, Lamar Allen, played by Anyhony Kelley, who is a great basketball player for his school and will be in the NBA, but has no interest in studying and just wants to make the big NBA money to help his family with medical bills. Lastly, there is Amy Phillips, played by Brie Larson, who has the potential to be a great writer. They each have a good relationship with Jim and knows about his gambling problem, and Jim always encourages them to be the best and don’t waste their true talent. What most I like about Jim is that when he wants something, he will try to get it with no BS whatsoever.

The so so, Jim has some interesting relationships. Most notably with his mother, Roberta played by Jessica Lange. Jim comes from a rich family, but really wanted to make a name for himself and not because of his family. His mother knows that, but she really wants to know what is going on in Jim’s life, and why he acts this way. When Jim finally opens up to her and mentions his gambling debt, she immediately wants to give Jim the money. Jim didn’t want her to do that, but she insisted. This lead to the scene at the bank where she requests that large sum of money, and you can see that Jim gets his personality by his mother. When he receives the money, his mother gave him an ultimatum that if he gets into gambling trouble again she will disown him. The reason I find this relationship so so is because what he uses the money for which I will explain in what I didn’t like, which really puts this relationship to shame, and almost not worth it. He also develops a romantic relationship with Amy. Amy knows first hand about his gambling addiction, because she works as a waitress in the underground Korean casino. Yet she still has a relationship with him. Maybe she finds more to him than what his external personality shows, but it is a double whammy that he is her college professor. I don’t know, but if I was her I wouldn’t do it. However, she kind of brings a sense of another purpose for Jim in his life, and I guess that’s a good thing.

What I didn’t like, the character Jim had to be the stupidest guy I’ve seen. He gets the money from his mom and should pay off his debt with Lee, but instead, he gambled all the $260,000 away. I mean how stupid can you be in doing that. Also when Neville comes and threatens him for his money which he obviously didn’t have, he made him go to Lamar Allen to point shave his next game and not win by more than seven. At first, Jim didn’t want to do it, but Neville threaten to kill Amy if he doesn’t. So he goes to Lamar, and tells him if he does he will earn $150,000 cash. Lamar without skipping a beat agrees risking his future NBA career in doing so. It brings up to this so called game, where all you see is Lamar dominating, then all of a sudden not doing well to get him benched, then coming back when the team is down and coming back to dominate again to actually win by seven points. My biggest gripe in that game is that if he has the ball in the final seconds leading by seven, why are they setting him up for a game winning shot. It’s just a shot and he could hold the ball till time runs out, and why didn’t the other team foul to try and get the ball back. That other team coach must be stupid or something. This solved one of Jim’s problems with Neville. So he finally decides to get the loan from Frank. Frank gives him the loan, but threatens him that if he plans to not pay back or commit suicide he will go after his whole family. So with that money he recieves he calls both kingpins to meet at a casino and only has enough money to pay only one person back. So he decides to gamble it on roulette on black. At this point should I really care for this character after all the stupid things he did and risking other people’s lives with his stupidness. I didn’t really care what the outcome for him was, cuz he did deserve to be killed. In the end, it did land on black and he managed to pay off his debt. Then that while whatever scene of him running to Amy’s place. When you don’t care for the main character, the movie really is worthless, and that’s how I felt.

Overall, I heard that the original The Gambler movie was really good which lead to some Oscar nods. I guess I have to go out and watch it someday. As for this movie, though a good performance by the great Mark Wahlberg, I didn’t care for his character. I like how the movie explores the reality of how evil gambling can be, but if you can’t root for the main character, then why even bother!!! Final Rating: 3 out of 5 Stars.