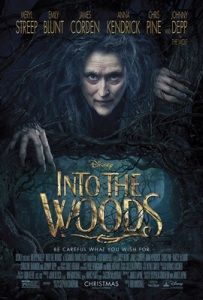 Into the Woods is a good story intertwining many of the classic fairy tales into one story, but the movie kind of dragged on from the middle to the end. Rating: 3 out of 5 Stars.

Musicals, I’m not a big fan. I believe movies and Broadway Musicals should be kept separated. There’s no need to make a movie about a musical, if you’re a fan, then head to Broadway and enjoy it there. With that said, I realized not too long ago that a lot Disney animated movies are musicals which kind of gives me a better appreciation for the craft of musicals. So some of my musical favorites are The Lion King, Hairspray, and Sweeney Todd (The first two for their music and story, the last one for its violent story). It’s not really my schtick, but I give it a chance anyways. As for Into the Woods, the story and their great cast did intrigue me, but never seen the original Broadway musical, I will start with what I like, to the so so, to what I didn’t like.

What I like, I really enjoyed the story of combining classic fairy tales into one cinematic story. The stories they used were Little Red Riding Hood, Cinderella, Jack and the Beanstalk, Repunzel, and they added a new story of a married couple, played by James Corden and Emily Blunt, who are Bakers who wish they could have a child. So the witch, played by Meryl Streep, comes through and tells them why they are cursed with no children and to break the spell they have to find a white cow, a red cape, blonde hair, and a gold slipper by the third day midnight, to create a potion to reverse the spell. As the couple goes out to find these things, they run into other characters in their own story and play a certain role. Out of all the acting, I really enjoyed Streep’s character as The Witch. You see a charismatic Streep in her role which is something you’re not use to seeing Streep do. I believe she played the role very well and very entertaining. It also still has her acting charm which we are used to and love. Director Rob Marshall really sets up some nice foresty scenes that really commemorated well with the tone and setting of the movie.

The so so, the music was good and it collaborated well with the acting and editing of the movie, but quite honestly, none of the songs were really catchy, let alone captivating. To me it was come ago, and not one song really stayed with me. The movie Jersey Boys had more captivating songs to be quite honest. Also it was great to see Johnny Depp playing the The Wolf. I thought his acting and character was great (even though his song about Little Red Riding Hood was a little on the creepy side). However, he was only there for five minutes of the movie. They set him up, he executes the climax of the story (which they didn’t complete the story), and he gets killed. That was it for the great Johnny Depp. It was great while it lasted.

What I didn’t like, for a great cast consisting of Emily Blunt, James Corden, Anna Kendrick as Cinderella, and Chris Pine as Cinderella’s Prince, it all seemed subpar for their potential in their acting wasted in them just singing. Also, this is the third movie this year where Chris Pine plays a douche, only this time a royal douche (Can Star Trek 3 come soon enough for his sake). Now I like that they added a little twist I’m the movie where they were about to say, “And they lived happily ever after,” but imediately interrupted by The Giant’s Wife, played by Frances de la Tour, from the Jack and the Beanstock story and starts creating earthquakes that terrorized the whole village. It started to become dark where each character loses something significant. Most notably The Baker’s Wife, who died falling off a cliff avoiding The Giant’s Wife. With this twist I was interested to see where would this go, and when the twist happens, it needs to bring it. Unfortunately, it didn’t bring it. The way they defeated The Giant’s Wife was too silly, and then the way the story wraps up all the problems was just too rushed and idiotic. The darkest points like The Baker losing his wife should be a tear jerker, but instead, I got nothing. I believe the movie would’ve been a lot better if it ended on “Happily Ever After.” Instead it just ended dreadfully and too exhausting.

Overall, I may take some flack for this by people who actually love musicals. Its just not my thing. I have Into the Woods a shot, but to me it didn’t really deliver, and it’s a shame because it started off pretty good. It is what it is, but maybe one day there will be a musical I would really like. One day!!! Final Rating: 4 out of 5 Stars.