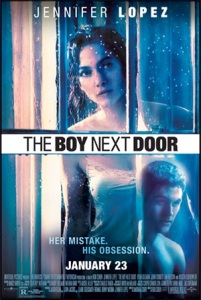 The Boy Next Door is a horrible, cliched, and predictable movie. It really tries hard to be a suspenseful and thrilling movie, but it really was just a dumb movie.

Jennifer Lopez has been my childhood crush since middle school, and she is one of the pioneers for the Latino Revolution in entertainment. Not only for her acting but her music really paved the way for Latino artists to aspire and show the world that the Latinos are coming, and ready to entertain. J. Lo brought in her own flavor in her craft in movies and music, and it was entertaining. She is the first artist to score the number 1 selling movie and album in the same week. That is impressive. One role I will always remember is her portrayal of Mexican-American singer Selena in the movie Selena. She really captured the essence of what Selena is all about in her music, and that tile really prompted her career. Nowadays she has taken a slip, but her being an American Idol judge helps, and she keeps on trying to make a name for herself in whatever she does. Unfortunately, some of things she does hasn’t been quite successful, and The Boy Next Door is one of them.

What I Like: Jennifer Lopez’s beauty. She is my childhood crush, and still is.

The So So: Nothing

What I Didn’t Like: Where can I start. The story was interesting, but as the movie started to unfold it just fell into a bunch of cliches and predictability. The biggest one is probably a guy who is likable at the beginning, but ends up to be a complete psycho. He does psychotic cliches like putting pictures of Claire Peterson, played by Jennifer Lopez, in his basement. Messing with something that could create a very dangerous situation. In this case the psycho named Noah Sandborn, played by Ryan Guzman, messed with the car brakes to almost kill Claire’s husband and son, played by John Corbett and Ian Nelson, and even his parents. Which for some reason the brakes go out when they are going downhill on a curvy mountain. When the psycho does kill somebody and places it somewhere where the protagonist conveniently finds it cliche. Also the cliche where the final showdown has the whole family involved and during the battle they are surrounded by flames and tools which helps the protagonist defeat the psycho and freeing her family. It was a cliche wonderland in this movie. The acting was horrible as well. Ryan Guzman at first played a very pleasant person, but when he starts getting bipolar, it was like he was trying to hard. Even as a psycho I wasn’t really buying it. Kristen Chenoweth played, Vicky Lansing, who is Claire’s best friend and the Vice Principal of the school Claire works at. She was very annoying  in telling Claire to divorce her husband and to date other jerks. She was definitely not the voice of reason for Claire, she was the complete opposite. I’m glad she got killed by the psycho Noah. The story deals with very vicious plots. The main one is statutory rape which pretty much Claire commits when she slept with Noah, who is 17 years old, before he turned all psychotic. Noah tries to expose her for her love which Claire narrowly escaped, but in the end, there was no repurcussions for actions. I’m willing to bet if it was a guy, people would go hard on him, but since it was a woman who was going through a separation, she’s ok. Double Standard if you ask me. There was a scene where Vicky was reprimanding Noah for his actions, and Noah verbally abuses her, and her response was to slap him, which he stops her from doing. That is not professional for a Vice Principal to do in that situation, let alone illegal to hit a student. So many dumb moments in this movie, and the most idiotic moment was when Claire finds out through Noah’s computer that it was Noah who messed with her separated husband’s car brakes. Which lead her to investigate and find out that Noah also killed his parents, but instead of letting the police know, she does nothing and faces her problems herself.  I mean, I know she doesn’t want her one night stand to get out to the cops, but in this situation, you have to take your beatings for the sake of your family and safety.

Overall, this movie was flat out dumb. Nothing else to say more unless you want to teach people what not to do when dealing with a bipolar psycho!!!

(Sidenote: Still Alice- This movie stars Julianne Moore as Alice Howland. She is a linguistics professor at Columbia University and is diagnosed with early-onset Alzhiemer’s disease. This movie shows the effect of the disease, and how it affects the person and their family. It’s a good movie to learn about the effects of the disease, but it was really slow as the movie progresses. It did have some interesting scenes nonetheless. I believe Julianne Moore will win the Oscar for Best Actress with this role, because she does capture not only the effects of the disease but the emotion that comes with it for a person diagnosed with this disease. Rating: 3 Stars)

(Sidenote: Wild- This movie stars Reese Witherspoon as Cheryl Strayed. A lady who decides to go on an adventure and hike and camp all 1,200 miles of the Pacific Crest Trail. The movie shows her trails and tribulations during her adventure, and also shows her really troubled past of divorce, sex, drugs, and dealing with losing a loved one. The movie shows why she needed to complete the trail and start a new life once she does. It was an interesting movie to watch with some slow points, but was really disappointed with the ending of the movie. I wanted to see more emotion from her when she completes her hike.                       Rating: 3 Stars)

(Sidenote: Mr. Turner- This movie is about the last quarter of life for famous British painter J. M. W. Turner, played by Timothy Spall. I found this movie greatly boring, and really couldn’t find any relation to Mr. Turner. It came to a point for me into why I should care about this guy. A snore fest if you ask me.                Rating: 2 Stars)