Kingsman: The Secret Service (Sidenote: This Is Where I Leave You, and Alexander and the Terrible, Horrible, No Good, Very Bad Day) 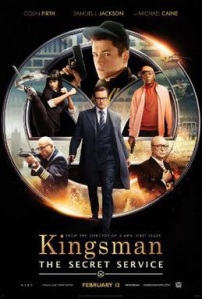 Kingsman: The Secret Service is definitely a creatively put together film, but when is too much, too much, decent movie nonetheless.

Matthew Vaughn has really came to the directing scene with a bang. It really started for me with the movie Kick-Ass, and how creative the action scenes were, how funny and awkward the story was, and how gory the violence can get. What I liked about Kick-Ass is how grounded the story really is, but what bothered me is that the action scenes, especially in the end got a little too much that it looks cartoonish. With that said, when Vaughn did X-Men: First Class I was completely blown away with how great that movie is. It had the right blend of action and story, and really kept the mythos of the X-men with his own twist. Before I saw the movie I was skeptical, afterwards I was looking forward to where the X-men franchise will go. Vaughn saved the X-men franchise with his film. Now with the film Kingsman: The Secret Service, I knew this movie will be creatively fun, but I wasn’t sure whether it will be over the top or not. It looks like Vaughn has a knack to make scenes where you’re like what the heck did I just saw.

What I Like: Director Matthew Vaughn definitely knows how to develop his characters. Right from the beginning, you have the full scale of what the character is all about, and what he will do. Two examples, with Colin Firth playing
Harry Hart, a Kingsman veteran. You knew he was the guy that is very respected in the Kingsman organization where he plays a secret agent. You knew that he would be a good mentor and even a father figure, and yet can kick butt when he has to. I like how he is perceived as a gentleman, and that’s what he wants the rest of the world to see him. He is a class act, that makes you think twice to double cross him. I mean this is a side of Colin Firth you never seen before. He usually plays a serious drama role, but as an action star, he was pretty good. The other character, Eggsy Unwin played by Taron Egerton, is the typical nobody who became a somebody by becoming a Kingsman. Even though his father was a Kingsman whom Harry respects, but he sees a lot of potential in Eggsy, and believes he has what it takes. In the movie, I really enjoyed the training to become a Kingsman. The training is lead by Merlin, played by Mark Strong, who is very tough nosed and really can get to your head. They really messed with the candidates’ minds even though they were all just bluffs for the agency to see if they are mentally prepared and when stress is at a high level, do they work as a team. Some tests that were cool is filling the room up with water, and having them figure out what to do, or jumping out of a plane where one person doesn’t have a parachute and working as a team to land on the target safely. I also liked how the movie pays homage to British movies especially the James Bond’s movies. It is a nice touch about how the story is like 007, and they knew it and made fun of it. I also liked how they compared the different movies from the James Bond franchise. Probably the best scene from the movie is where Harry fights with all the racist church people was awesome. That scene was filmed and choreographed so perfectly. I like that it had the right taste of violence, and the way Harry maneuvered his way through the angry crowd to survive was just epic. Probably one of the greatest fight scenes I’ve seen in a while.

The So So: The villains were different. Samuel L. Jackson played the role of billionaire playboy Richmond Valentine. He is a respected philanthropist that runs a successful phone business. (Even though he dresses like a teenage street guy.) Him as a villain was very interesting. Like other villains, he didn’t want money, power (though he kind of had that), or revenge. Since he is an environmental philanthropist, he just wanted to get rid of the humans who are not on his side, which is most of them and kill them off. (Almost like a calm Adolfo Hitler.) His plan was to to give away free cellphones and Interent for everybody and using the phones he gave away to emit a sound wave that releases an aggression hormone where people beat the living crap out of each other. For Samuel L. Jackson, I expect him to start yelling like a maniac in this role, but he was more cool, calm, and collected in this role. (For me to have Samuel L. Jackson in a movie and not have him yell or rant angrily about something is a wasted role.) In this movie he was a treehugger who was mentally insane, but doesn’t show it. Confusing if you ask me, but he played the role well. (I mean what villain would kill, but have remorse about it.) Give them credit for originality. As for his sidekick/assassin villain named Gazelle, played by Sofia Boutella, she is a women who has prosthetic legs which carries kitana bladed that can cut you cleanly. She pretty much does the dirty work for Valentine. Once again, unique, but her skill really gets corny after a while. The twists were kind of predictable, especially when the leader of the Kingsman, Arthur, ends up being involved with Valentine’s plan. (I just had that feeling he was.) However, I enjoyed how Eggsy outsmarted him when he found out with his street smarts. Pretty good to make a predictable scene good to watch.

What I Didn’t Like: In some parts in the movie the action scenes were awesome, however, there were a lot of scenes where it definitely seem too much and forced. (One of the main reasons I didn’t really like Kick-Ass 2.) Some scenes were laughable, while others just made me till my eyes. Especially that final scenes with Eggsy and Gazelle, it looked like it was pulled off a Japanese anime cartoon. In fact, some of the scenes, especially the last scene, were just too cartoonish. Also, can really one guy who just became a Kingsman can really out maneuver all the people shooting at him. I highly doubt that. Also the Bristish street accents really took me some time to understand. (Why I’m not a fan of movies made in England.)

Overall, if you’re a fan of some fun and creative action, you will enjoy this movie for just that reason. Other than that, it is kind of a mediocre movie which really doesn’t make this a real good movie. However, if you’re in it for some popcorn fun, this can be a decent watch!!! 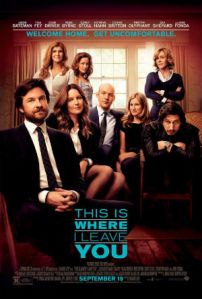 (Sidenote: This Is Where I Leave You- This comedy movie stars Jason Bateman, Tina Fey, and Adam Driver. This strong cast is about a family of four siblings whose father just passed away and they all have to be together for seven days to honor their dad’s last wish to have a Jewish custom called shiva. During that time, the family rekindles their problems and show why they were dysfunctional. The characters show that they have a lot of chemistry with one another, however, I wish the story had more depth with their problems and bring it closure. This movie could’ve been better than what it is. Maybe a sequel will make it better, who knows.
3 Stars) 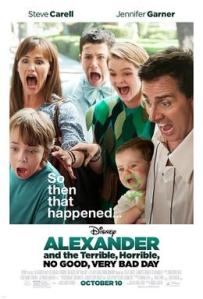 (Sidenote: Alexander and the Terrible, Horrible, No Good, Very Bad Day- I remember the book when I was a kid, but for this film, they should end with a “Very Bad Movie.” I mean even for a kids movie, this was stupid. Steve Carell and Jennifer Garner couldn’t save this dumb movie. They try to make it family friendly with a boy making a birthday wish come true to give his family a bad day and what not, but all I felt was annoyance. I guess I will stick to the book for now.
2 Stars)