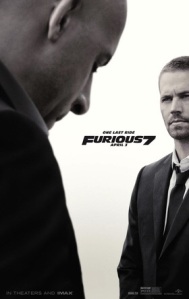 Furious 7 is what you get as a fan of the franchise, some great surreal action, decent acting from the characters you love, and seeing some awesome cars, yes the movie has its flaws, but for the fans, they get exceeded expectations for this movie, and Director James Wan shows he doesn’t just do horror movies and can make action movies as well.

I remember when The Fast and the Furious came out, and how excited I was to see a movie about cars and racing in the streets. It gave me memories of my times as a kid living in LA watching these types of races and seeing lowriders on display. The movie has exceeded my expectations on how grounded this movie was, and getting to know the actors Vin Diesel, Paul Walker, and the beautiful Michelle Rodriguez. Unfortunately, as most movies do, the sequels didn’t even compare to the first. I believe it is because the lack of the main characters we grown to love in this movie weren’t there that really affected the movie. I thought it was a dying franchise. When Fast and Furious came out, I thought they went back to their old ways in bringing back the characters, but I thought it would end right there. However, the movie turned to a revival with Fast 5 by bringing back all the characters from the past movies and put an angle of making it a heist movie. The movies has changed for the better and has been entertaining. I’ve enjoyed this franchise very much, and I hope with Furious 7 they can end it on a positive note. This movie has definitely exceeded my expectations.

What I Like: If you’re a fan of the franchise you will love this movie. This movie will exceed your expectations. The action was great. Director James Wan, who is known for directing horror movies, proved to everyone that he can make a great action movie. It knocked my skepticism out of the park with this movie. What I can appreciate is that he tried to make the action as down to earth as possible. Usually this franchise has surreal or unrealistic action, which was cool to watch, but dumb as well. For this movie, they made the real action and barely did any CGI, and I really enjoyed that. The movie was pretty much pure action. My favorite action scene was when the team skydived off the plane with their cars and landed on the mountain range to break out a hacker named Ramsey, played by the beautiful Nathalie Emmanuel. That scene was unique and very Fast and Furiousish. I enjoyed every minute of that scene. The villain of the movie, Deckard Shaw played by Jason Statham, had to be one of the best villains in this franchise. From the beginning the movie it showed he was BA. He showed that he was one dude you didn’t want to mess with, and he had grenades for days to get out of situations. Jason Statham will give you a BA guy, and that’s what he did avenging for the death of his brother in the last movie. Another character they introduced was Frank Petty, played by Kurt Russell, he is like the new leader for the Fast and Furious crew, and provided some comic relief in the movie. One thing I give James Wan credit for is that he made his actors actually act, and I appreciated that. Lastly, I really enjoyed the ending where they dedicated the movie to Paul Walker. I like how they made the movie retire Paul Walkers character since he is becoming a family man. I almost cried seeing their dedication to him, and it was a proper way to send him out.

The So So: The movie had its share of cliches and unoriginality. The movie is a typical revenge plot, and some scenes are just too typical, Like in the final scene where both Dom Toretto, played by Vin Diesal and Deckard Shaw had the final fight, but they went with the cliche where instead of shooting him in the face, they decide to street fight with wrenches and chains. The thing that I hate they do in movies is that every fight scene they had shaky camera scenes where I can’t really enjoy the scene. However seeing Dawayne, The Rock, Johnson, as Luke Hobbs who was barely in the movie, but had the epic scene where he shooting people with a big turrent machine gun, it was a cool scene. Even though it created a corny scene where Hobbs breaks out of his cast and helps the team was corny, but cool at the same time. It is what it is for the sake of the story.

What I Didn’t Like: Other than the cliches and the predictability there were things I didn’t like. Like how the hell, Hobbs survived that fall into a car and be in the hospital shirtless only surviving a broken leg and arm, and not even breaking his back. That is BS if you ask me. Also some scenes were so surreal that it was almost BS, like when they transferred Ramsey from one car to another in lest than 30 seconds, that is a lot of BS as well.

Overall: Like I said, if you’re a fan of the franchise, you will love this movie, is probably the greatest movie Fast and Furious movie you will ever scene. Probably the best The Fast in the Furious in the franchise, I still think the original is priceless, but this just add another great movie to a cool franchise!!!