Paul Blart: Mall Cop 2 (Sidenotes: Hector and the Search for Happiness and The Congress)

Paul Blart: Mall Cop 2 had a horrendous beginning, but as the movie progressed, it gave me a few chuckles, forgetful nonetheless.

Some people say I look like Kevin James. (Haha, funny, whatever.) With that said, I really do enjoy some of his work. I really enjoyed him as Doug Heffernan in the TV Show King of Queens. I also enjoyed some of his movies like I Now Pronounce You Chuck and Larry, and Here Comes the Boom. He has made some terrible ones as well, but he always stays true to his character in his comedy, even in his stand-up. As for Paul Blart: Mall Cop, I thought the movie was funny enough to merit and ok from me, but when the sequel was announced, I knew it might be trouble. Unfortunately I was right, but not as bad as I thought it could be.

What I Liked: The beautiful Daniella Alonso playing Wynn Hotel Manager Divina Martinez was fun to look at in a forgettable movie. I won’t forget her in future movies.

The So So: The movie did pick up once the cliched story started developing. The chuckles that came from me in its comedy really is the recycled jokes that made people like the first Paul Blart: Mall Cop movie. Such as Blart dealing with his hypoglycemia, him sliding way too short or too long trying to hide, having special weapons, like a taser gun, that helps him in the end, and accidents on a segway. At least Blart has his charm to see him as a likable character, especially when he made his Keynote Speech at the Mall Security Convention. Probably my favorite part in the movie is the fight between the bad hotel security people and the mall cops. The fight scenes was choreographed well to make it amusing, however one gripe I have is that these bad guys had guns shooting at Blart all the time, and when the fight happened, nobody had guns all of a sudden? Anyways, the funniest part of the movie is when Blart gets kicked by a horse which was already spoiled in the movie’s trailers.

What I Didn’t Like: The first half of the movie was just horrendous. The jokes were hit and misses, and I was in a theater with a lot of kids and they were not laughing either. The way the movie developed Blart’s character again as an outcast was just stupid, juvenile, and lazy writing if you ask me. The villain’s were forgettable. Neal McDonaugh who normally plays decent villains was just not good enough for me as Vincent in the movie. He claims he’s crazy in the movie, but if he came after me, I could probably take him. The rest of the crew were dumb as well. They were suppose to be professional thieves, but were handled easily. Steve Wynn finally allowed a movie in his casino, but he allowed this movie? Even making a cameo in it? This guy must be blind or something? (Oh wait, he is, my bad.) He needs to fire his public relations  guy, or marketing team.

Overall, even though the movie picked up at the end, the movie is forgettable. I know some fans of the first movie will probably enjoy it and give the movie good box office results, but I hope they don’t make Paul Blart: Mall Cop 3 as campus security in UCLA. I really hope not!!!

(Sidenote: Hector and the Search for Happiness- This movie stars Simon Pegg as psychologist named Hector. After he finds that his job is really not making people happy, he goes on a adventure to search for the true meaning of happiness. He goes to China, Africa, and Los Angeles to do so. The movie’s premise was very interesting and got me engaged to see what happens to Hector and his research. However, I thought the movie lacked depth, especially when he was kidnapped by African drug lords, the movie didn’t give it too much feeling. When the story unravels and concludes, I didn’t felt satisfied with what the message of the movie is. It does bring some good laughs, and very cultured as well. Rosamund Pike plays Hector’s girlfriend, Clara, who is crazy in this movie too, though not psychotically crazy like in Gone Girl.
Rating: 3 Stars) 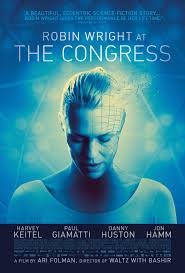 (Sidnote: The Congress- Put this down as the weirdest movie of 2014. This movie stars Robin Wright playing herself as an actress at the end of her career, and is offered a contract to have the movie company scan her to use her form in any movie they please without her physically being there. When she agrees, the movie takes a spin for the what the heck I am watching. The movie goes into animation all of a sudden, because a city decides to make themselves animated by drugs to live longer lives and become happier. Then things go terribly wrong when rebels attack, and Robin becomes lost in the world, and she is finding her way back, and also finding her son who has Usher Syndrome. The movie has a great cast that includes Paul Giamatti and Paul Hamm, but I just don’t get the message that director Ari Folman is making this movie. At least the animation entertains you in this weird movie.
Rating: 2.5 Stars)