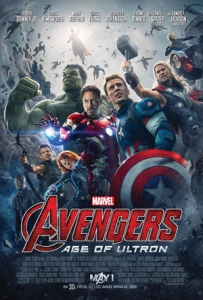 Avengers: Age of Ultron is a great comic book film which excels in all aspects, great action, great superheroes, a great villain, and great funny one liners, it may not have the awe factor as the first movie, but it is a good film that continues the Marvel Cinematic Universe.

Man, all of these movies within the Marvel Cinematic Universe (MCU) has really been awesome for me. As a big fan of Marvel Comics and movies, this has been the ultimate treat for me in watching these films. It really takes the nerd out in me, and I’m proud to admit it. It really all started when the very first Spider-Man movie came out, and how I wanted to see more. More characters and villains and what not. Then came many others, some good like X2: X-men United, Blade, and Spider-Man 2, and some bad ones like Spider-Man 3, Fantastic 4, and the first Hulk movie. No matter how good or bad these films are, I enjoy them. When Iron Man came out and started the “The Avengers Initiative,” I was hyped, but didn’t know how they would accomplish it. The movies before The Avengers movie were pretty good, but wasn’t sure they can pull it off. Low and behold, not only they pulled it off, but it became arguably the best comic book movie ever. Then and there I knew that the people at MCU know what they are doing, and even when I give a little doubt, (like Guardians of the Galaxy) they shut me up. I have been enjoying the ride by the movies they produce, and still look forward as they movie on with Phase 3 in theor universe. Not before talking about the sequel to The Avengers.

What I Like: Where can I start. I like how this movie really started with a huge bang. Right at the beginning there was intense action as they were invading Baron Wolfgang von Strucker’s, played by Thomas Kretschmann, Hydra lab to find Loki’s Scepter. That seen a lone showed that even though they don’t always come together, when they do, they work as a great team. They use each other’s strengths to complete their mission, and show why they are a force to be reckon with. What I also like is when they are not fighting, how they are interact with one another as regular humans. Especially at the party scene at Avengers Tower, they show how grounded they are and why they enjoy each other’s company. To make Thor, played by Chris Hemsworth, grounded was actually fun to watch, and bring another angle to his character. The main story was the Avengers dealing with another supervillain named Ultron, played by James Spader. I like how it starts with Tony Stark, played by Robert Downey Jr., wanted to create an artificial intelligence (AI) to protect the world from aliens after their first battle in the first movie, but it ended up backfiring on him and the rest of the world. Spader as Ultron was very creepy, but I really enjoyed how villainously sarcastic he was, and how he was like a robot Hitler in destroying all of humanity. I like how he made his debut as a technological matrix and battling another matrix in J.A.R.V.I.S. which made him rise to power to control all machines. He was perfect in this movie, and was portrayed very well on film. Before I move on, my last article I criticized the movie Ex Machina for being too redundant in a movie about AI. However, the story of Ultron goes back since the 60’s when it was created in the comics. That’s why it gets a pass for the cliched AI plot. The sub villains were Quicksilver and Scarlet Witch, played by Aaron Taylor-Johnson and Elizabeth Olsen (the better looking Olsen), two twins that went through Hydra’s experimentation and survived with super powers of lightning speed and telekinesis and mind control. Even though their European accents were subpar, I liked how their characters were developed into them hating America and Tony Stark and joined Ultron to get back at them, before figuring out Ultron’s ultimate plan. I liked how Scarlet Witch hypnotized most of the Avengers and showing their dark and troublesome pasts which really dives into the character development in this film. It made the heroes even more grounded and human which is a major plus in my book. Other character aspects i liked is that they give Hawkeye, played by Jeremy Renner, a better role in this movie. I like the minor twist of him being a family man, and how even though his the most human out of all the Avengers, he does feel that he is still needed. Especially, how he motivated Scarlet Witch to become an Avenger. I like the romantic aspect between Black Widow, played by Scarlett Johansson, and Hulk, played by Mark Ruffalo which really develops into Hulk’s story of him always doubting himself of self controlling his inner monster which ultimately leads him to venture alone once again.Lastly, I enjoyed the debut of Vision played by Paul Bettany. I like how he was intended to be Ultron’s ultimate body, but instead J.A.R.V.I.S. was downloaded to the body in creating Vision as a good humanoid robot that ultimately defeated Ultron internally and physically. It didn’t show much, but you can tell he will be a great force for The Avengers. I also enjoyed the little subplots which we can expect for future movies. Like Iron Man and Captain America, played by Chris Evans, having major disagreements that can lead to the future Captain America: The Civil War (which I believe will be epic). Introducing Ulyssus Klaue, played by Andy Serkis, and being a black market arms dealer of the rare element vibranium and sets up the Black Panther storyline. Stan Lee’s cameo was hilarious playing and old veteran getting drunk off of Thor’s Asgardian liquor. Also, all the other cameos in the past MCU movies contributing in a way to set up an Avengers headquarters being lead by Nick Fury, played by Samuel L. Jackson, and having Captain America train the new Avengers in Vision, Falcon, and Scarlet Witch. Last thing i like about in this movie is that the great action, and the hilarious one liners and moments (surprisingly mostly from Thor), and everything else really made this a good comic book movie. The one liners made it very comical which should satisfy the deepest Marvel geek. That is what The Avengers is all about, to make a great comic book movie that sticks with the essence of each character and villain involved. That’s what makes it great.

The So So: One of my biggest fear for this movie was if their marketing is showing too much of the movie. It happened so badly with The Amazing Spider-Man 2 last year, and hoped it didn’t this year. Fortunately, it wasn’t that bad, they kept the good parts out for the most part. Unfortunately, probably the greatest scene in the movie, Hulk vs Iron Man’s Hulkbuster, was shown too much in their marketing. What really killed me was watching the clip during the MTV Movie Awards, and spoiled me on why these two are fighting. (Curse you MTV) With that said, I still give the scene credit for being awesome, and probably the greatest fight in the whole MCU by far. Sometimes trailers can show too much, and makes me second guess myself in watching these trailers. The biggest thing in this movie as well is that fans expected somebody big to die. It’s funny, because people really thought it was going to be Hawkeye, and watching this movie really made sense for him to go. In the end it was Quicksilver that received MCU’s first superhero death. Quicksilver was cool in this movie and was character developed well, however, I felt his death was too soon for us to feel a deep emotion for his death. I hate to say it, but his death wasn’t impactful enough for this movie. With that said, he did go out like a warrior in dieing while saving Hawkeye and a kid, and for an Avenger soldier, that is a good way to die. When comparing to Quicksilver to last year’s movie X-men: Days of Future Past, I enjoyed that Quicksilver more in the X-men movie and mainly for one of the greatest scenes of 2014 to show how fast he really is. Lastly, ai was disappointed that there was no end credit scene which is almost certain in MCU movies. They did have a mid credits scene where you see Thanos, played by Josh Brolin, grabbing the stoneless Infinity Guantlet saying, “I will do it myself.” The scene was ok to me. I liked it because now we know that Thanos is coming to set up the next Avengers sequel called Infinity Wars, but these mid credit and post credit scene is suppose to give some type of element of surprise which it didn’t thanks to their big Marvel announcement of their Phase 3 movies. It is what it is, but we know that Thanos is coming and we can get excited for that.

What I Didn’t Like: I was disappointed how Marvel made Baron Strucker die so quick. It’s like we barely knew him and now he’s gone. Comically he was a big leader for Hydra and a menacing villain, but the movie really didn’t do any justice to him and that’s a shame. Maybe Marvel is moving on from Hydra as enemies, and that was too quick. Especially with all the destruction they caused in Captain America: The Winter Soldier and the TV show Agents of S.H.I.E.L.D., and now it’s looking like it’s all set. Maybe, but the casting of Daniel Bruhlas Baron Zemo may change my mind. Now for the great question, is it better than the first Avengers movie. Honestly I have to say no. Reason because when The Avengers was made, it gave me an awe factor that surprised me how great the movie is and that they finally made a great movie that involves many talented actors and superheroes with many different elements come together to fight. Now with this movie that is expected, and the awe factor pretty much went out the window. It’s still a great comic book movie, but it will be very hard to top The Avengers, but if they do with The Infinity Wars, MCU will be the greatest film franchise ever.

Overall, this movie gives a great continuation to the MCU series and setting up for something big in 2018-19. If you’re a fan of the comics, you will not be disappointed and will just sit back and relax, and enjoy what Marvel has to offer. Now we start Phase 3 with Ant-Man coming later this summer. If there is any indication this movie will be another good one and original in it’s own right. I can’t wait!!!