Minions started off with potential, but it then dragged on until the end, and lacked the emotion of the other two films.

I always thought the Despicable Me franchise was good enough to be entertaining for everyone. It was a cool idea, that had a lot of emotion involving family. It was really a family friendly movie for people to watch. In my opinion, what really made the movies were the minions that worked for Gru in the movies. They were hilarious with their antics, slap stick, and the way they talked with their mixtures of different languages. To me, they made the movies enjoyable. Every time they have a scene, they steal the show. So when I heard they are making a spin off from Despicable Me about the minions origins, I thought it was genius. This movie will develop their character well, and show how funny they really are. So I thought this movie will be good, unfortunately, I was wrong.

What I Like: As I said before, the premise of this movie is intriguing for me to really want to watch this movie. When you watch the first two Despicable Me movies and laugh at the minions craziness, you do wonder what the heck are they? Where did they come from? This movie actually does explain about these minions, and how they started. Also, they developed their character by telling their purpose of serving someone. Without them serving someone, they feel they are worthless. I thought it was a cool idea for this movie, and very entertainingly informative. The movie started out very funny, with their antics that we grown to love in these minions, and focusing on three minions named Kevin, Stuart, and Bob, voiced by director Pierre Coffin. It was well animated as we expect with this franchise, and what we grew to love.

The So So: The other characters introduced were cool at first. Like the main villain, Scarlet Overkill, voiced by the beautiful Sandra Bullock. She at first shows why she is a respected villain, and why the minions want to serve her. She has a husband named, Herb Overkill, voiced by Jon Hamm, who is an inventor for Scarlet and provided some extra comic relief for the movie. They were character developed well, but as the story went on. These characters were like whatever. I mean, how good of a villain are you all if you get stopped by some minions and a kid? (More on that later.) For a story that started with a lot of potential, it was formulaic as it progressed to the rest of the movie. It really wasn’t as creative as the first two movies. It almost looked like the writer was really rushed to make the script, or just lost its mojo as the movie progressed. That’s a shame.

What I Didn’t Like: In the first two movies you grow and laugh with the minions. Mainly cuz they come in spurts throughout the movie. Now that they have their own feature, maybe too much of them was too draggingly long. You get tired of their schtick, and their non English. You end up almost hating the minions (almost). The other thing that bothered me about this movie, is that the reason the first two movies were pretty good, is because you get a lot of emotion from the first two movies. How Gru, voiced by Steve Carell, grows a relationship with the girls really does hit close to home. For this movie, you get none of that, not even a little bit. Before I saw the movie, I predicted that the emotional part will be when the minions meet Gru. I was completely wrong, and that is unfortunate. The meeting with Gru, who was a kid that defeated Scarlet, was just a funny scene. The minions find a new master, and followed him, much to his chagrin, and that was it. I was hoping for something more epic, and ended up disappointed.

Overall: Too much of the minions is overkill (pun intended). If this franchise wants to keep going, they probably need to concentrate more on Gru and his girls. Right now, Pixar is winning in the animation department for this year, and a step back for Universal in a franchise that really put their animation team on the map!!! 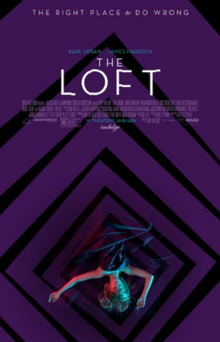 (Sidenote: The Loft- This was a mystery movie involving a good cast of Karl Urban, James Marsden, Wentworth Miller, and Eric Stonestreet. About five unfaithful sleazeballs owning a loft for them to do sinful things (like cheating on their wives.) When a murder happens, it is a who done it type of story which I always enjoy. The movie was interesting at first, but the way it was formed can get pretty confusing to follow sometimes. It had one good twist which kept me engaged, but their second twist was like whatever, and led to a stupid finale. The more you watch this movie, the more you start to hate the characters, and have no empathy for them. That’s not good for a movie. At least it keeps you interested which may be worthwhile gor some of you all.
Rating: 3 Stars)