Ant-Man is a fun and funny popcorn movie for everyone to enjoy, it is a little predictable, but you won’t be bored watching this movie.

It is about time they introduce this superhero in the Marvel Cinematic Universe (MCU). Comically speaking, he is an original team member of The Avengers. I was always intrigued by his special power, and how unique it is. I like how the stories play out as a vital team member for The Avengers. I also liked the stories about Dr. Hank Pym, and how is genius intellect helped him to create the suit and the shrinking serum called Pym particles. His character development in the comics have really became darker and darker as the superhero moves on. I was slightly disappointed that he won’t be the Ant-Man in the movie, and it would be Scott Lang, but i had my trust in the MCU that they know what they are doing. I thought that their marketing and trailers were smart and creative which reestablished my hopes in this character who is finally getting his due on the big screen. I’m happy to say it didn’t disappoint.

What I Like: Let’s start off by saying that Paul Rudd made a good Scott Lang and playing the superhero Ant-Man. He had the acting chops, charm, intellect, and hilarity to play this role perfectly. Also, surprisingly, how much in shape he was for this role. His character as a former thief trying to make something better of himself was executed perfectly. Especially showing that special relationship with his daughter Cassie, played by Abby Ryder Fortson, shows his true intentions to do good and what’s best. I believe he will contribute greatly to the MCU, and add a little flavor to these new superheroes that are coming in soon. The rest of acting I enjoyed as well. Starting with Michael Douglas as the old Dr. Hank Pym. Just the way his character was developed was very true to the comics, and what Hank Pym is all about. He is a genius almost to Tony Stark’s level who worked for S.H.I.E.L.D., and invented the Pym Particle that can shrink a person, but still has strength of a regular human. It shows his stubbornness throughout the movie, but stubborn for a good reason. I would hope they make a prequel of a young Hank Pym taking on the Ant-Man, but I will take what they have now. I enjoyed Evangeline Lilly as Hank Pym’s daughter, Hope van Dyne, who shows the dysfunction father/daughter relationship between herself and Hank Pym, but also knows the good intentions to do what’s right and for the sake of the world. Cory Stoll playing the villain Darren Cross and eventually Yellowjacket was pretty good to watch as well. He is also a genius whom Hank Pym put under his wing in his company, but ends up screwing him over Steve Jobs style with Apple. Right from the beginning it shows how greedy and insane he really is, and the twist that he is working with Hydra to sell his own version of the Pym Particle in his Yellowjacket suit. As usual with villains, his greed and insanity got the best of him, and lead to his death. Other actors I enjoyed was Michael Pena playing Scott’s best friend, Luis. He provided most of the comic relief in the movie, and I really enjoyed his explaining the situation montage which was cool and funny to watch. Even Tip “T.I.” Harris playing Dave had a good role which he did well. The story of this movie is very simple heist movie which is something that the MCU hasn’t seen yet, and why I believe it is a breathe of fresh air, You see Hank Pym training Scott Lang to be Ant-Man, and plan to steal and destroy everything that Cross has created, cuz he believes he will make the world a lot more dangerous. It worked very well, but what i really enjoyed is how funny the whole process went down. It was almost a comedy movie, which director Peyton Reed is really good at doing, and mixed in some good dramatic moments which I thought was appropriate for the movie. The action to me was great. The scenes where Ant-Man is small was great to watch, it was like Honey I Shrunk the Kids, but with today’s special effects, and it worked wonderfully. Also seeing him relating to the ants was cool to watch as well. A lot of the action scenes were hilarious, like the toy train scene with Thomas the Tank Engine really gave you some pure entertainment. The Baskin Robins scene was hilarious (and a huge advertising scene). I also enjoyed seeing Ant-Man fighting with Falcon, played by Anthony Mackie, which gives you a glimpse of what the future holds for Ant-Man. I liked the scene of seeing Hank Pym with his wife Janet van Dyne/Wasp played by Hayley Lovitt, and showing what really happened to Hank Pym, and how emotionally distraught he became. it also created a mid-credits scene of finally seeing The Wasp costume given to Hope, which we can look for in the future. It also leads to showing the subatomic quantum realm which was cool to see Ant-Man in. The movie though it is a good stand alone film for the most part, it had some Easter Eggs you can get excited about. Stuff like Ant-Man joining the Avengers, a reference to Spider-Man, possibility of seeing Giant-Man, a possibility of seeing Janet van Dyne, and most of all the end-credits scene of Captain America, played by Chris Evans, having The Winter Soldier captive, played by Sebastian Shaw, and telling Falcon not to contact Tony Stark, and Falcon telling him he got an idea. This will lead up to Captain America; The Civil War which I believe will be extremely epic. Can’t wait.

The So So: The movie had some predictability which i called way before it happened. Like Ant-Man will be in the subatomic quantum realm and use his growing mechanism to get out of it. I knew the tank key chain was a real tank as well. However, I enjoyed the way they executed the scenes to make it entertaining to watch even though you knew it was going to happen.

What I Didn’t Like: Bobby Cannavale playing the cop Paxton had to be the worse cop i have ever seen. What really got to me was that Hank Pym told him that people will die if he doesn’t go in, and yet when Dave steals the cop car, he made it his priority to get his car back then to finding out what Pym is really trying to say, With those kinds of cops, terrorists will have a field day on us. (Thankfully in real life, cops are nit that dumb, and for the most part make the world a better and safer place, unlike Paxton.)

Overall: This movie is another good movie for the MCU, it may not be one of the greatest in the MCU, but it does give a different angle and character that keeps this new wave going instead of being dull. We need freshness, and that;s what Ant-Man did. As Phase 2 of the MCU is closing, we get ready for the start of the humongous Phase 3 which starts with Captain America: The Civil War which will be epic. We also have the TV shows that can keep us aloof with everything with Agents of S.H.I.E.L.D., Agent Carter, and possibly the Netflix shows of Daredevil and AKA Jessica Jones before that movie happens. I can’t wait, and as of right now, I’m glad Ant-Man finally got his due with a good movie, and looking forward to see him in more action in the future!!! 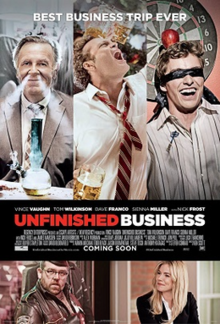 (Sidenote: Unfinished Business- So far comedies has been real dull this year, and this movie was no exception. It stars Vince Vaughn as businessman doing what Vince Vaughn does best, talk you ear off. It also stars Tom Wilkenson who plays a clueless old guy, and Dave Franco as an idiots to say the least. They all are trying to close a big business deal, in which you can root for them, however, the comedy as pure misses, and really wasn’t that funny. The movie really got boring after a third in. It got to a point where the big emotional parts were whatever, and was relieved when the credits came.
Rating: 2 Stars)