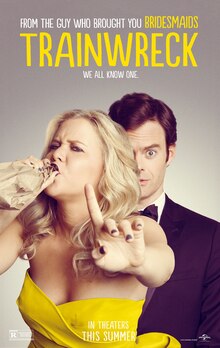 Trainwreck had a tough time picking to be a romantic comedy or just a comedy, depending how you look at it, it has its moments and bright spots, however, not enough for me.

Judd Apatow has been a personal favorite director of mine. In his movie he knew how to balance comedy, with charm, and real life. He makes the most basic things really funny and thought provoking. I for the most part enjoyed his movies, especially Knocked Up. He goes by a good formula that works. Now he teams up with Amy Schumer whom I haven’t heard about until recently, and wanted to see what she got. She did write the script, and teaming up with Apatow is a win-win. Not so fast.

What I Like:Let me start off with Amy Schumer, who plays Amy Townsend, whom I have no idea about her until she hosted the 2015 MTV Movie Awards (might as well call it the teenage girl’s movie awards). I never seen her stand-up, or any other show in it, so this was something new for me. I thought her acting was great. Her type of comedy was perfect for a Apatow movie, and had some funny lines. However, what really got to me was her dramatic acting. The one scene where she gave a eulogy at her father’s funeral was very touching, and she spun it in her own way which worked out nicely. I can honestly say we have another Melissa McCarthy in the making. She has that potential, and we have to wait and see where it goes from here. I also enjoyed seeing Colin Quinn playing Amy’s dad, Gordon Townsend, who has MS. I thought he was hilarious with his raunchy and racial humor. He pretty much was the typical old New Yorker which Quinn is really good at portraying. When his death cam, it really created a touching and emotional moment. I also thought the chemistry between Amy and her sister, Kim Townsend played by Brie Larson, was very genuine. They had that relationship that any sibling would have, and it was another bright spot for the movie. There were many funny cameos that involve a lot of comedians. I personally enjoyed seeing Dave Attell playing a homeless guy named Noam. His homeless signs were subtly hilarious. John Cena playing one of Amy’s boyfriends named Steven. I thought he was funny, and the gay jokes were tastefully good. A weird cameo involved Daniel Radcliffe and Marisa Tomei playing in a black and white movie about a dog walker was interesting to watch. Also Marv Albert’s cameo was hilarious as well.

The So So: Bill Hader played Amy’s main love interest as a respected sports doctor named, Dr. Aaron Connors. When their relationship progressed, it really created an awkward chemistry between them. Maybe that was the purpose of the film, but it was just a little too awkward that affected the movie a little bit. Honestly, maybe it is because of the weird persona of Bill Hader that makes it that way, cuz I still see him as that Saturday Night live actor, and it hasn’t rubbed off of me yet. I guess that relationship worked for a time, but it started getting annoying after a while. Maybe they could’ve casted somebody better in my opinion.

What I Didn’t Like: The story of this movie was a mix of romantic comedy and drama, and it really didn’t know where it wanted to be, It kept going in and out, and it got really annoying for me. Maybe if it kept on one tone, and added the dramatic scenes where it is appropriate, it could’ve flowed better. It’s unfortunate cuz i thought the dramatic moments were good, but the romantic comedy part was too dumb with a lot of their jokes as misses. I also thought they didn’t character developed Amy well either. We knew what she stands for at the beginning, but didn’t quite explain her transformation into a better being. It was like a slap in the face, and there she is. How can we relate to a character, when we not sure how she is and why she is that way. That is bad for a movie. This movie didn’t have enough moments for me to care about this awkward couple, and I kind of lost interest at the end. Some of the cameos involved in this movie were athletes, and they can be horrible actors. Most notably, Lebron James playing a patient and friend to Dr. Connors. His lines in the movie were funny, but his acting made it horrific. Apatow explained in an interview how hard it was to direct his voice in the movie cuz he had a deep voice. I personally think Apatow just gave up on him after a while. Amar’e Stoudemire had a cameo as a patient as well, and his acting made Michael Jordan’s role in Space Jam Oscar worthy. There was also a cameo of Method Man playing a nurse with an African accent. (Yeah you read that right.) That got too weird as well, one of my favorite rappers not only playing a nurse, but with an accent. It was too weird for my liking, and it did bother me.

Overall: This movie had potential, and it could’ve been real good, but it just didn’t do it for me. There were some bright spots that we can look for, but as far as this movie goes, it was a sore spot for me. People could disagree with me, but this was my honest opinion. I see the potential in Schumer, but I hope Apatow can come up with a better movie with his writin stamp of approval for his sake!!! 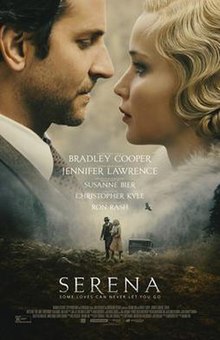 (Sidenote: Serena- Add this movie to the so boring you can fall asleep section. This movie had my interest because of the the pairing of Bradley Cooper and the beautiful Jennifer Lawrence once again. However, that was the only bright spot in the movie about a couple enduring their logging business during The Great Depression. I wish i could say more, but I can’t the movie is just as boring as working as a logger, They couldn’t even have a logging accident scene to retain my interest. It is unfortunate and disappointing that this movie didn’t live it up with its strong casting. It is what it is.
Rating: 2 Stars)