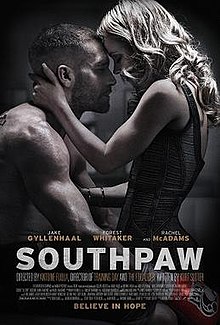 Southpaw story may be weak and typical, but the tremendous acting and fighting scenes really held the movie’s ground.

Out of all sports movies it seems that the sport of boxing has made some classics. I may be wrong, but sports movies about boxing always get the Oscar considerations. Baseball movies made some classics as well, but the only one that I know had Oscar consideration is Moneyball, and that is a movie about a general manager. I always love a good sports movie that is thrilling and engaging. Even though you may know the outcome, if you still enjoy the ride, the movie did its job. Boxing movies have been a personal treat for me. Every time I see a boxing movie trailer, I know I have to go see it. The sport of boxing has made some classic movies like Raging Bull, The Fighter, The Boxer, million Dollar Baby, Cinderella Man, and of course all the Rocky movies (though people seem to forget that Rocky V ever happened and Rocky Balboa is the true number V movie in the Rocky series). All the fight scenes are crafted epically, and I personally enjoy seeing punches thrown, and spit and blood splattering all around. I guess it is the Barbarian in me to enjoy these kinds of things. Even though the sport of boxing in my opinion is dying, and Mixed Martial Arts is rising, I love the sport of boxing and the movies it brings. It will always have a place in my heart, and every time, it gives me inspiration to go into the sport myself (though I never do it, but maybe one day). Until then, I will enjoy what any boxing movie brings to the table. With Southpaw, after seeing the trailer during the Floyd Mayweather and Manny Pacquiao fight, I knew I have to go see it. It looked awesome, and with a great director in Antoine Fuqua, a great writer in Kurt Sutter, and a great actor in Jake Gyllenhaal. I knew I had to see it. It didn’t disappoint.

What I Like: Let me say that the acting in this movie was on point. Jake Gyllenhaal playing boxer Billy Hope was some of the best acting I’ve seen from Gyllenhaal, and that is saying a lot. I can honestly say that it is an early Oscar worthy performance playing a mentally struggling boxer dealing with rock bottom. I also enjoyed Forest Whitaker’s performance as boxing trainer Titus Wills who became Billy’s voice of reason after his wife passed. Shows compassion to Billy cuz he went through a same phase, and created special moments with each other. I would like to say that Whitaker’s performance is Oscar worthy as well, but honestly, it is way too early to say. (Though I can already say I liked his performance over last year Oscar nominated performance of Mark Ruffalo in Foxcatcher.) Seeing Billy’s chemistry with his wife Maureen, played by Rachel McAdams, and his daughter Leila, played by Ooana Laurence, made a lot os special drama moments in this movie. Just the acting alone really makes this movie a good watch. I also enjoyed the fighting scenes which for a boxing movie has been one of the bloodiest since Rocky IV. It was pretty thrilling to watch (unlike the overhyped Mayweather vs Pacquiao fight), and it was on the level of the other great boxing movies. The training scenes were a joy to watch as well, and it did give something different. Director Antoine Fuqua really choreographed the fight scenes well for a movie, and with him you get the best from the actors he work with.

The So So: The story of this movie is bleak or subpar. Their main angle is a guy who had it all, and then lost it all, and works to get it back. I just wished that the story can explain some things better. Like why Billy was going bankrupt and why his daughter started resenting him when she went to child services after maybe a week or two of not seeing him which is not that long in my opinion to have these types of feelings. One thing I do give credit in this movie is that they developed their characters very well to really overlook those questions. That was key for making an ok movie, to a decent to good movie depending how you see it.

What I Didn’t Like: For a boxing movie, it had it’s great share of cliches. The Rocky approach of struggling early, and people writing him out, and he makes a big comeback. The all boxing movies approach of the main character winning by an epic knock out (though I give them a little credit for the opponent to stand up in time and make it go to decision). (Also let’s be real, you wanted to see Billy knock his opponent, Miguel Escobar played by Miguel Gomez, unconscious after all the trash talking and stuff he did to Billy.) One thing I really wasn’t feeling is the acting of Curtis “50 Cent” Jackson, playing boxing promoter Jordan Mains. He wasn’t that convincing to me, cuz all I see is a rapper trying to act. Though his acting is better since Get Rich or Die Trying, but that’s like saying you improved from a grade of F to a D- in a test you retook. Also, I wished they explored more of the angle of Rita Ora’s character playing Miguel’s drugged up wife. I can’t base her performance well because so far her two minutes on screen was not too convincing and I needed to see more. Maybe it would’ve been too much of a distracting subplot if they did, but can’t give a good opinion for it. I researched that rapper Eminem was suppose to play Billy for this movie. They dodged a big bullet there, and maybe Gyllenhaal saved this movie. Though I find it weird that they went from a C list actor to an A list actor. That’s a big change, but maybe they budgeted for the best, but Eminem would’ve made this movie less than mediocre for sure.

Overall: The movie holds it ground as a good watch just by the acting and fight scenes alone. If you’re a fan of boxing as I am, you will enjoy and appreciate this movie. Gyllenhaal gives a great performance, and helps you forget the bleak and mediocre storyline. Maybe I should finally get into boxing now, maybe!!! 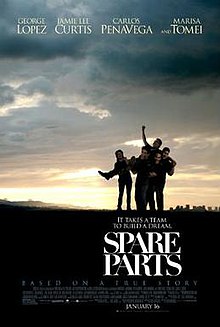 (Sidenote: Spare Parts- This movie starred George Lopez as a former engineer becoming a substitute science teacher. (Yeah, you read that right.) I thought this movie was actually decent and inspiring to watch. Yes it had their cliches, corny moments, and a rushed storyline, but the payoff in the end of seeing a group of guys from immigrant families trying to compete against a robotics competition against top notch colleges and win was inspiring especially for my Latino people. It is a true story which makes it even more inspiring of hope, hard work, and working with next to nothing. A decent watch for everybody to enjoy.
Rating: 3.5 Stars)