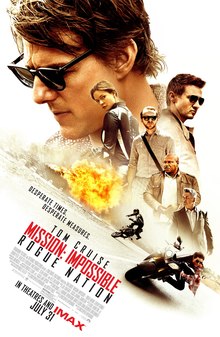 Mission: Impossible- Rogue Nation had some great action that we grown to love in this franchise, though I find the forth movie a lot more thrilling, this movie is a lot more intelligent for people to enjoy.

Although I never seen the TV Show, just by the movies I have grown to love the Mission: Impossible franchise. Not sure why they continue to call it Mission: Impossible when they made five movies where they made their mission possible, but they have to be my favorite Tom Cruise’s movies. The action is always great, with edge of your seat thrills, and the pure entertainment it gives (even the second movie). After the first three, I was pretty satisfied and was ready to move on, but when it was announced that they were making a forth film, I thought that they were doing too much. I thought that they were stretching this franchise too long, and it would put a damper to this respectful franchise. However, the fourth movie, Mission: Impossible- Ghost Protocol, really blew my expectations out of the water as the best movie of this franchise so far. It showed that they can still make a great movie with the character Ethan Hunt, and still be greatly entertaining. So when they announced for a fifth movie, I was already intrigued and ready for another wild ride. It didn’t disappoint.

What I Like: The Mission Impossible franchise is known for its action, and this movie is no different. The movies is known for its tense scenes, and probably the most intense scene was when Ethan Hunt, played by Tom Cruise, had to go to an underwater security server to change the key codes for Benji Dunn, played by Simon Pegg, can get through security. They had three minutes to make that happen, but seeing Ethan going through some major obstacles to make it happen, was fun and crazy to watch. It was another narrow escape from death for Ethan, but Mission Impossible loves to keep you on the edge of your seat. This movie was intelligently written with so many twists that worked with a lot of effect. Especially in the third act, on how it all went down to finally destroy the secret evil agency called The Syndicate. The way both sides tried to one up each other was cool to watch. Even though there was no action, it crazy to see these scenes progressed for the Impossible Mission Force (IMF) to come out on top, even though their own government stopped supporting them. The best twist which really made this movie was at the very end, where Alan Hunley, played by Alec Baldwin, who was responsible in stopping the IMF from government support, and now was asking for the IMF to be reinstated saying that he did it on purpose so Ethan can go deep undercover. During those Senate trials, William Brandt, played by Jeremy Renner, was always there to support the IMF, but doesn’t disclose information with the excuse, “I can’t neither confirm or deny without my Secretary’s consent.” When the IMF was reinstated, he called Hunley Mr. Secretary. It was awesome to see that twist where it was all planned all along from beginning to end. It really made the movie. The acting was great, Tome Cruise as Ethan was always cool, calm, and collected (with running and motorcycle scenes galore). Simon Pegg as Benji providing the comic relief. Ving Rhames as Luther Stickell having a bigger role as the major tech guy. Alec Baldwin as Hunley, the supposedly official to stop Ethan. Jeremy Renner as Brandt, the ambassador for the IMF and part of the team. They also introduced a new girl in Ilsa Faust, played by Rebecca Ferguson, who added to the twists where we keep guessing whether she is for or against the IMF.

The So So: The most hyped scene from the trailers was when Ethan was hanging on a carrier plane as it was flying away trying to get a package from the plane. It was intense (with Tom Cruise doing his own stunt for real, youtube it) but they did it right at the beginning of the movie, and it was done. For a hyped scene it was quick, but it did start the movie off with a bang. I wasn’t really feeling the villain for this movie. Solomon Lane, played by Sean Harris, is the head of the Syndicate who are really terrorist for money, and do it with the most damage necessary. To me he wasn’t that menacing as a villain, but he was smart and seem to have one up against Ethan until Ethan prevailed. However, intelligence doesn’t help when you are using it with a corny and squeaky voice that sounded annoying to me. If I was Ethan i would just beat his face in and call it a night. There were better villains in this franchise quite honestly. Even though the movie went with the intelligent approach with twists, I thought the Mission: Impossible: Ghost Protocol was a lot better and definitely a lot more thrilling. So this movie kind of failed in that regard, but it is still a good movie regardless.

What i Didn’t Like: The same old movie cliche where the enemies are trying to kill the good guy, but it seems their aiming sucks even though some are military experts. For this movie it was almost obvious. I mean during the plane scene where the guy sees Ethan and let’s go the parachute to escape with the package, the dude didn’t even shoot. I mean really now, worst guard ever.

Overall: This movie may not be the best in this franchise, but it is still a goodie. If you love a smart and intelligent plot with good twists that would make M. Knight Shyamalan shudder, you will enjoy this movie. It puts another classic in this very well respected franchise!!! 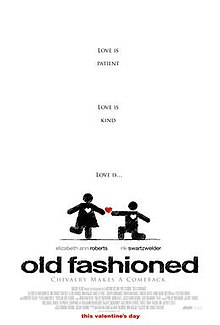 (Sidenote: Old Fashoned- This is a Christian movie about dating and relationships. The movie did convey a good message which I grasped with insight. However, the guy who is “old fashioned” really was way too conservative to make this movie corny, and put a free spirited woman to the mix really makes for some unwanted laughter. The movie really plays it stereotypes with a passion which almost made it unrealistic. As I said before though, it did bring a good message when you give this movie a chance and ignore the corny parts about responsible dating.
Rating: 3 Stars)