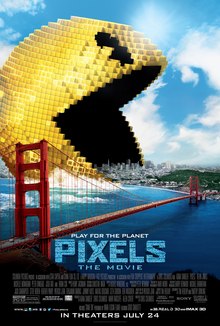 Pixels comedy may be stupid to say the least, but I thought the video game action was entertaining and paying homage to the Arcade era was cool to watch.

I was born in the Arcade era in the 80’s. I believe it was a great time to be a kid, collecting quarters, going out, and play till you run out of quarters. It was a great time. To me, my experience with video games started with Nintendo with games like Super Mario Brothers and Duck Hunt. Those were my games which i came to love. As for arcades, it started for me in the 90’s with games like Street Fighter, Mortal Kombat, Ninja Turtles, and even The Simpsons game which I loved playing in Chuck E Cheese. Video games has been a big part early in my life, and still today, i enjoy a great game. The track record for video games becoming movies hasn’t been great though. Some major flops like Super Mario Brothers, Mortal Kombat: Annihilation, and Street Fighter (which I loved as a kid, but grew up to see how horrible it was). It seems that they can never get it right with movies. With that said, I do enjoy some creative video game type of movies like Tron and Wreck-It Ralph. This is probably the way to go with movies about video games. So I am easily intrigued when I saw the trailer for Pixels thinking this will be a fun movie to watch. I was sort of right.

What I Like: I actually enjoyed the video game action of this movie. To me it was fun and entertaining, and pays great homage to the Arcade era which was almost nostalgic. I’m sure true gamers will appreciate this movie. I enjoyed the scenes involving the games Centipede and Donkey Kong. My favorite battle is the one with Pac-Man. I liked how they involved it Mini Coopers as the ghosts. It was almost like a scene from The Fast and the Furious franchise only with Adam Sandler as Vin Diesel (I know it sounds ridiculous, but bare with me). I thought director Chris Columbus choreographed each scene very well, and the special effects were really good. With a movie named Pixels, that what you have to expect, a lot of pixels for your eye that I enjoyed. To me this made the movie watchable. I also enjoyed seeing Q*bert interacting with the human characters on the film. It gave good hearted and funny moments that enjoyed as well. There were also some funny cameos involving Serena Williams and Martha Stewart.

The So So: The acting was a give or take. You get Adam Sandler playing Sam Brenner, the usual guy not happy with his life, but becomes a national hero. Adam Sandler played his typical acting self in his movies nowadays, which can be dull, but he did crack a few one liners that make me chuckle. You have Kevin James as US President Will Cooper. A guy who is pressured by the media as the worst president since George W. Bush, which really made me wonder how he won the presidency in the first place. You have Josh Gad playing Ludlow Lamonsoff, an oddball conspiracy theorist. To me he was the best part of the movie playing the awkward nerd. His obsession over video game character Lady Lisa is weird and creepy to see those scenes go down. Lastly, you had Peter Dinklage playing Eddie Plant. A former video game king, who went to jail, but is pardoned to save the world as well. He was my least liked character in the movie, because he acted like a douche for the whole movie. Though I like the twist of how he uses cheat codes to be the video game king which gave his character justice.

What I Didn’t Like: The comedy of this movie was not funny. it may have some witty one liners, but this movie really missed the target on a comedy standpoint. Even for Adam Sandler standards, I expected more, and want to laugh. Didn’t get to, and that’s  a shame. The chemistry between Sam and Violet, played by Michelle Monaghan was nonexistent. It felt forced and ungenuine. Maybe Drew Barrymore would’ve helped in this movie. The fact that Ludlow and Lady Lisa got married and had Q*bert kids was just plain weird and stupid. How do cheat codes help with a real version of Pac-Man with Mini Coopers is a big mystery to me. Lastly, I miss the cameos of Rob Schneider in Adam Sandler movies, instead you’re getting a lot of Dan Patrick cameos which I wish he would go back and be an ESPN anchor than cameoing with Adam Sandler.

Overall: I didn’t think this movie was that bad. The action makes this watchable, and that’s about it. Critics will pan it because I believe they have a vendetta against Adam Sandler, but I’m not a hater. I just wish I would have the Adam Sandler of old, where i believe he is actually trying. (Man I miss the Happy Gilmore and Billy Madison days!!!)