Straight Outta Compton is a good trip down memory lane seeing the history of West Coast Hip Hop coming to function, and the political impact it took, a little rushed and messy at the end, but the point is clear, and enjoyed the music.

When I was a kid, I used to live in the Los Angeles area. I consider myself a Boston man, but some of my roots are from the city of LA where I grew up as a child and has some west coast personality that comes out of me sometime. I lived through the worse, the smog, LA riots, and the earthquake of 94. So it is safe to say, I lived through the worse of it. One thing I do remember is the music. Dr. Dre and Snoop Doggwas one of the first hip hop artist I heard, and really became into it. Soon Ice Cube came in and eventually NWA and of course Tupac became the classic. It was a big part of my culture. Hearing this music with popping lowriders is part of my childhood culture which I cherished. When I heard there was going to be a movie about NWA, I was in. I knew this was going to be nostalgic, and a walk down memory. Thank goodness, the movie was actually good.

What I Like: The casting of this movie is pretty strong. The movie really focuses on three members. They had Ice Cube’s son, O’Shea Jackson, Jr., play his father Ice Cube. Had the same scowl and everything. Cory Hawkins played Dr. Dre. The unique beat maker and producer. Lastly, they had Jason Mitchell play Eazy-E, the owner of Ruthless Productions, and a hustler at the beginning. These three guys are the heart and stone of the rap group NWA, and what they have to go through to become icons. I really enjoyed the music in the movie and how it was created. Songs that really brought me back down to memory lane with songs like, “Straight Outta Compton,” “Express Yourself,” “Ain’t Nuthin But a G Thang,” “California Love,” and the most historical and iconic song, “F the Police.” Hearing these songs really brought me back to my childhood west coast days. There were many great moments in the movie, like the start of the rap group, meeting the shady manager Jerry Heller, played tremendously by Paul Giamatti, the death of Eazy-E, and Dr. Dre joining Suge Knight, played by R. Marcus Taylor, to start Death Row Records and the craziness it comes with it. With all that said, my favorite moment was when NWA was forbidden by Detroit cops to perform the song, “F the Police.” They decided to do it anyways. You hear Ice Cube saying, “Yo Dre, I got something to say,” and it all went down with them starting a riot. To me this was a powerful moment, cuz that song is still relevant today about police brutality with things that are going on now. It also showed the Rodney King beat down, and the riots that started in LA, (which I was there when it happened) and showed a scene where the Crips and Bloods join together to protest the cause. That song is iconic not only in history, but in literature as well. I enjoyed seeing this in action. I also enjoyed seeing other fellow rappers in the movie like Snoop Dogg, played by Kieth Stanfield, Warren G, played by Sheldon A. Smith, and my personal favorite Tupac, played by Marcc Rose. Director F. Gary Gray really captured the essence of these rappers and really showed how LA was in the late 80’s and early 90’s.

The So So: The movie started very well with the character development with these rappers. Showing how important NWA was in not only on West Coast hip hop, but in music history. The politics that go with them was showed very well. However, right after Ice Cube left the group, it seems that they rushed the movie to end. The movie lasted for 2 and a half hours, but they try to cram every moment possible which made the difference from a good movie to a great biopic, and unfortunately it wasn’t great. Still a good watch, especially for the fans of NWA.

What I Didn’t Like: Maybe I’m being nit picky, but there was one song that wasn’t there and got me really disappointed. One of my favorite songs ever wasn’t showed and that is Ice Cube’s, “Today Was a Good Day.” They practically showcased all their great songs, but they didn’t showcase that iconic song was disappointing.

Overall: If you grew up or was a fan of West Coast Hip Hop, you will enjoy this movie. I am, and that’s why I enjoyed it immensely. It was nostalgic for me, and see why NWA are iconic in music in general, even today!!! 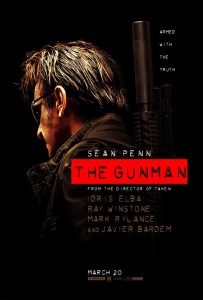 (Sidenote: The Gunman- This movie has a solid cast with Sean Penn as a former sniper assassin and Javier Bardem as a former friend that became a traitor cliche. Unfortunately, the movie was confusing and boring when I expected to be entertained. It did set up a cool final scene involving bulls, but it was another whatever movie with great actors.                          Rating: 2.5 Stars)