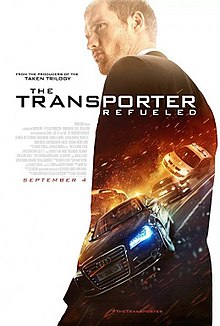 The Transporter Refueled is the best one since the first movie, with decent action, decent writing and story, until the third act it was fun to watch, but I can’t help but think how much better this movie would have been if Jason Statham is still in the lead.

Ah yes, The Transporter franchise. I give this franchise credit for upstarting Jason Statham into stardom. The premise of the movie is definitely intriguing, about a guy who gets paid to drive no matter what or who it is, as long he gets his money and follows his code (which pretty much doesn’t happen in each movie). It introduced me to the gritty acting of Jason Statham, and see what he has as an action actor which is entertaining if the direction is done right. It was a rocky start for Statham for me mainly because I hated how fake the action was in these movies. (Especially in the second movie where he jumps a car of a ramp, flips it over, and manages to get a hook on a crane to take a bomb out from under the car.) These movies can be too much, but still entertaining with showing the new things when it comes to cars (like the semiautomatic buttons on the steering wheel). When Statham moved on, his role became a lot better, but he does have this franchise to thank for propelling his acting career. Now they decided to make another movie in this franchise, but recasting the character of The Transporter which I wasn’t to thrilled with. I thought this one will be worse than the others, but that is why you watch the movies.

What I Like: For a movie that is known for their outrageous stunt scenes with crazy CGI, I thought this movie was a little more grounded in their action which I enjoyed tremendously. Yes it still has it, “that can’t happen in real life,” moments, but for the most part it was a breathe of fresh air for this franchise. Director Camille Delamarre found a good balance of action and special effects to show in this movie. We came to see some driving action, and we definitely got that. The fighting scenes had a good balance of shaky cameras and regular action which to me was perfect and in good taste that won’t give you a headache. It really came back to what the first and original movie had to offer, and it was great to see it go back to it’s basis in that regard. I also enjoyed the cinematography of the city of Monte Carlo which really reiterates my interest in visiting that city.

The So So: The story got back to the basics as the first movie offered as well. It was smart and interesting, and it involved a lot of beautiful ladies. It had some minor twists that kept the movie engaging. However, once it got to the final scene it got a little sloppy with it’s execution. It seemed like the writers rushed into how to end the movie, and just picked something out of the cliche bag. Cliches like the Mexican standoff that ends horribly for both sides, but the main characters are good without even one scratch. Also, how the main villain gets away, and there is a chase scene, then a fight scene, and once the villain is about to kill the hero, he gets shot by someone else. At least in that scene i enjoyed the scenery of the beautiful beach and ocean in Monaco. I wish the writer took it’s time for the third act, and maybe it would be good as the first two thirds of this movie. The recasted transporter is Ed Skrein who plays Frank Martin. I personally believe he did his best to make the character his own, but keep the mythos of Frank Martin. He did have some great chemistry with his father, Frank Martin Sr. played by Ray Stevenson, which had some funny conversations in the movie. However, it just wasn’t the same as how Jason Statham did the character of the transporter, and it wasn’t enough to make me forget about him. By the end of the movie, it made me wonder how much better the movie would have been if Statham was still at the helm. Probably it will help the movie tremendously. The key part of the story was the character Anna, played by Loan Chabanol. She was the mastermind of making a plan to enact revenge on the villain by stealing his money,eventually killing him, and using the transporter for help. Her character was a little underdeveloped to her revenge, but we do get the point that she was forced into prostitution since she was young, and pretty much just grew tired of him. She was smart, but her chemistry with the other characters were a little cheesy, and really rolled my eyes when they kept quoting The Three Musketeers.

What I Didn’t Like: After the third, act the movie did take a turn for the worse. which really made a difference from a good/decent movie to just ok. The main thing is because it shows how weak the villain really is. In the beginning of the movie they showed their muscle in taking over the prostitution business, but that is about it. Throughout the whole movie they showed how weak they really are by being easily fooled, by their girls who work for them, and how easy they can turn on one another after 15 years of business. The main villain, Karasov, played by Radivoje Bukvic, really didn’t show why he is the main villain. He wasn’t menacing enough, and really just panicked when things go wrong. How good of a leader are you if the rest of your crew will turn on you once a little trouble starts. There is no trust. Maybe all the money and beautiful women fried their brains, and got easily bamboozled by the girls that enacted revenge on them. Justice is served in an underwhelmingly fashion. Also, that last scene where Anna had to kill Frank to tie up loose ends, but ended up not because of “feelings,” that really turned me off when that part happened, and with the big cliche of tough woman falling in love with her contracted (though forcefully) worker. It’s whatever.

Overall: The movie is good enough watch if you’re a fan of the franchise (especially the first movie.) With some grounded action instead of the outrageous. I just believe that Jason Statham’s gritty acting would’ve made this movie a lot better, but at least the writing of this movie made it decent to watch!!!