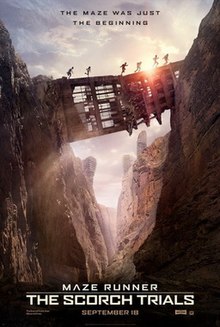 Maze Runner: The Scorch Trails may have some thrilling action, but it really was just a filler movie to cram in all the information they can into movie to set up for the next movie, which made me really delirious.

As we continue on watching teenage book series made into movies, I start to see a trend where it can be a good thing or a bad thing. They try to make it a trilogy, and somehow extend the last book into two movies which I hate it when they do. Usually what happens is that there is one movie that is the weakest of the bunch, and it is mainly made to be a filler. A filler to get all the info they need to develop the next movie, and supposedly get you excited for what it is next. Filler movies can really just be a waste of money and maybe time, and really is a ploy from Hollywood to make more money. As long as it sells, it will continue. I personally don’t like it, but in the end, the payoffs are usually pretty good, and makes the series worthwhile to go through the pain of a filler movie. For The Maze Runner, i enjoyed the story of the first movie, until the confusing ending if what is going to happen in this trilogy (or the unnecessary 4th movie). You’re just waiting for that filler movie in this franchise, and it really came sooner than expected for me. Not really a good thing.

What I Like: The movie did have their share of good action. Really starting with the introduction of the zombies like creatures called Cranks who are infected by a virus called the Flare. These Cranks were very creepy, and very agile which created some thrilling action scenes of the main characters trying to defend themselves. It was definitely some edge of your seat scenes that really gave the series a different angle to work with. I also enjoyed the final battle scene with the corrupt experimental group called WCKD, versus the people against them called The Right Arm. The battle scenes were thrilling and fun to watch as well, and once again showing a different angle for the franchise and showing where this movie will go in this trilogy. Just these action scenes really made this movie at the very least watchable and interesting. The acting was good, and all the returning characters reprised their roles well, and show why we really care for them. The twist in the end shows the real problem between WCKD and The Right Arm, and why each side does have a purpose that makes sense, but it really comes down to human ethics in trying to find a cure for The Flare. It does set up well for the third movie, and i appreciated that they made a decent ending, and not leave it on a cliffhanger which I hate so much when movies do that.

The So So; After the way the first movie ended, you wanted some major answers to what the heck really happened. It did explain and gave some clarity, but their main focus was there journey by escaping the WCKD facilities, and crossing a destroyed city called The Scorch which had Cranks walking all over the place. They were trying to get to the other side through the mountains to find the rebellion resistance called The Right Arm, and the main emphasis of this movie really concentrated on their journey, Their journey was fun to watch, but you were still trying to get answers to what is really going on. (This leads me to what I didn’t like). I do give it credit in the beginning of the movie showing why WCKD is wicked (pun intended) and why the main characters needed to escape.

What I Didn’t Like: When the movie tries to answer questions to what is really going on, they decide to cram everything in certain scenes. Mainly in the third part of the movie.where everything is explained, and they introduced many new characters. Honestly, a lot of these new characters were under developed, and really didn’t show their true purpose. They just went along for the ride. The Cranks were better developed than some of the new people they introduced. After all that cramming, and figuring out where this movie will take us, it just had me delirious and giving me a headache with all the new info. Once I had some time to put it all together, i understood where this franchise is going, but I didn’t appreciate going through the headache and delirium. That weird scene where Thomas, played by Dylan O’Brien, goes to a party in the middle of The Scorch which they didn’t really explain about, looking for Marcus, played by Alan Tudyk. That scene just got to weird for me when Thomas goes through hallucinations cuz of the drink he was made to drink to go inside this party that wasn’t explained well to begin with. The under developing made it too mysterious in such a bad way. With all this cramming of information not only made this movie a filler movie for the franchise, but it was a filler movie on steroids that can be bad for your health. I may be sarcastic, but it really did give me a headache to keep up with the movie. Get some Tylenol ready once the movie is done for the headaches.

Overall: The movie was a filler crammed with so much info, but at least you can enjoy the action that this movie brings that involves zombies and war. I just hope that the next movie will give a better pay off, and make this franchise respectable in movie history.