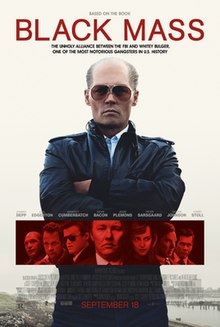 Black Mass is a good and interesting movie that really brought back Johnny Depp to his acting prominence we come to love from before.

Some of you all may remember from my pasts post on how much i love movies filmed in my city of Boston. I love it when a film showcases the beauty of the city that I call home. I’m also not embarrassed for films to showcase the dark, rough, and dangerous side of Boston which many people outside of the city may not know about. It shows that it is not the perfect city. I believe the movie The Departed really showcased the best and worse that Boston has to offer. To me, it was the perfect movie. that made me proud of where i come from. As more and more movies continue to film, I make an effort to see and enjoy this beautiful city. With that said, there is some dark history that really hasn’t been explored yet, and one them is the reign of James “Whitey” Bulger as the biggest crime lord in the city of Boston. When I heard they finally are making a movie about him, and that Johnny Depp was going to play him, I was immediately sold. I was excited to see if this movie can bring a good light into what the city of Boston had to endure during his reign of terror, and I was hoping this will be the role to bring Johnny Depp out of his horrible movie funk. I am happy to say that the movie practically did that.

What I Like: Let me start by saying this has been Johnny Depp’s best acting role since Sweeney Todd. It brought back his niche of acting we all come to love and respect. The difference is that the way he acted was pure solidness, and not with the weirdness he likes to do sometimes. People would argue that Depp can’t give Whitey Bulger justice, but he nailed it. Even though the make up in his role looked weird, he made up for it by playing a cool, calm, and collected but was still menacing even though for most of the movie, he didn’t do the killing. He played a true gangster that demanded a lot of respect from everybody that cross paths with him. He showed loyalty to those who do a great job for him, and his crimes, and why he is an epitome of a true gangster in history. Johnny Depp’s performance as Whitey Bulger has made this movie a good watch, and i believe Depp should get some Oscar consideration for this role (although, i don’t believe he will win it). Director, Scott Cooper really did a great job showing a another beautiful side of Boston and the city of South Boston, but showing the right spots of Boston and how it looked in the 70’s. He avoided showing the new buildings and skyscrapers that were created later, and gve the city a more authentic look. It will bring some nostalgia to my Boston people growing up in that time (it was later for me).

The So So: The story was very intriguing, and the main niche of this movie shows how Whitey Bulger had the FBI let him do whatever he wants in his business of crime. Joel Edgerton playing FBI agent John Connolly played his role of using Whitey Bulger as his informant to take down the Italian mafia, and in return let Whitey Bulger do his business. Of course, it seemed great at first, until Whitey Bulger abused that priveldge that lead to not only Connolly’s downfall as a conspirator, but his downfall as well with his crimes. I liked how the story shows how far loyalty can go, even if it will affect your job or even your life. It showed how gutsy Whitey Bulger is, and how the bad guys just don’t know when to stop that lead to his downfall. The only thing that I was disappointed in is that the movie didn’t really show the big crimes Whitey Bulger committed. Yes they show the murders, and shootings where you least expected, but didn’t really show how he really became a crime lord. They just told you how it happened. In that regard, I was really disappointed with the film. One of my favorite scenes in this movie is when Peter Connolly had Whitey Bulger and his gang to his house for a barbecue, and they started having a discussion between Whitey Bulger and the other FBI agent that was helping with his crime, John Morris, played by Dave Harbour. It started out by Whitey asking him how he prepared his steaks, and Morris responded that it is a family recipe. Whitey kept asking him, until Morris finally revealed the secret recipe. Then Whitey with his cool, calm, and collected voice started judging him on why he will easily squeal when trouble starts with him, and questioning his trust with him. It was a tense scene, and the look on Morris’ face while being reprimanded was priceless. In the end, it was all a joke, but how intense that scene was, and it got to a point where I started laughing. Unfortunately for me, it got spoiled because that scene was shown in its first trailer. I don’t know why the movie producers did that, because it was a great scene in the movie. I wish I didn’t know it was a joke, and it would’ve been edge of my seat thrilling for me. Unfortunately, it was just solid entertainment at best for me.

What I Didn’t Like: I can honestly say I can compare this movie to another gangster classic, The Godfather. My only gripe with The Godfather is the same for this movie is that it had a lot of slow parts that can really drag, until they get to the good parts. To me i don’t have the patience to endure too many slow parts. I like it when the movie gets to the point, and see the action. Maybe for some people they may like it as part of the story telling, but it is not for me. Also, Kevin Bacon playing FBI director Charles McGuire, and Benedict Cumberbatch playing Whitey’s brother, Billy Bulger roles were so minor that it was almost forgettable that they were actually in the movie. (Although, i am impressed with Cumberbatch’s Boston accent in this movie.) Adam Scott was also in the movie as FBI agent Robert Fitzpatrick, but to me it seemed like Scott was miscast for this movie, and really didn’t do it for me, even if his role was minor.

Overall: If you like The Godfather, you will definitely like this movie. Would I say it’s up to par with the other gangster Boston movie, The Departed, I wouldn’t go that far either. Regardless, if you want to see Johnny Depp’s acting at his finest, this is the movie to watch and enjoy. I believe all in all, it did give Whitey Bulger justice of being the notorious crime lord in these mean streets of Boston!!! 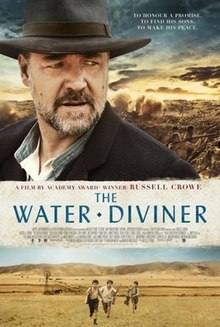 (Sidenote: The Water Diviner- This movie is Russell Crowe’s directorial debut where he also acted as Joshua Connor, a water diviner in Australia after World War I who goes on a mission after his wife passed away to find his three sons who were presumably dead during the war as soldiers, and bring their bodies back to bury next to his wife. The movie started a bit boring at first, but when the story really started to get rolling, it is an interesting movie to see. The twist was predictable, but it did give a lot of emotion, and some cool war scenes. Not bad for Russell Crowe’s directorial debut, but not great either.
Rating: 2.5 Stars)