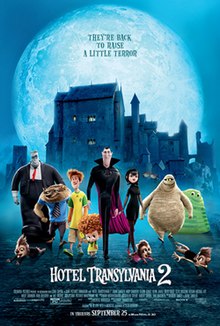 Hotel Transylvania 2 may be beautifully animated, but the story was weaker than the first movie, and the comedy is a hit or miss, even for children.

All i can say is that the first movie was ok to decent. I thought the concept was cool, and the animation was stupendous, but the story just needed more death. They kind of made up with their comedy, but for the most part, it was a subpar movie at best. At times, I question whether this movie can be a little too scary for kids under seven years old. Now that they made a sequel, I once again have the same questions or concerns as the first movie. Unfortunately, it was more or less the same.

What I Like: The animation is the best the movie has to offer. The way they make Hotel Transylvania bring to animated life was awesome. The scenery inside and outside the castle was greatly detailed. The scenes with The Phantom of the Opera, Erik voiced by Jon Lovitz, was very lifelike animated, and funny as well. Director Genndy Tartakovsky did a great job in that regard. I also give credit to the voice acting cast. They all give their best for a subpar story, and really tried to make the jokes work. Adam Sandler as Count Dracula really loves to bring the awkward jokes which really worked in this movie. I also believe that changing CeeLo Green to Keegan-Michael Key as Murray was an upgrade. I also enjoyed seeing Jonathan’s, voiced by Andy Samberg, parents, Mike and Linda, voiced by Nick Offerman and Megan Mullally, was hilarious to see Linda trying her best to relate with the monsters, but becomes offensive, and Mike let’s her know how bad and offensive it really was. It was a nice touch adding Mel Brooks voicing Count Dracula’s father, Vlad, to the last comedy scene. Vlad really brought out his old school self in a monster way, and that was cool to watch. The character that really stole the show was Count Dracula’s grandson, Dennis, voiced by Asher Blinkoff. He was so cute, and gave the movie some extra life.

The So So: The comedy was hot or miss. There were some parts that actually make me chuckle. Like the bluetooth joke made it stupidly funny for me to laugh, and Linda making fun of Europeans not wearing deodorant (you have to see it to understand). But some of the jokes were some complete misses, especially at the beginning of the movie. You can tell they made some jokes for adults, but they kind of missed the mark. The silly scenes will make children laugh, but when they go for one liners, the kids will be silent for sure.

What I Didn’t Like: The story was just as weak as the first story. It still shows how humans and monsters can’t mix, but this time around, they are trying to be tolerable to one another. Ad a half human, half monster kid into the mix, and the problems come in about what is best for the kid, or who he really is. In the movie, it really shows Count Dracula trying real hard to make his grandson a monster, while his daughter Mavis, voiced by Selena Gomez, thinks he is a human and should be treated as human. I believe that the story really needed more depth in their theme of tolerance, but  it kind of falls bland. It is unfortunate, cuz it could have been very thought provoking, even for kids. Speaking of kids, i believe some of the scenes can be too scary for children under seven years old. If I were a parent, I would think twice before bringing really young kids to watch this movie, cuz it can be too scary and inappropriate.

Overall: The movie was more or less the same as the first movie. i believe the story was weaker, but there are some moments a family can enjoy. I would wait until it gets to DVD in my personal opinion, and make it a family night!!! 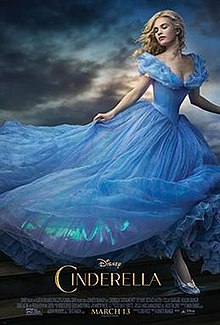 (Sidenote: Cinderella- This live action telling was pretty much the same thing as Disney’s animated version in the 50’s, only without the talking rats. The acting was good, most notably Cate Blanchett as Lady Tremaine and Lily James as Cinderella. However, if you see one Cinderella story, you see them all, and I didn’t see any differences to make this movie it’s own, except that it is live action. The CGI in this movie was very disappointingly subpar in my opinion, and they really rushed this story big time. One positive thing I will say is, for the new generation of kids, this can be a magical experience, but for people who know the movie well, get ready for the same old happily ever after story. Bottom line, it needed more dramatic themes in my opinion.
Rating: 3 Stars)