The Martian is an intelligent, interesting, and very good sci-fy survival movie, I was engaged from the beginning to the end, and wasn’t bored.

Another one of my Boston boys, and Ben Affleck’s partner in crime is Matt Damon. To me he is the epitome of a great actor. Ben Affleck can direct, produce, and write, but when it comes to acting, I put Matt Damon on top of my list when it comes to actors from Boston. It all really started for him with Good Will Hunting, which he wrote as well, but it wasn’t until the Bourne movie franchise that really accelerated his career. Loved him in one of my all time favorite movies, The Departed, even though his Boston accent was off and was weird that Leonardo Dicaprio had a better Boston accent than the man from Boston himself. I also enjoyed him in the Ocean’s Eleven movie franchise as well. He is a a cool, calm, and collected actor, and I enjoyed him in almost all his movies. Now he has done another sci-fy movie with the great Ridley Scott who knows a thing or two about sci-fy movies. I knew this movie will be legit, and it did deliver.

What I Liked: The story of this movie was phenomenal. The writers definitely did their homework when it comes to space exploration. Even though, it is a sci-fy movie about astronauts going to the planet Mars. They wrote it in a way like they it has really happened, even though in reality we haven’t sent humans to Mars yet. It was so detailed, and it wasn’t that detailed where the scientific aspects were boring.Instead, I was engaged throughout the whole movie, and actually learned a thing or two, about space exploration. I also enjoyed seeing the politics surrounding NASA, and dealing with the different issues that involves with NASA. I just loved seeing the arguments between Teddy Sanders, the head of NASA and played by Jeff Daniels, and Vincent Kapoor, NASA mission director played by Chiwetel Ejiofor, and seeing their different perspectives on how to save Mark Watney, played by Matt Damon, who is stuck in Mars. I like the media frenzy it started and seeing all the people handling it. The movie also had some very funny dialogue that really brought out the fun in this movie. Of course the star of the show was Matt Damon playing the astronaut stuck in Mars. It was a great survival story and how Mark Watney made it through with his intelligence. All the things he did and created to survive and recieve contact from Mars to NASA were fun and interesting to watch. were awesome, and I believe this is the best survival movie since Cast Away. Watney was made to be a likable character for all the audience to root for to survive. I just loved the scene when they were picking Watney up from Mars, and those minutes of suspense really made the outcome so much greater and fulfilling. The movie showed true teamwork and loyalty, throughout the other astronauts, even though the politics from NASA told them otherwise. Director Ridley Scott really put together a good movie for people to enjoy.

The So So: I thought the beginning of the movie to set up the big plot was really rushed, and the scenes were too dark to know what was going on, but as the movie progressed, it made up for it. Also, I wished they showed Watney struggle more with himself. I’m sure if you’re in that situation, you would experience doubt, depression, and maybe even suicide. Instead they show the character Watney as very positive and happy go lucky throughout his whole time alone in Mars. Nothing wrong with optimism, but for a movie that tries to be realistic, it needed to show some negative emotion.

What I Didn’t Like: There was nothing i really didn’t like. It was a well put together sci-fy survival movie with Ridley Scott at his finest. It’s good to see Ridley Scott going back to what he does best. I also believe that for some people, they may be bored with the slow points of the movie, but to me it flowed very well, but that is just me.

Overall: This is a well put together sci-fy survival movie for anyone to enjoy. it is a feel good movie, and maybe spark an interest for today’s youth to become astronauts, and maybe have an opportunity to really explore the planet Mars!!! 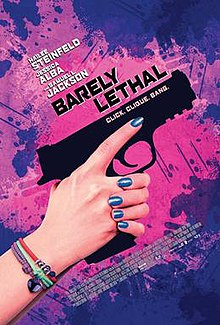 (Sidenote: Barely Lethal- This is a teen bopper movie starring Hailee Steinfeld as a former teen assassin who just wanted a regular teenage life and go to school. This movie really forced it with the high school teen drama cliches, but it is like they know it and don’t care. It was like the worst run school ever with some horrible teachers and principals. The action was kind of weak, though some of the fighting scenes were cool. You also get Samuel L. Jackson at his finest yelling a storm as the leader of training female teen assassins. But overall, it is a cliched corniness mess, that was somewhat entertaining.
Rating: 2.5 Stars)