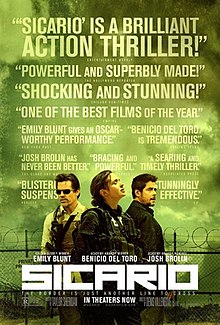 Sicario is a good and interesting movie even thought the plot can be confusing to follow, but in the end, it makes for an interesting and haunting payoff.

One of my favorite kind of movies are anything involving a dangerous group of people. Groups like gangs, street drug dealers, mafia, Yakuza, or the Cartel. Most movies and TV shows that are great involves one these types of people. It is interesting for me, and keeps me engaged, but as in most times with these groups in these movies or tv shows, they always ended up either incarcerated or dead. It is the perfect tragedy.Some of the great movies involving these kind of people are The Godfather 2, Scarface, and The Departed. It keeps me engaged, and it makes for a thrilling ride. With Sicario, after hearing the story involving The Cartel, I was immediately in. After hearing who is casted in this movie, it got me even more hyped. I knew this would be a good movie at the very least. The least was correct.

What I Like: The movie was crafted greatly by director Denis Villeneuve. All the tense scenes were very suspenseful, especially when you don’t know what is going on. The opening scene really set the tone with its surprises, then the scene with their first mission going to Mexico and back extracting a prisoner and the ensuing shoot out, to that scene in the tunnel where it was like a scene from Zero Dark Thirty, and loved the night vision scenes which brings in something completely different. Those scenes alone makes this movie watchable. The acting is on point, but with a cast of Emily Blunt, Josh Brolin, and Benicio Del Toro, that is expected. Who really stands out for me was Benicio Del Toro as Alejandro Gillick. He was sort of a mystery man through out the movie until it all unravelled in the end. The interrogation scene with the extracted prisoner was weird but intense to watch. Also that final scene where he kills the boss of The Cartel, Fausto Alarcon played by  Julio Cedillo, for revenge for killing his family, showing that maybe Alejandro is the true villain or not (depends how you look at it). Maybe, just maybe, he could get a Best Supporting Actor nod for this role, but I don’t think he will win it.

The So So: The story is really about a group of FBI agents recruiting agent Kate Macer,  played by Emily Blunt, to go on a secret ops team to take down the Cartel that is responsible for the wreckage in the beginning scene. During the whole movie, it seems the audience is like Macer, you have no idea what you are getting into, and have no idea what is going on, until little by little, it all unravels until the end. Personally for me, I hate being in the dark during the whole movie. I like to be somewhat clear on what is going on during the movie, and not waiting until it is all told. Maybe for some people the twist ending was greater for them, but for me, it made me grow impatient with all these secrets. All these secrets creates an interesting ending. In the end, the mission was just to get Alejandro to find out where is Alarcon and get his revenge. Macer was only recruited as insurance for them to get out of their jurisdiction to Mexico and get what they need. Everything out of protocol, and unethical. In the end Alejandro forced Macer to sign an agreement to say they did everything by the book, she refused at first, but was threatened with her life by Alejandro. I just wish in that tense scene in the end, Macer does kill Alejandro. It would make her character worth it, but in the end, she was really nothing. Almost a waste for the protagonist to be there. The ending was interesting when talking about police ethics, especially nowadays where police are under fire for their protocols. Really makes you question if they are really good cops, even in the FBI. I also liked the way director Villeneuve made the city of Juarez, Mexico so dark and haunting. Hearing gunshots and sirens in the background really made it into a scary town. But that leads me to what I didn’t like.

What I Didn’t Like: Yes it was cool how director Villeneuve made the Mexican city of Juarez chillingly bad. But that is all he showed about that city. Making it seem like the town is full of savages, and I like to believe there is a lot of good things from the city of Juarez. Right now this movie shows that Republican Presidential candidate Donald Trump calling Mexican immigrants drug dealers and rapists true, and it is completely not true and ignorant. Does that mean the city is perfect, no, but what country is perfect. Every city has their bad areas, but unfortunately, that is what Juarez was shown, and it is greatly disappointing.

Overall: The movie is thrilling, suspenseful, and interesting. You just have to be patient with the payoff ending. It may make or break you about this movie, but at least it will keep you engaged to enjoy this thrill ride of the unknown!!!