The Walk is a good and greatly directed and crafted film, it shows some true inspiration, and give you moments of chills that make this movie worthwhile.

Joseph Gordon-Levitt has been around in my lifetime since I was a kid. The first movie i saw with him is a personal favorite movie called Angels in the Outfield, and at a young age, showed some great acting. Then his role in the TV show 3rd Rock from the Sun really showed his comedic touch as a teenager. Now he has become a pretty respected actor with a big range of talent in acting. He is a good method actor that really immerses himself to the role he is playing. I have come to enjoy the movies he is in like Inception, Looper, Lincoln, and Premium Rush. I know he will at least be an Academy Award nominee in the near future. Sky is the limit for this bright young actor, and I’m willing to see what movie he comes out next. The movie The Walk was no exception. I knew right from the beginning of the trailer, that he has immersed himself again playing a French tight rope walker performer, and with him makes a movie about tight rope walking, very interesting. So I was immediately in. What i didn’t expect, is that how good this movie is actually is.

What I Like: The real big moment of this movie starts when they get to New York and get down to business to hang the wire between the World Trade Center buildings. Since what they were doing is illegal, let alone dangerous, it took a lot of careful planning which was very interesting to see. The best part was obviously seeing Phillippe Petit, played by Justin Gordon-Levitz (JGL), actually doing the walk. Director Robert Zemeckis really crafted a beauty in showing how crazy and dangerous this stunt is. In IMAX 3D you see how really high it was and it definitely put you on the edge of your seat. I get chills seeing how high it was, and I’m comfortably sitting down in the theater. It was a thrill to watch, and Zemeckis really created a great spectacle from the sky’s point of view. JGL playing Petit was fun to watch. He really immersed himself playing a Frenchmen. He has the accent and the language down, and really captured Petit’s passion for doing this stunt. Even though JGL doesn’t look like him at all, he did captured his essence of his personality. Him actually doing the tight rope walk was a plus for the method acting for JGL as well. I also enjoyed the chemistry between Petit and his mentor Papa Rudy, played by Ben Kingsley. He was a mentor to Petit even though they don’t see eye to eye. They may argue a lot, but you do see an amount of respect for each other in the process.

The So So: The movie did a good job of developing Petit’s character in the beginning of the movie on how he got started with tight rope walking and leading to his big stunt. However, they kind of did it in a documentary narration style which I didn’t like for this movie. To me, it was an easy way to develop the character better, and I thought they should’ve gone a more creative way. It was like watching the documentary Man on Wire, but with more visuals. At least it flowed well with the movie. It definitely had it’s weird moments, which shows how crazy Petit can get. None more crazier than when he is finding the arrow with the line which was misplaced somewhere, he was so desperate in finding the arrow that he even got naked and jumped up and down to try and feel the wire before he found it on the edge. It did happen in real life, so I can’t blame Hollywood for that, but it is still weird that that actually happened. The other part was when some random guy comes to the roof, sees Petit and his partner, and walks away. It did happen in real life, where Petit had no idea who that was, but it just got me curious of what that was all about. Was the guy about to commit suicide, and decided not to once seeing them? Did he end up calling the police? Why didn’t he say anything? That part bothered me after the movie, and really wasn’t necessary to put in the movie even though it happened in real life. During his walk, I liked when he went across and back, but once the cops came, this guy got too cocky with his stunts to a point where I was like, just get it over with. It’s not like the cops were going to leave, so he was just showing off to a point of my eyes rolling.

What I Didn’t Like: I was glad that Hollywood is starting to showcase the World Trade Center again after the 9/11 Terrorist Attacks where they pretty much banned from showcasing the towers. I believe it is time to show how great these towers were, which the movie did a good job on. However, I wished at the end they showcased Petit’s reaction to 9/11 Terrorist Attack, and show some sorrow as they were destroyed. It would’ve definitely give a better emotional punch to the movie, and a nice tribute for the 9/11 victims. That is something I would’ve done, and I believe would make the movie better and a better ending.

Overall: The movie is visually stunning, and recommend it to see it in IMAX 3D. You learn to love Petit and his passion in doing this stunt, and also appreciate the fine acting by JGL. It is a fun movie to watch!!! 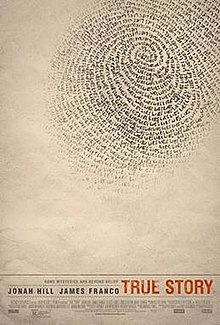 (Sidenote: True Story- This movie was a drama starring Jonah Hill and James Franco. I’m so used to seeing them in comedies, so seeing them in a drama was interesting. I thought both guys did a good acting job playing a struggling journalist Michael Finkel and death row prisoner Christian Longo. It started off interesting, but then it just dragged on to the big ending where I didn’t really care for. It’s too bad, cuz the story was interesting. At least I know these two comedic guys have a good range of acting chops.
Rating: 2.5 Stars)