Goosebumps does have its moments in action and comedy, but the cliches even for a kids movie is just too much to bare.

As a kid growing up, the Goosebumps series was the books you have to have to read, and enjoy. Honestly, it got me into reading a lot as a kid. Author R.L. Stine really made these books entertaining, and some can be really scary. I enjoyed the classics like Monster Blood, Night of the Living Dummy, Ghost Beach and Say Cheese and Die. They were a big part of my childhood. They made a TV series about the books which I found ok at best, but the books were the ones that made the cool kids cooler. When I heard there was a movie, I was a little reluctant, cuz I knew it would be for kids which storywise would lack substance. However, seeing the first trailer brought me some hope, and I knew i had to go check it out. I was hoping at the very least it would be nostalgic, and it was somewhat.

What i Like: just like the books, the movie had some good action and special effects and some funny comedy that actually made me laugh. All the dealings with the different monsters was fun to watch, and brought back memories for me when I use to read them. Add the comedy, i was entertained for the most part. One of the jokes that got me laughing was at the beginning when Zach, played by Dylan Minnete, was talking to his mom, Gale played by Amy Ryan, about moving to Madison, Delaware. He was sarcastically saying we could movie to Guantanamo Bay or North Korea, and then he said Detroit which gave me a big chuckle. Dylan Minnete playing Zach was pretty good character. I really enjoyed his sarcastic humor which gave him some comedic character. Jack Black playing R. L. Stine was fun to watch as well. Jack Black pretty much does his comedic best in playing the paranoid strange neighbor next door. We see the jack black that we have always come to love. Champ, played by Ryan Lee, added the slapstick humor in the movie that was amusing too, and his large beaver teeth really made him a goofball. Lastly, Odeya Rush plays Stine’s daughter, Hannah, and Zach’s love interest which added better chemistry with all the main characters and really was a nice touch, the twist that she is a ghost added a more emotional level to the story. There was a lot of characters i recognized like the Abominable Snowman of Pasadena, The Werewolf of Fever Swamp, the praying mantis from the book A Shocker on Shock Street, and a great scene with the lawn gnomes in Revenge of the Lawn Gnomes, but I’m really glad that they brought one of my favorite characters from the Goosebumps series, and that is Slappy the Dummy, voiced by Jack Black. I loved the fact that he was the one that started all the big troubles, and he is the one wanting revenge on Stine. His character as the main villain of the story was great and entertaining. it was also very nostalgic for me since it is one of my favorite stories and characters. Adding a cameo of the real R. L. Stine was a nice touch. Of course, what Goosebumps book, tv show or movie is without the twist ending in the end. The movie did just that, and really added the mythos of this great book series.

The So So: With some of the characters featured in this movie, there were many characters i didn’t recognize because they were from the later books which as a kid stopped reading them unfortunately. With that said, it does work well with the story. I know they couldn’t feature every character from the books, but I was disappointed that some of my favorite characters were not in it or had a very minor role. Characters like The Mummy, The Scarecrow, and The Phantom of the Auditorium (which seems fitting for this movie’s story for this character). One thing that I was really disappointed that wasn’t there was the Monster Blood. It was fitting to save the best for last, but they chose the Blob instead. Monster Blood was the classic character (or specimen) that really gave the Goosebumps series its breakthrough. I thought for sure they will have it in the movie, but was greatly disappointed.

What I Didn’t Like: The movie was a cliche galore even for a kids movie. Starting with the beginning of a mother and son moving to a new city, and the son doesn’t like it. They experience a recent tragedy, in this case Zach losing his father. They move in to a creepy or mean neighbor. The outcast makes friends with the main character. The creepy or mean neighbor join forces to save the city. The main character gets the girl, but loses her, but the stupid cliche of her coming back. So many cliches that it was too much to bare for me. For kids, it might be entertaining, but for adults (even the adult fans) it can get annoying. Unfortunately, it did affect this movie.

Overall: This movie would be great for the kids to watch, and for the fans of the series. It can get pretty nostalgic for some people as well. For the regular movie goers, this may be the so so cliched movie, and really doesn’t pack anything new. It is what it is, but it won’t disappoint the fans to greatly!!! 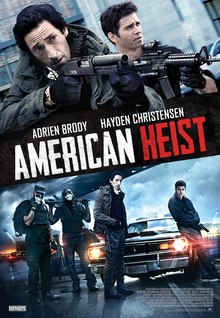 (Sidenote: American Heist- This heist movie features Hayden Christensen and Adrian Brody as brothers teaming up to rob a bank. It was greatly acted by both actors, especially Brody. The movie started very interesting, but once the bank heist started it all kind of fell apart which was disappointing. It also features singer Akon as a gangster which really was hilarious to see quite honestly. For a heist movie, where usually the pay off is the ending, it was probably the worst part of the movie.
Rating: 3 Stars)