I expected better from Spectre, but it is good enough, it is a proper send off for our current James bond in Daniel Craig.

Funny thing for me is that Daniel Craig’s portrayal of this iconic hero, James Bond really got me into this franchise. When growing up, it was Pierce Brosnan who portrayed the 007 agent, and after Goldeneye, his movies weren’t good to me, and I was disinterested with this franchise. When Casino Royale was getting promoted, I wasn’t remotely interested, but some people convinced me to watch, and I’m glad I did. Casino Royale, blew me away. The action was nonstop, especially the chase scene in the beginning of the movie (which has to be one of the best chase scenes in cinematic history). The movie made playing poker so tense and thrilling. Lastly, Daniel Craig as a tough and gritty Bond really gave the character more depth and relateable, and maybe that’s why I like him so much. When Quantum of Solace came the movie took a step back, but Skyfall brought it back to prominence. Many people say that Craig’s portrayal as Bond is not what Bond really is suppose to be, but I believe he will be remembered as one of the best (while I believe Brosnan will be forgetable). After watching some of the past movies, I believe the best bond is the original, Sean Connery. He set the tone for what Bond needs to be, and whoever comes after Craig, has some very big shoes to fill.

What I Like: As usual with these Bond films, the action is really intense. Probably my favorite scene is the beginning in the city of Mexico City during the Dia de los Muertos (Day of the Dead) festival. First off, director Sam Mendes really painted a great picture of not how great looking is the city, but he expressed their culture during a big event like the Dia de los Muertos. Seeing the parade and the skeleton costumes, and the dancing and what not really brought out a cool part of the Mexican culture. That first scene was crafted exceptionally. I loved how they took a book from the movie Birdman, and made the first ten minutes of the movie all nonstop and all in one motion. I love it when movies do that, cuz it shows their hard work to making a great scene. It was awesome to watch. Other action scenes were fun as well, like the car chase scene in Rome, and the boat chase in London were all fun to watch. There was a torture scene for Bond where he was strapped into a chair and getting drilled by needles to his face. That really made me a little skirmish, and probably more skirmish than the testicle busting scene in Casino Royale. Just imagine hearing the whizzing of a small needle about to penetrate to your face. (No thank you.) James Bond, played by Daniel Craig, took it like a champ, The cinematography of this movie was awesome as well. They really brought out the beauty of the cities like Mexico City, Rome, the mountains in Austria, and London. It really gave this movie some cultural depth that was great for our eyes to see. The opening animated intro was probably the best of the four movies. It was creepily good seeing the octopus tentacles representing the organization of Spectre, and seeing the eyes of the villain so dark and creepy really brought out a good effect. The song, “Writings on the Wall,” performed by Sam Smith was good, but Adele’s song, “Skyfall,” was the best one in the four movies. I also liked how they put together all of the movies into this one movie, and gave us some good background to the past movies to give us a better understanding of everything that happened.

The So So: I was kind of disappointed with the villain of this movie. I was very excited to hear that Christoph Waltz will be playing the villain, and I thought it was a perfect casting choice. Waltz is a great actor, especially when it comes to villains, and i knew he would nail the role. They have to bring it when it comes to the villain, cuz Javier Bardem, as villain Raoul Silva, was great in the movie Skyfall. (The best villain in these four movies.) The movie did a great job in hiding their big secret for Wlatz originally playing as head of Spectre, Franz Oberhauser, but ends up he is one of Bond’s classic villain in Ernst Stavro Blofeld. They introduced him as the villain very well, and shows how big and respected he is, but after that, he really was nothing. All it showed was his big plan to dominate the world, and torturing Bond, but in the end, he wasn’t that vicious. He keeps getting beat by Bond easily, and show how his character gets the scar to become that iconic bond villain. It was a good twist, but not as thrilling as I expected to be. Waltz was heavily underwritten for his talent, and that is very disappointing.

What I Didn’t Like: For the forth movie, it got a little cliched for their Bond standards. It was practically the same thing where Bond does a mission, goes against his orders, gets in trouble and suspended. Still disobeys orders to continue the mission, bangs his Bond girl, and a epic finish where he manages to escape alive. i wish they could’ve gone a different approach which would have made this movie a lot better. Lastly, this movie’s Bond girl, Dr. Madeleine Swann played by Lea Seydoux, was probably the worst one in these four movies. It felt her love interest to Bond felt forced and not genuine, and her flip flopping of some issues during the movies were kind of annoying. The chemistry wasn’t there with Craig, and that was disappointing.

Overall: The movie is good enough to watch, but don’t expect it to be as good as Casino Royale or Skyfall. With that said, I like to thank Daniel Craig for his time portraying James Bond, and thanks for bringing me in to this franchise. I hope the next Bond will be as good as you. There are rumors that the next Bond will be black, and i believe that it is time for a more diverse Bond for this franchise. It can give a different direction for this character that we haven’t seen yet, and I will be looking forward to that!!! 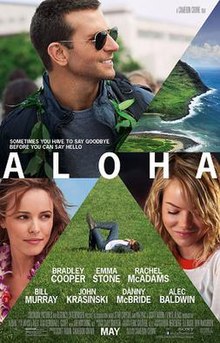 (Sidenote: Aloha- I lived in Hawaii for a year, and this movie really didn’t give the Hawaiian culture justice. Especially when they casted Emma Stone as Allison Ng, a proud Hawaiian and American soldier who loves to express her culture. Was it really that hard to cast a real Hawaiian for this role. I mean they did with the Hawaiian tribe, but for a mojor role in the movie, it was just sad to see. Bradley Cooper as Brian Gilcrest did his best for his role, and Alec Baldwin as General Dixon was hilarious. However, this movie had an identity crises as a romantic comedy and a political movie. They completely failed as a political movie where they can showcase the political tension between the Hawaiian natives and the US military, and they just made it like it really wasn’t that big of a deal, but showing Gilcrest’s past relationship issues is where they need to focus on. This movie just didn’t get their priorities straight, and really failed in that regard.
Rating: 2 Stars)