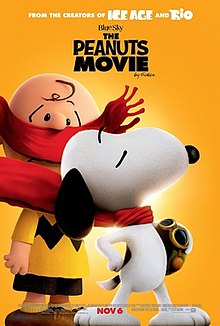 The Peanuts movie animation may be weak, but if you want good and fun storytelling this is the movie for all Peanuts fans to feel nostalgic for.

Let me start off by saying that I’m not a fan of The Peanuts. I know that is some blasphemous words to a lot of people, but it never peaked my interest. Even as a kid reading the comics section of the newspaper, I always skipped that The peanuts comic strip. With that said, I do respect as an icon in our pop culture history. I mean, who doesn’t know the characters of Charlie Brown, Lucy, Snoopy, and Woodstock. Also, when you hear the Peanuts song, you know what it is. Heck even the sad Christmas tree branch in a Charlie brown’s Christmas is iconic. Creator Charles M. Schulz really made a cartoon strip that is fun for the whole family. For that, my hats off to this iconic culture.

What I Like: Bottom line,  this movie really stays true to the mythos and iconic value that this story brings for more than 50 years. It’s like they haven’t skipped a beat even though a movie hasn’t been made for 30 years. For those who are fans of The Peanuts will definitely feel nostalgic, and enjoy this trip back down memory lane. The creators for this movie and director, Steve Martino, promises to stay true to the spirit of The Peanuts, and it did not fail. From all the personalities of each character, to iconic moments like Lucy, voiced by Hadley Belle Miller, tricking Charlie Brown, voiced by Noah Schnapp, in kicking a football, to Lucy’s advice stand, Snoopy, voice effects by the late Bill Melendez, sleeping on top of his dog house, Snoopy on the typewriter trying to write a story, and to the adults talking in trombone to the kids. (Who the trombone is being played by Trombone Shorty, a big plus in my book.) Everything had its classic moments for all fans to enjoy. The best part of this movie is that they actually made a good story. It really focuses on Charlie Brown with his same lack of self esteem for himself, but still motivating himself to do it. In everything he did was try to impress the new girl known as the Little Red-Haired Girl voiced by, Francesca Angelucci Capaldi, but even when things do go good for him, sometimes, he has to make sacrifices to do what is right, even if it affects your fame. To me, that is a great story for everybody to enjoy and understand, cuz it does pertain to life. That’s why that final conversation with Charlie Brown and the little Red-Haired Girl was very powerful to me. After everything Charlie Brown has done without success, she finds him for who he truly is. That is a fact of life we all need no matter how old we are. I also like how they pretty much censor the Little Red-Haired Girl’s face until the end. It keeps a mystery for us to look forward to. Also seeing Snoopy’s Red Barron story coming to life was a fun distraction as well.

The So So: One thing that kind of bugged me was the way this movie was animated. It is better than the past movies in the 60’s, but after all the animated movies now that come with a greatly designed animated punch, this was subpar to me in that standard. It almost bothered my eyes at the beginning, before I finally got use to it. With that said, I understand that they still wanted to keep that classic look. For nostalgic reasons, I can understand that, and in that regard it was executed perfectly. However, for me it was an eyesore.

What I Didn’t Like: For a classic movie that is making a remake or a comeback of some sorts, you always have to bring something very new unto the table. Something that us movie goers would be excited about that we are use to today’s movies. Something that shows, we are here as a classic, and we bringing something new to today’s audience. That is something I always look forward to in any remakes, comebacks, or even sequels for that matter. Unfortunately for The Peanuts Movie, it really didn’t bring any new. Instead, it was the same classic old tale. For a guy like me, who isn’t a fan, you need to show something new that can bring today’s audience in. (In the theater when watching this movie a 3 or 4 year old got bored and telling his grandam to go home.) So in that way, it was disappointing for me. It may be great for the long time fans, but for new age movie goers like me, i din’t get anything extra out of it, just the same old thing like watching Charlie Brown’s Christmas during the holidays.

Overall: For all the fans you will love, enjoy, and be nostalgic for this movie. For the not so big fans, like me, maybe not so much. That is why for me it is not the greatest movie ever. With that said, don’t let me be the Debbie Downer to the fans, go watch it and enjoy for yourselves. You won’t regret it!!! 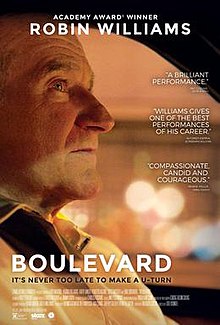 (Sidenote: Boulevard- This was Robin Williams official last movie before his death. So i have to see it. It stars Williams as Nolan Mack, a typical guy who has been living the typical married life and the same job. Until he meets a gay prostitute, played by Roberto Aguirre, where he realizes who he really is. An unhappy man who is married just for the sake of marriage, and moving on to become a gay person and breathing in a new life. The movie was interesting, but very boring in most aspects. What really brings this movie a little life is Robin Williams acting. It was pretty good in this movie, and may he rest in peace.
Rating: 2.5 Stars)