The Hunger Games: Mockingjay- Part 2 had some good  and thrilling action scenes, even though it was a little predictable and mute at some points, it is a satisfying ending to this franchise.

About a year ago, I was really critical and hard on The Hunger Games: Mockingjay- Part 1. The fact that the movie was too boring, and cash cow filler to bleed out some extra dollars from people. Also, I was disappointed with it because  The Hunger Games: Catching Fire was so good. I also said that this movie was possibly a calm before a storm, meaning something small for a big payoff. That is what gave me some audacity of hope for this franchise to end on a good note. As it finally came, it did, but not as big what I expected.

What I Like: This movie wasted no time in getting the war action started which is what I really wanted to see. Seeing the crew infiltrate the Capitol, and seeing how destructive this war was is a good spectacle to see. I liked how the Capitol is filled with booby traps called pods. Leaves a thrilling moment of not only will they fall for this trap, but what kind of trap is it. Whether it is flamethrowers, machine guns, or a pool of black tar, it was a little nostalgic because it reminds me of home Alone movie, but in a action movie kind of way. The other scene that really got me on the edge of my seat was when they were in the sewers, and were attacked by zombie like creature called mutts. I know some people will roll their eyes with Hollywood’s overuse of zombies nowadays, but this scene was executed decently. They made it creepy, and some of the action and fighting scenes was fun to watch. Seeing Finnick, played by Sam Claflin, die valiantly with these mutts was sad but heroic. Seeing this in 4D with all the water splashing on my face, almost made it lifelike. The acting was good, and it has gone a long way since the first movie. You get the best from Jennifer Lawrence playing the hero, Katniss Everdeen, but that is expected nowadays. Josh Hutcherson, playing Peeta Mellark has come a long way since the first movie, and has solidified his acting career for years to come. In the end, when the rebels won the war, and Katniss goes back to her home in District 12 with Peeta, you see a sense of peace for Katniss after all she been through. You get the sense of satisfaction that it’s all over, and she can live peacefully with her family. Seeing her with a family was a good touch that can tickle my soft spot of my emotion. It is satisfying in that regard.

The So So: Many parts really got to me but bothered me. One is that I like how they developed Peeta’s character after he was brainwashed, and ended up being the one Katniss chooses to be with, but there really was no reason for Peeta to join the front ranks of the rebel army. They didn’t really explain it, other than plot convenience. Seeing Katniss’ sister, Primrose played by Willow Shields, die in the explosion was very nerve wrecking. Reason is, the whole reason this series started was because of Katniss volunteering to save her sister from The Hunger Games. Now she ended up dyeing during the war was really emotionally upsetting. However, i wanted to see some strong emotion from Katniss because of her death. Seeing her with very strong emotion, which Lawrence is capable of doing, would make this a great impact for her. However, they didn’t really show any emotion from her. It did show anger, but not enough emotion. I was slightly disappointed because of that, cuz that could’ve made the movie that much better.

What I Didn’t Like: The movie had its slow points that dragged a little bit too long in my opinion. After The Hunger Games: Mockingjay- Part 1 which was one big slow point, I just wanted to see war and nothing less. The movie was also predictable. Mind you, I didn’t read the book, so the fact i found this predictable really doesn’t help the case. Two things I knew what was going to happen. One I knew Katniss and Peeta will end up together in the end. They try to make a love triangle with Gale, played by Liam Hemsworth, but since the first movie, I knew they would end up together. It was no surprise for me whatsoever, and The Hunger Games: Catching Fire really solidified my theory. The second thing I knew was that Katniss will kill the Rebels president Alma Coin, played by Julianne Moore. I knew it when after the Rebels took over, and she suggested having a Hunger Games for the losers of the war. The plan was so ridiculous to me that I knew something crazy will happen, and when Katniss was going to execute President Coriolanus Snow, played by Donald Sutherland, I knew she would fire the arrow to Coin. Not only was this predictable, but a little dissatisfying. You wanted to see President Snow die in the hands of Katniss, but instead when she kills Coin, and seeing a creepy satisfying laugh from President Snow before being killed by a mob, just didn’t do it for me. I wanted a better death for this guy, but ended up disappointed.

Overall: With everything you see in this franchise, the movie did give an emotional satisfaction in the end. As I said, seeing Katniss with Peeta and starting a family, gave you a sense of peace for her which is satisfying for you and the character. As for the franchise it was a good and interesting franchise which definitely peaked my interest. Their best movie was Catching Fire, and their worst is Mockingjay- Part 1. Even at it’s worst, it is ok, and that made it watchable for everybody. Good series, satisfying ending, what else do you need? Katniss Everdeen will be an iconic character for years to come!!! 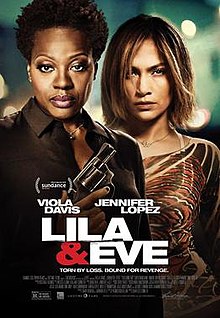 (Sidenote: Lila and Eve-This movie definitely gained my interest in the beginning. It was about a mom who lost her son to a senseless murder, and she teams up another mom who lost a child to find the people responsible. Pretty much becoming vigilantes. You get some great and expected acting from Viola Davis playing the mom, Lila Walcott. She teams up with Jennifer Lopez, playing Eve Rafael, who pretty much acts like Jennifer Lopez. It was interesting, but the plot twist really didn’t make sense for me whatsoever. You all can be the judge, but a bad plot twist can really affect the movie big time, and it did for this movie.
Rating: 2.5 Stars)