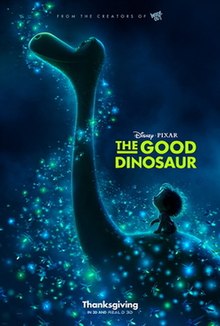 The Good Dinosaur is a well animated movie packed with emotion, but for a kids movie, it can be too typical of a story and pretty scary for some of the young kids.

So we get one year with no movies from Pixar in 2014, but now we get two in 2015. Shows that Pixar is working their tail off to make a good movie with great animation. They already started with Inside out which as of right now is the best movie of 2015 (that could change though), and now bringing in another unique movie this time about dinosaurs. If it is Pixar, I’m all in, and I know that these movies will be unique to say the least.

What I Like: The animation was on point, and that is expected with Pixar. This time around they made a nice country landscape with mountains, rivers, and forests. As for the dinosaurs, they were cute looking which kids could enjoy. The movie made the dinosaurs more of a Southwestern country setting, and even some had that kind of accent which made these dinosaurs very unique. What’s also strange but good about these dinosaurs is that they were either farmers or ranchers which added more depth to their characters. The story really surrounds on one dinosaur, an apatosaures named Arlo, voiced by Raymond Ochoa. Since he was born he was smaller than the average dinosaurs, and always is scared of something. What I really like that was unique is that the tyrannosauruses rexs (T-rex) were actually good dinosaurs. It always seemed that the T-rex are the villains in almost every movie about dinosaurs, but here they are good which is a breathe of fresh air for these species. I liked how the movie made them look vicious at first, but then were revealed good was a good touch for this movie. The movie had its funny moments too. My favorite part is when they were blowing on the holes in the ground, and popping out the groundhogs.

The So So: The movie had it’s share of cliches for a typical kids movie, but these cliches were actually the ones with the most emotional punch. For example, they did the cliche of Arlo’s father dying because of his fear, but it was a sad moment in this movie. Also the relationship with Arlo and the caveman kid named Spot, voiced by Jack Bright was like a typical kid and his dog type of relationship. Which in this case the dog was the human. It was emotional when they talked about family and who died in their family which was very symbolic. However, this relationship was cliched with Arlo having to save him, and somehow surviving a waterfall. Also when Spot meets his own species, the typical story of letting this person go with their own family was touching, but I’ve seen it before plenty of times.

What I Didn’t Like: The story was weak for Pixar’s standards. All it was is a dinosaur gets lost in the woods, and has to face his fears to get back home. In a way, it was a survival story involving a dinosaur. It wasn’t really that unique, and the whole play of dinosaurs living today, cuz the asteroid didn’t hit, really didn’t pertain to the story. Another thing that bothered me was for a kids movie, I thought some scenes were too scary or dark for them to enjoy. When I was a kid, the death of Mufasa in The Lion King took a toll on me, and I could imagine for some kids when Arlo’s dad, voiced by Jeffrey Wright, passed away. There were scenes involving scary beats with sharp teeth that can scare kids, and when I was at the theatre two kids were crying and had to be taken out. So it should have been more PG than G in that regard.

Overall: this movie may be in the middle of the pack for a Pixar movie, but it is still enjoyable to watch. Really nothing more, and nothing less, but you won’t be bored, that’s for sure!!!