Spotlight is an interesting story of life as an investigative journalist, though it may seem very slow and boring at times, it really draws out the big picture of a very harsh scandal.

When I was in college I did start out as a Print Journalism major. I wanted to see if I could become a sports writer, but before I went into my true calling in another major, I learned some skills about being a good journalists thanks to a very good professor, Dr. Stacey Spaulding. I have written for the college paper, The Columbia Journal, mainly in their sporting events, but some projects I had to dig deep to make some good stories which I won some awards from the college. So I know what it takes to be a good journalist, and it does take a lot of hard work and dedication. So when I heard about this movie called Spotlight, I was immediately in, especially when it is about my favorite newspaper, The Boston Globe. The great cast, and Oscar rumors are just icing on the cake.

What I Like: The movie really showed the life of a journalist. In this regard they are talking about the true story of journalists for The Boston Globe uncovering a big scandal of a history of Catholic Priests sexually abusing and molesting children, and how the Catholic church try to cover it up. The reporters on this story were called the Spotlight team, and they are investigative reporters trying to find a story that is classified until it is printed out. It showed how hard it is to get information, and taking leads to uncover the truth. Almost like they were police detectives, and finding out who is guilty. I thought the movie was greatly casted, most notably Michael Keaton as Walter “Robby” Robinson, the head of the Spotlight team, and how he interrogates people to get the truth out was fun to watch. The character I really enjoyed the most in watching was Mark Ruffalo, as Michael Rezendes. To me, he did all of the hard work in trying to find victims to talk about what happened, and trying to uncover the missing court documents about this scandal that is covered up. He had so many speed bumps in his way, but he managed to get over those humps to get the intel he needs to make a very great story. One of my favorite scenes is when Rezendes got proof about one of the priests abusing a child and it was covered up, and wanted to immediately report it, but Robinson wanted to wait because he believes that this is something bigger and wait until  they get more proof and sources. This lead to a very heated exchange, but can you blame either side, no, cuz they both had a valid point. Eventually, the story they did report turns into something even bigger not in Boston or America,but worldwide. The story ended up winning the Pulitzer Prize, and really painted the big picture of a religious organization who claims to be all about God and Jesus, but covering up this scandal to protect their name showed how corrupt a religious organization can be and how naive people will believe that it is ok. (I remember in high school when that news broke out, and how big of a deal it was since half of my family is Catholic. It shocked the world.) I also liked the rivalry between The Boston Globe and The Boston Herald that the movie showed. It showed respect for each other, but they do

The So So: I may be nitpicking, but nobody in this cast which is based in Boston try for a Boston accent. Especially when they say that all their reporters are from Boston. With that said, the acting was still pretty good and concrete, but still somebody had to try.

What I Didn’t Like: As a journalist the job can get boring or running around in circles, and I completely understand that cuz I experienced it. However, for this movie some scenes were like that as well. Some parts were so boring, I almost dozed off. I get it that it is reality, but for a movie it needs to be entertaining from beginning to end. Show the good parts, and leave the nooks and crannies of investigative journalists to the professionals. To me this was the difference between a good movie to a great movie.

Overall: This is a good and interesting movie for the most part, and definitely gives journalists its due of the hard work it takes to get a good story. To be honest, in past movies, they make journalists come of as jerks. When they show the great and intense scenes, they show it right. It will get Oscar buzz, but in my book, there are better movies that deserve the Best Picture nod, but then again, the Oscars and I don’t always agree!!! 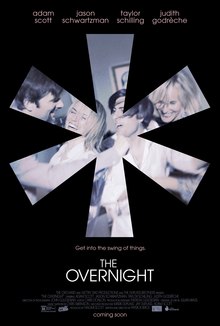 (Sidenote: The Overnight- This was weird movie to say the least, but it was amusing. It really was about a couple who just moved into a new neighborhood, and are trying to find another couple to befriend. They do, and what started out as an innocent dinner, turns out to be something more. It gets weirder and weirder as the movie progresses, but the jokes and one liners kept it interesting and funny. Some scenes may be too crude for my book, but you won’t be bored.
Rating: 3 Stars)