The Night Before (Sidenote: Love and Mercy) 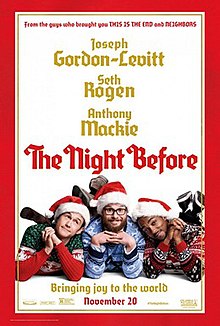 The Night Before started off slow, but picked up and had some funny moments, but in the end, it is a typical stoner movie!!!

One thing about comedies, there is always a group of people tagging along in almost every movie. Since I can remember, it started off with Adam Sandler, Rob Schnieder (and all his crazy cameos), David Spade, and occasionally Chris Rock, and Kevin James. Then later on it has been Ben Stiller, Will Ferrell, Owen Wilson, and Vince Vaughn. The chemistry is always there, and sometimes these group of comedians make some hilarious movies. Now, the group that has come in is with Seth Rogen, Jonah Hill, James Franco, and Craig Robinson. They have had made many funny movies so far, and we’ll see in the near future what future comedic groups will form in the future. Now with the latest group, they decided to make a Christmas comedy. So I had to see what they had in store for this movie, and in the end, make me laugh.

What I Like: The movie had its funny moments. Probably the most hilarious scene is seeing Seth Rogen’s character, Isaac Greenberg, on the many different drugs he ingested. His reaction and drug trips were definitely amusing to watch, and there is always something funny seeing people in that state whether it is in movies or real life. The movie stars a trio with Seth Rogen, Joseph Gordon-Levitt as Ethan Miller, and Anthony Mackie as Chris Roberts. These three did provide a comedic chemistry as three friends taking a tradition of partying on Christmas Eve ever since Ethan’s parents died 15 years ago. The one liners they give to each other were funny, and seeing them do crazy things in this movie was funny to watch. Add to the story mix that it will be their last time doing, due to more responsibilities as grown ups, this tradition really added some emotional impact. There were some funny cameos as well like James Franco as James, Tracy Morgan as the Narrator and Santa Claus, Miley Cyrus as herself, and Randall Park as Ethan’s boss. Probably the funniest and thought provoking cameo is Michael Shannon as drug dealer Mr. Green. Not only did he sell them drugs and act weird around them, but he did give them some thought provoking visions about their past, present, and future lives. It was a Christmas like story he provided as a Christmas miracle in a way.

The So So: They promoted a big party called The Nutcracker Ball which is supposedly the greatest party in the holiday season. Once they got into that party, it started off really cool. A secret entrance and they take a train down a trippy light tunnel. I thought this would be the craziest party ever. Once they got to the party, to me, it was over hyped. The only big thing is celebrities, including a Miley Cyrus performance which to me is whatever.Just a little underwhelming for something so big in this movie.

What I Didn’t like: This was a same old stoner movie. Nothing wrong with stoner movies, but they call seem the same. With goofy slap stick, and crude one liners. It didn’t really give anything new to this kind of comedy except the Christmas twist. So a lot of its comedic moments were whatever for me, but maybe funny for the stoners which I can understand in that regard. Especially in the beginning where it started off really slow for a comedy which maybe lost my focus a little.

Overall: The movie had its moments, but in the end you get the same old typical things you find in a comedy nowadays. It’s still a good enough stoner movie for people to pass the joint around!!! 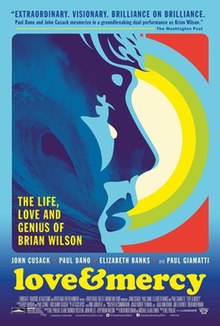 (Sidenote: Love and Mercy: This movie is about two different periods of life for Beach Boys singer Brian Wilson. It showed his early life where after a successful career creating new music but starting to develop post traumatic stress. For that period it was greatly acted by Paul Dano, who actually looked the part and acted tremendously. The second period is where Wilson, played by John Cusack, who acted well, but didn’t look like him, is being cared by an abusive psychiatrist, played by Paul Giamatti, and finds solace in a new women named Melinda, played by Elizabeth Banks who keeps him sane and start his later career. It is an interesting movie to see famous people dealing with their mental demons, but the movie can have their really slow and mute points. However, there are some interesting scenes that can make this movie worthwhile.
Rating: 3.5 Stars)