Secret in Their Eyes (Sidenote: Entourage) 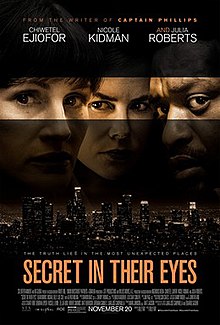 Secret in Their Eyes is an interesting crime mystery movie, but the ending was completely unsatisfying.

I probably said this before, but I always love a good mystery movie. A movie that keeps you guessing in who done it, or what is going to happen. The thrills that keep you on the edge of your seat that gets my heart pumping. Lastly, the twist that really should surprise you. (Like the Butler did it cliche.) There are many great mystery movies, too many to say, but regardless, they are always entertaining. For this movie, Secret in Their Eyes, is another type of this movie. It is based on the Oscar winner for Best Foreign Film from Argentina, which I never saw. So this story is completely new for me, and that can be good thing.

What I Like: The movie had a great cast starring Chiwetel Ejiofor as Detective Ray Kasten, Nicole Kidman as District Attorney, Claire Sloan, and Julia Roberts as Jessica Cobb. All three of them work together to figure out an unsolved murder of Jessica’s daughter, Caroline played by Zoe Graham. Their main suspect is a guy named Marzin, played by Joe Cole. I liked the chemistry between the three of them trying to solve this case. The beginning of this mystery story really kept my interest to see what it is going to happen, and it did keep me guessing on what will happen.   The movie showed some flashbacks before the murder that really developed their characters, and to the present that showed how it affected them. Director Billy Ray, really created a dark tone for this movie which really stands out in a good way. It showed their true dark emotions by its dark setting, and really set a good tone for the movie.

The So So: The movie showed the deep chemistry between Ray and Claire. It was like a forbidden love between them because they were both with somebody. Even after 13 years, they still have a deep attraction for each other even though Claire is married now. The movie really concentrated on their relationship the most. Honestly, I thought this was the wrong relationship they concentrated on. They should’ve concentrated on the relationship between Ray and Jess. A distraught mother whose daughter was murdered, and a friend vowing to give her daughter justice. I believe that chemistry can really bring out the emotion in this movie, and probably make the ending with more sense to their payoff twist. Instead, they concentrated on their forbidden love which to me got very redundant, and nothing to do with the main story.

What I Didn’t Like: Every mystery movie has some sort of twist ending, and this movie was no different. However, this twist ending was not only unsatisfying, but it was also confusing, and really dumb. Pretty much the twist was the guy whom they thought was Marzin wasn’t really him, because Jessica confessed to Ray and Claire that she killed him 12 years back. Then the movie had a double twist where it ends up that Claire had the real Marzin imprisoned in her own secluded farm house. When Ray found out the truth, the payoff of this twist just took a confusing turn where they finally decided to kill him after all these years. I was confused why Ray was digging a whole, originally I thought he will find a dead body, but as the gun shot was heard. I guess they were just going to bury him, and that’s that. What? After everything that happened, they were just going to let it all go like it’s ok. They also didn’t show what Claire will do after hearing Jessica’s confession. The twist probably had some good intention, but it really threw me off in a bad way, and in the end, I felt unsatisfied with this movie.

Overall: The movie started off with a lot of potential, but the ending really ruined their potential M. Night Shyalaman style. It’s a shame cuz the main actors really did well in their roles, but the story just didn’t do this movie justice. Almost like ordering an expensive steak at a restaurant, but it is smaller than a CD from FYE!!!

(Sidenote: Entourage- I never seen the show because I never had HBO, so this was all new to me. Maybe that is why I didn’t really like this movie. To me it was just a big episode with a lot of partying,sex, and arguing.The story was too lame to begin with, and it was stretched out too much. The funny thing is that they had a lot of cameos that like to drop F-bombs which was amusing, but in the end, I have to ask, why should I care about these guys?
Rating: 2.5 Stars)