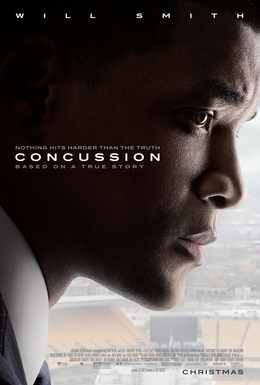 Concussion is a good drama, with great acting by Will Smith, really makes you wonder how suspect the NFL is.

Other than movies, I am a big sports fan. Since I’m from Boston, I enjoy all the Boston teams, especially the Celtics. I also teach Physical Education and coach a basketball team. Sports is a passion of mine. So I do enjoy a good sports movie. Some of my favorites are Remember the Titans, the Rocky franchise, Hoosiers, Cool Runnings, and Angels in the Outfield. I also enjoyed some sports movies that have a different angle like Moneyball which is a sports movie about a general manager in baseball. When I saw the trailer for Concussion, and see how Will Smith new method of dramatic acting, I knew I had to watch it. Dealing with an issue that is relevant in not just football, but in all sports. I know the NFL is getting a bad rap about the issue of concussions with their players, but I was intrigued with how this got started. It was dramatic to say the least.

What I Like: Let me start of with Will Smith’s acting. As, Dr. Bennett Omalu, a Nigerian who immigrated to the US, and became a Doctor doing autopsies, he did a pretty good job. I thought his accent was good, and comprehensible. He still had his dramatic touch which Will Smith does great. Every tense scene you practically see tears out of his eyes. That scene where he says, “Tell the truth. Tell the truth,” was very intense. I may hear an Oscar nod in his favor. He had great chemistry with Alex Baldwin, playing Dr. Julian Bailes. A former doctor for the Pittsburgh Steelers, who wanted to help Bennet expose the NFL in disregarding players with serious head traumas. I also enjoyed his chemistry with Albert Brooks playing Dr. Cyril Wecht, the county’s coroner who always looked out for Bennet, and always remained positive when all odds are against him. I also enjoyed seeing some actors playing former NFL players suffering from Chronic Traumatic Encephalopathy. It showed how serious this condition is and why playing football can make you prone to suffer, and actually comitt suicide. This movie really showed how suspect and corrupt the NFL. All for the business they disregard the serious condition of head traumas, or taking it with a grain of salt. Then when it does get serious they try to bring the Doctors down with death threats, fake charges, and bad publicity. It got to a point where it really affected Bennet and his family that he decided to give up, and move on. I liked how they exposed Roger Goodell, played by Luke Wilson, and how he corruptly handled the situation. (Not a good year for Goodell, and I love it.) I also liked seeing the big hits in the NFL highlights they show, showing how unhealthy this sport can be, and yet that’s why people pay and watch it.

The So So: The one acting chemistry that was a little shaky was between Will Smith and the beautiful Gugu Mbatha-Raw as Prema Mutiso. Gugu acted well, but the chemistry with Will at the beginning of the movie seemed very awkward and real. Them going to a club never looked so awkward, and that’s coming from Will Smith who is a great dancer. Eventually, they settled in, and at the end of the movie their chemistry was a lot better. So maybe it was suppose to be that way. I would’ve done it in a better way, to make it look less awkward.

What I Didn’t Like: Director Peter Landesman really tried to add his own flare to the movie, but it just didn’t come out right. Those real close ups on the actors faces to a point it cuts their heads didn’t do it for me. I also had a problem with the transitions in this movie. Supposedly, it started in 2002, but next thing you know Bennet is married to Prema and later on they’re having a child. When I thought there is lineage problems with their NFL games, but realized they are in the future. It got me really confused. The only other time they give us time specifics was when they moved to California, and it was 3 years later. The movie needed better transitions which is key for good editing in a movie.

Overall: The movie is a good dramatic movie involving the NFL. As many people praises the sport, this movie shows the dangers and corrupt mess the NFL gives. Will Smith’s acting in this movie shows he hasn’t lost his dramatic touch. When you’re ready for a good and informative drama involving football, this is a good one to watch!!!