The Revenant is a beautifully filmed and directed movie with some of the most intense acting from Leonardo Dicaprio, in the second half the movie may have dragged a little bit, but it is a good watch and see Inarritu at his finest in film making.

Leonardo Dicaprio now has to be one of my favorite actors in Hollywood right now. He has come a long way since I can remember him. The first movie I remember was the big hit Titanic which he acted good, and was a real heart throb. As he progressed he became more and more of an intense method actor. He immerses himself in the role, and does what it takes to make the role as real as possible. He really becomes the character, and i appreciate that from him. Some of his acting roles that really impressed me was Blood Diamond where he played a Zimbabwean diamond hunter, The Departed where he played the undercover Boston cop very well (and did a way better Boston accent than Boston native Matt Damon), Django Unchained where he played an unethical Southern slave owner (and literally cut his hand in a scene and kept going), and The Wolf of Wall Street where he was funny and intense as a crooked stock broker. I’m surprised he hasn’t won an Oscar yet, but I know he will get his due because he puts in a lot of hard work in everything that he does. I believe teaming up with one of the hardest directors to work with, Alejandro G. Inarritu, can really boost up his chances. As for Inarritu, I loved Birdman with his unique directing style, and want to see what more he has in his repertoire of film making. Having these two work together could mean gold, and they found gold.

What I Like: Let me start with the directing of Alejandro G. Inarritu. He created another beauty. After he won a lot of Oscars for Birdman, he could’ve slacked off, but no, he created another masterpiece. The cinematography in this movie was top notch, and great for your viewing pleasure eyes. You see the beauty of the landscapes of the snowy wilderness in this movie, and how harsh a winter in the deep Midwest can be. Inarritu loves to film very long scenes where everything must be perfect in one long shot. He did that a lot for this movie, and it was great. The beginning scene where the hunters were being attacked by Natives was a very fun scene to watch, and very intese because you don’t know where the arrows come from and next thing you know a guy gets hit with it. That’s what i like about Inarritu’s film making, and I understand and appreciate the hard work he puts into his films. He just might win the Oscar for Best Director once twice in a row, and he deserves it. He has to be one of the most creative directors out there in the game right now. Let’s movie on to Leonardo Dicaprio’s acting as hunter Hugh Glass. They filmed in the coldest area in Canada and Argentina, and you can see the actors look like they are actually freezing. Especially for Dicaprio, who sometimes have to be without a coat in the middle of the snow, or jump into some freezing cold water in the winter time, or be naked covering yourself in a dead horse. You see that he was suffering cold throughout the whole movie. Also that scene where he gets attacked by a bear was very intense. I’m not sure if the bear was real or not, but you can feel the fear that Glass has to go through while being attacked, and managed to kill the bear, but not before getting severely injured. It’s a good lesson learner on what to do if a bear did try to attack you in real life (I won’t put myself in that situation, but hats off to the people that do and survive). Most of the movie Dicaprio doesn’t talk, but you see it in his eyes how intense he was in his role. The look he got when his son got killed, or trying so hard not to blink which means confirming for him to be killed, and even enacting revenge on the guy who killed his son and left him for dead was intense even though he didn’t say much. With what Dicaprio has to go through for this movie role, he has to win this Oscar. (If he doesn’t not only will this be a travesty, but I believe Dicaprio would actually cut off his own hand in a movie to win that elusive Oscar, I hope I’m dead wrong, but I believe that could happen.) Pretty much the villain in this movie was Tom Hardy playing John Fitzgerald. He was a fellow hunter, but when they were attacked by the Natives, you automatically see how selfish he was in trying to survive. Where he really disgusted me was he promised to stay and take care of Glass until he dies for a good amount of money, but instead he leaves him buried alive, and kills Glass’ son when he knew what he was going to do. He lies his way through until Glass does survive, and enacted revenge on him. His death was justice in this movie. Hardy really had a great country accent where he sounded a lot like Jeff Bridges. I was impressed with how good of an accent from a British man was for this movie. At first the movie showed how natives can become savages and kill many hunters, but as the movie progressed, they showed why they attacking people. They had a good reason to do it, because they were looking for their Chief’s daughter who was kidnapped by some settlers, and were violating her. So the movie makes you second guess who are the real savages. A nice subplot to think about. The movie was mainly a survival movie. The way Glass survived a bear attack, endure freezing cold temperatures, dodging Native attacks, and even survive going off a cliff with a horse. This was the ultimate survival story that was against all odds.

The So So: There was nothing in between for this movie, but there was something I didn’t like.

What I Didn’t Like: This movie was long, and at times you feel the longevity of this movie. There were many scenes where they dragged out for too long where I’m telling myself, “Ok, let’s get on with it.” After you see Glass surviving against all odds, all you really want to see was him getting his revenge on Fitzgerald. Instead you see a lot of flashbacks of him and his relationship with his son’s mother who was killed during an attack. The scenes were good for character development, but it got to a point where they did it too much. it made the movie drag on for too long. Other than that, it is still a good watch, but be prepared to be there for a while.

Overall: This movie is an epic spectacle to watch, and I believe this will win some Oscars.I believe it will win Best Cinematography. I believe Inarritu will get the Best Director award twice in a row, I believe Dicaprio will finally get his long overdue Oscar, and I believe (though haven’t seen all the films yet) it will win Best Picture. It is a fun and intense movie, where the hard work from everybody involved in this movie pays off big time!!! 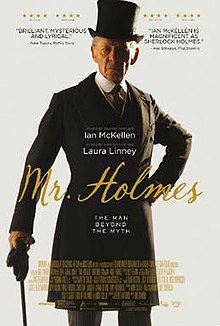 (Sidenote: Mr. Holmes- The premise of this movie was intriguing for me, but it greatly disappointed me. You do get Ian Mckellen playing an old and retired Sherlock Holmes, acting very good which you expect from McKellen, but the rest of the movie was very boring. You see an old guy struggling with amnesia in writing about his last case which he doesn’t remember and tries everything to remember. He befriends his housekeeper’s son, and he helps him remember little by little. When the pay off comes with what happened in his final case, i was already in the not caring mode to know what really happened. There is something about British drama’s that really don’t do it for me. They always seem like a boring mess.
Rating: 2 Stars)