The Big Short is interesting, witty, well put together, and entertaining even though all this business talk can be extremely exhausting, but it does prove it’s point on how corrupt the corporation bank system is.

There are movies that like to take on a political approach, and show the audience how good or corrupt a person, group, or system can really be. So the movies main approach is to expose the goodness or corruption with a good film story. As long as the movie shows and proves it’s point and gets people talking, it has succeeded. Usually these movies do deal with politics and how dirty it can get. One example is the Ides of March, and that movie really brought to my attention how dirty the politics game can be. Another one that comes to mind is Casino Jack, and shows the world what Lobbyists can do, and how much power they have in the government system. Wall Street, Assault on Wall Street, and The Wolf of Wall Street show how corrupt the stock market business, and can really screw you over. Though not political, but most recently the movie Concussion exposes how a big sport corporation in the NFL really disregards the players safety and health. These movies really got me thinking how corrupt these corporations and people can be, and for the most part, get away with it. I personally enjoy these types of movies, and done right, it can really make an impact on today’s audience. With this movie, The Big Short, about the housing bankers and how their corruptness led to the economic crisis in 2008, I knew this movie would be interesting. With their big cast, I knew it would be entertaining to say the least. I was partially right.

What I Like: I was very impressed with the way Adam McKay directed this movie. He is mainly known for directing comedies with Will Ferrell, and now he took on a somewhat more serious film. He put together a pretty cool political film, and spun it his own way to make it interesting, witty, and entertaining. The editing in this film was top notch. Each scene goes into a crazy scene mode to keep you engaged and entertained. I really enjoyed the cameos from celebrities like Margot Robbie, Anthony Bourdain, and Selena Gomez breaking down a banking term, and explain it in Lehman’s term. McKay really brought out the characters personality and quirkiness with these good actors that really added some personality depth to this film. The movie pretty much breaks it down to three stories all relating to the same thing, and that is predicting the bank housing system will implode and pretty much make a bet, or short, to make a big profit out of it. One story involves two investors, Charlie Geller and Jaime Shipley played by John Magaro and Finn Wittrock. These two actors had great chemistry, and they predicted the bank housing crisis and decided to make a profit out of it. They needed help by a retired bank lender, Ben Rickert played by Brad Pitt, to loan some money. Not only did they win big, but they question their values on how people will get screwed over by these banks. They try to expose them, but weren’t that successful. The second story involves a fund manager named Michael Burry, played by Christian Bale, who is one of the first to see this coming, and decided to go all in to make this short. A lot of people did not believe him and thought he was crazy, but he kept on and was eventually right. Bale did a great job playing a crazy guy who knows what he is doing in the long run, but is never really taken seriously. The last story, which to me, was the most intriguing story, involves another fund manager named Mark Baum, played by Steve Carell, who really tries to work in doing what is right for people, and exposing all the bad things that banks do to get their profit, even if it is unethical. Mark gets a big tip from a trader named Jared Vennett, played by Ryan Gosling, about the bank housing market imploding, and wants to use their business to invest in a big short. They eventually agreed, but with the stipulation that they expose why it is the bank’s fault when it does happen, and how unethical it is. Their story was so interesting, and the big part of the movies purpose to show how the banking corporation really screwed people over for their own benefit. Mark who can be a real jerk in exposing these banks, really takes a toll on himself when he finds out that the banks don’t really care about the people they serve, and in the end, when something goes wrong, they will get bailed out. When it was all said and done, that is exactly what happened, they got bailed out, and using their same methods for their business to continue. (Elizabeth Warren really needs to expose these crooks, and bring them to justice.) The story was interesting, and with these actors, they were funny and entertaining in their roles. The movie did prove it’s points in exposing these banks, and how corrupt they are.

The So So: There was nothing in between for this movie, but let’s move on.

What I Didn’t Like: There is one part in this movie that really affected me while watching this movie. Though the writing is good in dialogue between characters, most of the movie was just talking in their business jargon. Almost all the movie, it was about business of the short, and the bank housing corporations. They really try to explain everything, and I do enjoy the cameo’s explaining things in Lehman’s terms. However, I’m not a business major and just got really exhausted on all this terms and business talk. It was almost I needed a lawyer to explain me the scenes that just happened. Occasionally, I drifted in and out of some scenes, because I just lost focus on what it is going on. In movies, you need a good balance in explaining things, and keep the movie entertaining. The one thing I believe this movie failed in.

Overall: Once you get through all that business talk that can be very exhausting, it is a good movie that really exposes the corruptness of the banks that I hope can inspire the regular people to vote for political candidates who are against these corporations and put them into justice. The actors really played their roles well in making this movie witty and entertaining, while keeping their sense of humility within them. In the end, this movie can make a big impact if watched right!!! 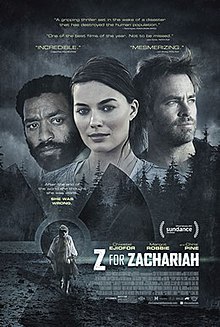 (Sidenote: Z for Zachariah- This movie is about the aftermath of a nuclear apocalypse, and about one survivor, Ann played by Margot Robbie, who makes a good living in farming for herself, but is very lonely. Until another person named John, played by Chiwetel Ejiofor, comes across and decided to stay and help her, and upgrade her way of living to make things easier. Once they grow an attraction for each other, another person comes along, Caleb played by Chris Pine, and really creates a love triangle that creates animosity with John. In the end, this movie had an interesting premise with some good actors, but was just straight boring. It was almost like a romance straight out of the Twilight series. It does challenge you with human ethics, but it wasn’t that entertaining. That’s too bad, cuz this movie had a lot of potential.
Rating: 2.5 Stars)