The Hateful Eight (Sidenote: Some Kind of Beautiful) 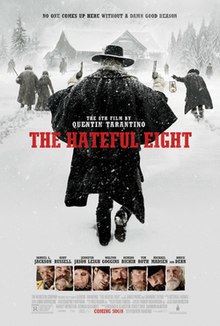 The Hateful Eight isn’t one of Tarantino’s best mainly because of a slow start, but once the movie starts unraveling, you get the witty dialogue and crazy violence that is very Tarantinoish.

My man Quentin Tarantino is one of my favorite directors in film right now. He has a big knack of the strange and weirdness, and adding some of the best dialogue in movies. I can quote many lines from one of his best movies, Pulp Fiction. His violence can get uneasy, but very tasteful. Each if his movies always has that one weird and violent moment that everybody talks about. Tarantino is a strange guy, and that’s why his movie succeeds. He puts his strangeness into the movies which brings out some hilarious moments. Sometimes some moments can make you squeamish and turn away, but people will still talk about it. he also loves the old school setting, to a point where he films with old school cameras to add authenticity. Tarantino is unique director, and why he will always be remembered.  Some of my favorite movies he has done, other than Pulp Fiction, are Inglorious Bastards, Django Unchained, and Kill Bill Vol. 1. When he makes a movie, I am there, so naturally I was down for The Hateful Eight. The movie had a great cast, and I knew we were in for a special treat, and that is somewhat what you got in  this movie.

What I Like: This movie was really all about the acting. Most notably four characters really stood out. Naturally Samuel L. Jackson stood out as Major Marquis Warren. Since the movie is set after The Civil War, he had a sense of pride being a working black person, but still receives racial backlash. He was the guy that really took control when the movie hits it climax, and was hilariously entertaining as we usually get with Samuel L. Jackson. The other character that was interesting was Sheriff Chris Mannix, played by Walter Goggins. He is a Southerner who doesn’t like where the country is heading, and gets into heated arguments with people, and backs down when it escalates too quickly. However, in the end you see where his loyalty remains, and was actually very smart in the end. Goggins acted well as we expected, but does bring another kind of presence when he backs up in what he believes in. He knows when to shut up, which is probably why he survived in the end. The person who really took the show was Kurt Russell as bounty hunter, John Ruth. He is a respected bounty hunter who always delivers his prisoners alive. He has a great charisma about himself, and was hilarious in his interactions with other people. He made the first half of the movie watchable with his crazy conversations. Lastly, the other character the really made the movie was Jennifer Jason Leigh as the prisoner, Daisy Domergue. She was being taken into custody by Ruth, and pretty much was getting brutally abused during their journey. No matter how much she was getting abused or ridiculed, she was always smiling like she had something up her sleeve. In this movie, once Ruth dies by drinking poisoned coffee, the movie took a turn for the extreme moments and plot twists. Seeing Ruth die by throwing up blood got me uneasy, especially when he threw up on Domergue, and for the rest of the movie she was covered in blood like Carrie. It was gross, but very Tarantinoish. Seeing guys getting their heads blown off very comically really added to the kind of uniqueness Tarantino try to do with a somewhat Western fell to it. The plot twist really made the story of the movie makes sense where all the guys that were in the Inn came in before Ruth and Warren came in. They were lead by Jody Domergue, played by Channing Tatum, who is the brother of Daisy, and devised a plan to free her from Ruth’s custody. They go to the Inn, kill off everybody, and make it believe they were residence to make it believable for Ruth and Warren. Warren knew they was something suspicious going on, but decided to go with it until things go wrong. In the end, the bad guys were all killed off in a Hamlet like fashion, leaving Warren and Mannix bleeding to death, not knowing if they would survive.

The So So: The story’s premise was really a little bland. Eight people staying at a Inn to take shelter for a blizzard coming in. From the beginning when the characters were getting developed, you didn’t know where this movie was going. You knew it has something to do with Domergue as prisoner, but what was their point to this movie. When the movie hit it’s climax, it all made sense, and you get the Tarantinoish type of movie. However, the movie really started off slow which is a rarity for a Tarantino movie. Yes, it had funny dialogue, but you have no sense of a point where the movie is going, and you can drift out of it real quick. The movie was almost three hours, and you felt the the time when you’re watching it. Luckily the climax and plot twist made it respectable.

What I Didn’t Like: Tarantino almost cancelled this movie when his script was leaked on the Internet. I was hoping he would reconsider, which he did, because I was still intrigued by his unique stories in his film. However, that leaked script probably affected his elements of surprise in his movies. That’s why I plead to those hackers to stop with the leaking of anything, cuz you do ruin the art of movie watching, and it doesn’t benefit anybody. Maybe Tarantino should’ve cancelled it to prove a big point.

Overall: This was probably Tarantino’s weakest movie since Death Proof, but it doesn’t mean his track record of films are not good at the very least. It may start off slow, but the payoff is still very good to watch, and be entertained. I hope Tarantino brings another classic in the future to really bring his legacy to the top. He deserves it by his hard work, and uniqueness. Why his movies are special!!!

(Sidenote: Some Kind of Beautiful- This movie is a romantic comedy that stars Pierce Brosnan as a womanizing English professor. (What else is new for Brosnan?) This romantic comedy you can add to the list of stupid. Really the only thing that made this movie watchable was seeing the beautiful Salma Hayek, and the beautiful Jessica Alba act. (For Jessica Alba, sort of act.) These two girls were suppose to play sisters, but one has an American accent, and the other has a Latino accent. This just the tip of the iceberg of this movie not making any sense. At least Salma Hayek is sexy in this movie, in case you guys get suckered into this mess.
Rating: 2.5 Stars)