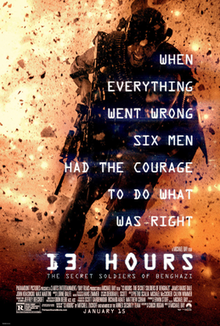 13 Hours: The Secret Soldiers of Benghazi has some very good war battle scenes, but at times, it can be too confusing to know what is going on, but the payoff would make this movie decent at best!!!

I can talk about Michael Bay for once. You either love him or hate him, but I am a fan of his craft to make a great action movie. As he says, he makes the movies awesome, and I believe that is worth something. It all started with Bad boys II when I really started to notice how great his action scenes are. When he made cars fly through the air, I was in awe. granted that I was a teenager, and I am an action junkie, it was pretty awesome with all the explosions and what not. Bay is unique, and he knows how to create. He did make a good Transformers series, but now I believe he is stuck doing unnecessary sequels which is really affecting this franchise. If you love action, you have to respect what Bay does, cuz he can make any scene into action eye candy. Now if you’re talking about story and character development, different story. I don’t blame him in that regard, but maybe he can force the comedy too much, especially in Transformers: Revenge of the Fallen. Regardless, he has made memorable movies for me mainly because of the action like the Bad Boys franchise which I love so much, Transformers, Pearl Harbor, and even Armageddon. I do wish that he takes on better movies, but maybe 13 Hours: The Secret Soldiers of Benghazi could be that difference maker. It is something different for him, and maybe he can branch into some new ground in his film making. At least the movie was decent enough, so maybe it is a step to the right direction.

What I Like: When it comes to pure war action, this movie had it. With an event that happened pretty recently, I liked how Michael Bay really created scenes of what really went down in the city of Benghazi. I remember the story hitting the news, but unfortunately, all I hear was nothing but political scandals (or made up accusations by those darn Republicans). So it was good to see how this battle epic went down. There were scenes where it was really thrilling, cuz there was an unknown of what is going to happen. Granted that we did know what will happen through history, but before and during the moment, you just don’t know what will happen, and who are the people you can trust. It was violent, but not brutally violent. Some scenes dealing with injured soldiers will make squirm, but for the most part, it was a good battle movie. The movie really centered around six soldiers who are at Benghazi as security people who are there to keep CIA operatives, and the US Ambassador of Libya, Chris Stevens played by Matt Letscher. Two soldiers really come to mind in this movie one was Kris “Tanto” Paronto, played by Pablo Schreiber. He provided a lot of the comic relief in that movie. His very sarcastic comments really had me laughing, and lighten the moment during a tumultuous time. The other soldier which the movie really develops is Jack Da Silve, played by John Krasinski. I never seen Krasinski act in a serious action movie, so I was intrigued in how he would do, and he was perfectly fine. He made himself as a soldier believable, and made me sit back and enjoy the movie. His character as Da Silva shows doubts between hs work and his family, and whether he can balance them out. However, once the attack went down, all he showed was true bravery and leadership. You actually hope this character would pull through so he can be back with his family which he realized, in the end, that’s what matters most. Bay really created how bad things were in Libya, especially in Benghazi, with all the political turmoil, but he also showed the beauty of the city (even though it wasn’t filmed in Benghazi, but he tried to do his best). Probably the coolest scene was when the Ambassador was attacked, the six soldiers took matters into their own hands and defy orders to try to save him. Shows what true patriot soldiers are all about, and that is what makes this movie decent.

The So So: With a movie directed by Bay, you do get what is now called Bayisms in scenes from this movie. Like the random explosions, the slow motions, the bright scenes, and he even took a page from his old book of Pearl Harbor, and show a mortar missile slowly going up in the air, and hitting it’s target. For me, I don’t mind it too much, but for some people, they would hate it. i thought for the most part it was appropriate for this movie. The only thing that bothered me was the excessive use of camera shaking which really wasn’t that necessary. Other than that, Bay did create a decent battle scene.

What I Didn’t Like: I was kind of disappointed when they didn’t show much of the political undertones that this story really overhyped when it happened in real life. Only thing they show is the dispute between army commanders, and why it took long for help. Even then, it was very minor. The movie was really all about the battle. Since it was a pure battle, there were times I just didn’t know what was going on. The lack of communication in the middle of the movie in trying to save the Ambassador really kept me guessing. Once it all came together, then I can really enjoy the rest of the movie. But, I hate being confused.

Overall: Bay created a decent battle movie, and really opened a picture of what happened in Benghazi. It is a straight up war movie, and if you’re looking for a political thriller, it is not there. However, if you love action, then you will enjoy this movie. I just hope Bay gets out of the Transformers franchise, and create other movies (like Bad Boys 3). That way I could see his craft in something unique, other than the same old thing!!! 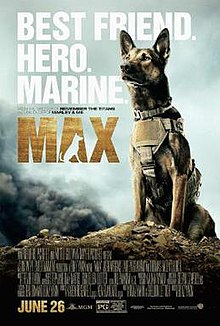 (Sidenote: Max- This movie was really disappointing for me. I expected it to be a decent family movie about a war dog coming to a family, but what i got was really, really subpar. It’s like the director, Boaz Yakin, really didn’t care in this movie. The story was bleak, didn’t show anything about courage or bravery. Instead, about revenge. The acting was really subpar as well. Things i do give credit for is the small angle of intolerance dealing with a Texas Caucasian Conservative family, with Mexican Americans, and it does pack an emotion of losing a loved one due to war. However, the ending was so juvenile and dumb, that it really ruined what it suppose to bring!!!
Rating: 2.5 Stars)