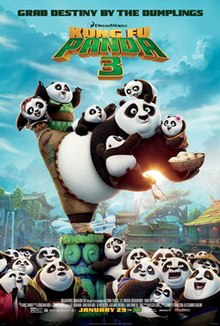 Kung Fu Panda 3 is just as fun as the first two movies with a lot more heart, but storywise, might be the weakest out of the trilogy!!!

I mean who doesn’t like a movie about a panda learning kung fu, and fighting villains? I do, and I’ve always had fun watching these movies for not only the fighting scenes, hilarity, and great animation, but for the message it gives about finding your true potential with yourself. Mastering yourself to become the best that you can be. i always thought that these movies really brings some thought provoking moments that can make both kids and adults think, enjoy, and relate. I mean what kind of movie about kung fu brings out these types of qualities? What I really like is that these sequels are not rushed, and they really take their time to create a good movie. That’s something I can appreciate. Having fun while watching is only icing on the cake, and I knew I was in for another good ride with the third movie. Especially with the way the second movie ended with his biological father realizing his son is still alive, I have to see what happens with Po next.

What I Like: The movie had its same charm as the first two movies. Not only with its kung fu action, but with old school design in certain scenes, and their brief history and culture of China that they like to give now and then. This movie was no different, and they twisted it in a different way. This time around they really up the ante in the magic department of kung fu, or the legend of it at least, and it wasn’t about brains or brawn. This time our lovable Po, voiced by Jack Black, needs to find his chi which can give him great magical powers. Added the twist that he now needs to be a teacher to his peers, and find out more about his family. It is a great moment when he finally meets his biological father, Li Shan voiced by Bryan Cranston (where I can hear his Walter White voice often, not that that is a bad thing) and Po goes out with his father to meet his own people where history is told that they know the great powers of chi. The moment Po meets his family did bring a lot of heart to this story, because what greater heart is family. In the past movies we learn more about how Po was adopted, and really created some good character for the Dragon Warrior. I always enjoyed some good kung fu fights, and in animation they always up the awesomeness. Seeing po with his ultimate chi form was fun to watch.

The So So: I really wished this movie gave more background from the past stories. It was five years since the second movie came out, and after watching this movie, I had to go back and remind myself on how things happened. I wish they gave some more background to remind me. However, it didn’t affect the movie that much. Meeting Po’s family was a great moment in the movie. What got me laughing yet a little offended was how lazy Po’s family is really is. To move they roll down a hill, eat a lot, and sleep till noon. I mean I know they are trying to be funny, but really now? It is what it is.

What I Didn’t Like: They introduced a villain named Kai, voiced by J. K. Simmons. He was a villain of magic where he uses the chi power that he steals against his opponents. First off, I really didn’t find this villain to be terrifying whatsoever. They had the perfect guy casted to be a menacing villain voice, but they really didn’t use it to their true potential. His background story is kind of weak and cliched as well. A guy who was on the good side and a great warrior, but was too selfish in trying to have the whole power of chi to himself. So he made it his quest to get everyone’s chi power. of course he almost succeeded, but good old Po stopped him. Also, the story goes that Po’s family forgot the powers of chi, and then when the cliched moment where Po almost get his chi stolen, and in slow motion for some reason, all the panda’s all of a sudden knows how to use it at that moment to save Po. These moments are just too typical and under explained.

Overall: If you are a fan of this franchise, you will like this movie. It is still fun and funny to watch. With that said, it is probably the weakest story out of the three movies so far. It does bring some good old family heart in this franchise for the whole family to enjoy!!!

(Sidenote: She’s Funny That Way- This comedy was pretty much a giant soap opera, and I don’t like soap operas. This time the scumbag is Owen Wilson’s character as Broadway director, Arnold Albertson. He has a family, but sometimes he goes out and finds an escort, and after they do the deed, he pays them a lot of money to get out the business and pursue their dreams. Of course, the latest one, Imogen Poots as Izzy Patterson goes to an audition that he is directing that stars Arnold’s wife, and then all the problems start. It did start interesting, but it just became a mess in the end. I guess that was scumbags get, more problems with prostitutes!!!
Rating: 2.5 Stars)