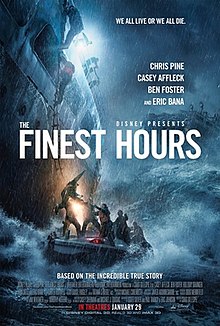 The Finest Hours is a good rescue movie, though a little cliched, it is enjoyable to watch some true grit with these Coast guard men!!!

Now I get a shot to talk about Chris Pine. I have to say is that I respect that he embraces a role and gives it his all. I first started to like him when he became Captain James T. Kirk in the Star Trek remake. I also really enjoyed him in the movie Unstoppable alongside Denzel Washington, and Jack Ryan: Shadow Recruit (My first movie reviewed on this blog). He has done dramas, horror, musicals, and even comedies. Though lately, his roles has been douchy, to say the least, especially when it comes to comedy. (Examples, Horrible Bosses 2 and Stretch.)  I enjoy, for the most part, his presence in the films. I know he is a man with a lot of heart. (Remember the tears coming down during last years Oscars during the performance of Glory by John Legend and Common.) I just hope he takes on a lot more dramatic roles. It is his niche where we see his true potential. With this movie, The Finest Hours, it just might be the right step to the right direction.

What I Liked: This movie took an angle that I personally never seen before, and that is the Coast Guard in the 50’s. Pretty much before they became the Coast Guard we know now. It was interesting to see how they worked, and the technology they used during that time. It was all interesting to me. Since the movie was based in Massachusetts’ Cape Cod area, you do hear the Boston accent. I have to say, being from Boston and all, they were pretty authentic. Chris Pine acted very well as a somewhat shy Coast Guard Boatswain Mate, Bernie Webber. His somewhat awkward presence of being too bashful, and saying some dumb, but funny things in any situation. He is also by the book type of guy when it comes to his job as well. As a person, he was calm and awkward, and I enjoyed his Boston accent. (Better than Matt Damon in The Departed, who is from Boston.) But once he goes out on a rescue mission to save an oil tanker that is broken in half with 33 people stranded, he showed his true grit in doing what is right to save these people during a blizzard storm. The other actor i enjoyed watching is Casey Affleck as Ray Sybert, the head of the ship’s engine room. During the crisis, people were going against him and questioning his methods, but he remains calm to do what is best in their situation and use it with teamwork, which helped tremendously. Both Webber and Sybert showed some true grit when all odds are against them. they used their talents to do what is right to rescue everybody. The action for this movie was pretty good, seeing the big waves, and a small boat going through it riskfully. The ship sinking scenes looked like a scene from the movie Titanic. Probably the most emotional part for me is during the rescue, they actually lost a guy. Even though the fact that only one person was killed is tremendous, that lost took a toll on everybody especially with the ship crew. He was a likable guy, and a big positive presence. I personally was sad to see him go out like that.

The So So: The movie was a little cliched. Given that it is a Disney movie, and it is expected to be typically cliched. Cliches like the people who go against their leader, and try to put things in their own hands. Usually they end up dying, but not in this case, it was more of a close call. Every problem that made this rescue even more daring. Not following orders to do what is right, even if it means death. The scene where they all turn their cars headlights on to find the rescue boat was cliched, but necessary. With all that said, it is a true story. The fact that almost everybody survived really made this a feel good movie, unlike Titanic, where it is a tragedy. Feel good movies, can be cheesy, but in this case, it was appropriate.

What I Didn’t Like: The subplot of Webber meeting Miriam Pentinen, played by Holliday Grainger, was really all about character development. I wished they could have done it a better way. It was perceived that she really was the domknator in the relationship over Webber. I mean she proposed to him. Maybe the movie should have focused more on Webber and the rescue, than their relationship.

Overall: It may have its cliched flaws, but it is a good, feel good, rescue movie. Showing that there are good and real people that will put their life on the line to rescue people. The fact that it is a true movie that happened in my home state is just icing on the cake for me!!!

(Sidenote: Brooklyn- This is an Oscar nominated movie where I don’t understand why it is nominated for Best Picture. All it is about is a girl named Eilis Lacey, played by Saoirse Ronan, who moves from Ireland to Brooklyn, NY and starts to enjoy it and meets a guy that she falls in love. A problem happens where she needs to go back to Ireland, and now is stuck in a dilemma of staying or going back. This movie just had my eyes rolling, because to me it was too cheesy and boring. There was nothing new to add to the cinematic world today, and yet it is nominated for Best Picture. This movie is overrated for my liking!!!
Rating: 2.5 Stars)

(Sidenote: Room- Now this Oscar nominated movie really showed something unique with a lot of emotion. It’s about a woman named Joy, played by greatly by Brie Larson, who is held captive in a room, which she called Room, and was there held captive for seven years.. Every night, her captor, Old Nick played by Sean Bridgers, comes in to give her necessities but rapes her every night. During her time there she had a son named Jack, played by Jacob Trembley, and the story takes off when he turned 5 years old. The movie showed a lot of good mother and daughter chemistry. What i really enjoyed was when her son manages to escape out of the Room for the first time. How he experienced life outside and what a shock to him, and still did his part to rescue his mom. Once they were rescued, the movie slowed up a bit, but the emotion in this movie really hits you hard. It may make you think about the small things in life that you can take for granted!!!
Rating: 4 Stars)