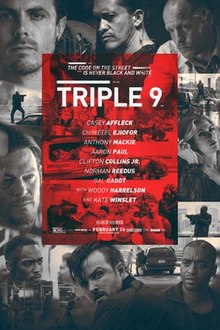 Triple 9 had some very intense scenes with a great cast, but the cast has been wasted with a contorted plot that really tries hard to be the next The Departed kind of movie!!!

Nothing better than a good old police crime thriller movie. Those are really my favorite kinds of movie because it blends in with some great action, suspense, and thrills to keep you engaged throughout the whole movie. Some of my favorites are some real time classics. Classics such as Bad Boys 1 and 2, Training Day, and my personal favorite, The Departed. I really can’t go wrong in watching these types of movies, and not be entertained at the very least. The good old good cop and bad cop scenario can really keep you guessing, and create some great twists. It’s my type of movies, and I will always watch them. Triple 9 had a great cast, and looked like it was going to be a good movie with some good action. I was kind of right.

What I Like: This movie was really about certain scenes that makes you go on your edge of the seat. Every time the cops try to find somebody, a sense of chilliness goes through you knowing something is about to go down. For the most part, the pay off was good. It also created some good heist scenes as well, and really shows how smart these crooks are, and how they execute well to do the job successfully. Really those scenes is what kept you engaged in this movie, and pretty much made it worthwhile to come and see it.

The So So: This movie had a great cast of great actors. It had Casey Affleck, Chiwetel Ejiofor, Anthony Mackie, Clifton Collins, Jr., Woody Harrelson, Aaron Paul (pretty much almost acting like Jesse Pinkman in Breaking Bad), and Kate Winslet as a Russian mob boss. That is just to name a few, it’s always hard to balance out the talent with that many actors. I mean they killed off Norman Reedus character early on in the movie which may piss off fans. Harrelson’s character was just a Sergeant Detective that smokes weed and warns people. The true characters in this movie was Affleck as the new cop that really tries to do good, and Mackie as the bad cop trying to screw the good cop over. Everybody else was just an extra with a big paycheck. It is what it is, but how else can you balance a good cast in a movie under 2 hours? It’s hard to do.

What I Didn’t Like: The story of this movie was too contorted, When they try to tell the story, it was always interrupted with a shoot out scene. It took me time to make sense of how this movie is progressing. Once it got going, I realized that they tried to make an Atlanta version of the movie The Departed with their undercover bad cops, and practically the whole cast getting shot from left to right. Only the story wasn’t expressed or developed well, and created too many distractions to have a satisfying understanding of this movie. Also, Director John Hillcoat really liked to create scenes that were too dark where you can barely see the characters faces. I hate it when movies to that. I want to see the movie, not be blinded of what is going on.

Overall: The movie may had its thrilling moments, but their great cast couldn’t save it from it’s contorted and occasionally confusing story. They wanted to make the next The Departed type of movie, but instead it was just a run of the mill type of movie with good actors. It is a little disappointing, but it is what it is!!! 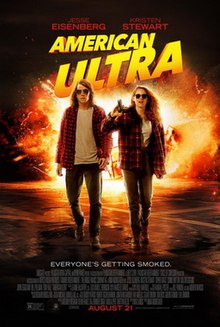 (Sidenote: American Ultra- Put this movie under one of the weirdest movie of the year. It may have a great acting chemistry with Jesse Eisenberg and Kristen Stewart, but the movie’s story really became over the top. Even the action scenes were just plain ridiculous. The story was just too weird and dumb, but for the stoners (which most likely it was made for) can actually enjoy while smoking their bong. As a comedy, it wasn’t that funny to me as well. That cartoony credits scenes really cemented it as just straight up weird movie, but may be entertaining for some of you all!!!
Rating: 2.5 Stars)