Zootopia (Sidenotes: Meadowland and Ricki and the Flash)

Zootopia is a very smart, entertainingly fun, and funny movie, which actually deals with a bigger picture about race and tolerance that was really thought provoking!!!

So once again, Disney is trying to make animated movies without the Pixar’s shadow. Recently they have been pretty good with Oscar winners in Best Animated Movie like Big Hero 6 and Frozen. Then Pixar took over once again. It’s a rivalry that they are doing with themselves. Now this year Disney is starting it off with Zootopia and Moana later, while Pixar is doing a sequel to Finding Dory. I have a feeling this year would be Disney Animations year. With that said Dreamworks Animation came out with Kung Fu Panda 3 and Trolls later on. Even then, it’s a safe bet this is the year for Disney Animation. Skeptic at first with Zootopia, but it is a pleasant surprise.

What I Like: This movie really is very smart. It may be an old run of the mill cop movie, but the movie brings more than that. They really took a theme about race and tolerance, and put it in a different way where kids and adults can think about. Since the city of Zootopia is made up of different animals, and it caters to all the different shapes and sizes of each animal. However, the attitudes towards one another can be different. Like the first Rabbit to join the Zootopia police force, and how even after graduating top class from the police academy, they still underestimate her skills. Or how Foxes are treated like scum of society. Most of all how Predators are treated as dangerous, and people are afraid of them in their daily lives which affected the animals way of living. Officer Judy Hopps, voiced by Ginnifer Goodwin, always had to overcome adversity in achieving her dream to become a cop which is not ideal for rabbits to do that job. Even when she finally achieves her dreams, she still is not taken seriously and gets stuck with parking duty. I liked how she has the never giving up attitude, which really pays dividends for her in the long run. She partners up with a Fox named Nick Wilde, voiced by Jason Bateman. An animal who always get disrespected for being who he is since his childhood. Cuz of that, he becomes a con artist to make money for himself. Since Judy has a record for Nick, he reluctantly teams up with her solve a mystery of a kidnapped animal. I liked how Bateman’s voice makes Nick, very cool, calm, and collected, and very intelligent as well which makes him get away with his con skills. The movie is beautifully animated, and it is so detailed down to the last whisker of the animal. It really made the city of Zootopia very authentic and unique. I like how the story turns from a regular cop movie, twisting to a big story about race and intolerance, and the twists in the stories of who really is the villain in the movie, and how they outsmart the villain, really made this movie enjoyable to watch. It was funny too, and how they really civilized these animals, and the witty puns were executed greatly. They didn’t have to get raunchy or inappropriate to entertain, and that takes great writing. The elephant in the room joke in the beginning of the movie, really showed how smart this movie is. Adding Shakira as a Gazelle pop artist, was a great touch with an entertaining song as well.

The So So: They may use the same old run of the mill cop story, but they really made it to something unique. I liked the message they bring by using their minimal cliches, and turning it into something thought provoking.

What I Didn’t Like: One reason I was a skeptic before watching this movie is because they showed a very funny scene in their trailer. The one where the DMV is run by Sloths, and how slow they are. When I saw it in the trailers, it was hilarious. But it ruined it for me in watching this movie. I knew that was going to happen when I saw it on the trailers, and my concern was that that was the best part in the movies, and ruin it when actually watching the movie. Luckily, they made up for it in the final scene where they were finding an illegal speed racer, and it ended up to be a sloth. That is hilarious.

Overall: This movie was pleasantly smart, entertaining, and funny for the whole family to enjoy. So take the family, and watch this movie. You won’t regret it!!!

(Sidenote: Meadowland- I had high hopes with this movie’s premise. A couple dealing with life after their child was kidnapped. I didn’t believe it would be that boring for me. It didn’t have any emotional impact on me whatsoever on a movie that is suppose to provide it. I lost concentration midway to the movie, and I really didn’t care for it, and that was disappointing. At least Olivia Wilde looks good in the movie.
Rating: 2 Stars) 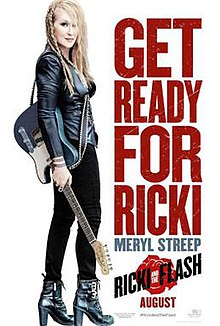 (Sidenote: Ricki and the Flash- It took me a little to get into this movie about a lady who abandons her family to become a struggling rock star. When her family is experience a traumatic problem, she gets called back to try to help. I’m surprised Meryl Streep would take a role like this, but as a great actress she is, she does her best. At least, the rock performances were entertaining to peak my interest, but the movie was really whatever for me.
Rating: 3 Stars)