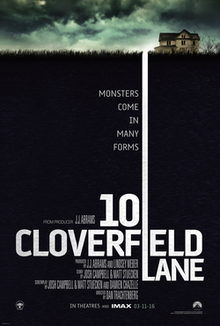 10 Cloverfield Lane is definitely an interesting and thrillingly creepy movie, but it took a turn for the weirdness and in the end, unsatisfying!!!

I personally really like the movie Cloverfield. I thought it was a fun and interesting monster movie. It really introduced me to the shaky camera method (which is now being way overused in film), and really put J. J. Abrams on my map as a film maker. I was working at a movie theater when this movie came out. First off, I remember seeing their trailer, and how it didn’t give the title of the movie which created an uproar with the audience. I thought it was pure genius in their marketing department. Lastly, I remember how people were throwing up in the theater because of their extreme camera shakiness. It got to a point where we have to put up warning signs, and try to clean up their messes at a minimum. Seeing this movie was very thrilling, and definitely one of a kind movie experience which I appreciated. I always heard of talks about a sequel, but it never came to fruition. Then all of a sudden, a trailer for the sequel came out of nowhere. By the trailer, I knew it would be something completely different than from the first movie, and it kind of made me skeptical. However, when the reviews came out, and how good it was doing critically, it brought up my intrigue again. It was somewhat enjoyable.

What I Like: You have to realize that this movie is very different from its predecessor. No shaky cameras, no similar characters, and a completely different story. Honestly, it was their different angle that kept the movie fresh. With that said, the movie still had it’s thrills as a horror movie. It also brought up their level of creepiness. In my opinion, one of the main reasons it was creepy is because you really do not know what the heck is going on. The story is about a girl named Michelle, played by Mary Elizabeth Winstead, who gets in a car accident. Next thing she knows, she wakes up chained up in a room in a bunker. She meets a guy named Harold, played by John Goodman, who claims that he rescued her, and that there has been a nuclear attack above ground. There is also another guy staying there named Emmet, played by John Gallagher, Jr., who was also rescued as well. Harold claims that they have to stay safely in the bunker for 1 to 2 years until the air clears out. Michelle was skeptical at first and tries to escape, but after seeing the effects of the people outside the bunker she relents, and starts to get use to life in the bunker which provided all the necessary things they all need for the time being. Eventually, more of the truth about Harold starts to come out which really made Emmet and Michelle try to escape no matter what it is happening outside. John Goodman as Harold really did a great job of being the creepy and paranoid host. No matter how much he tries to show how much of a good guy he really is, his actions and demeanor proves otherwise. His creepiness really took a turn to psychotic when he shoots Emmet, and tries to get Michelle as well for planning an escape. That chase scene was scary and thrilling, like a scene from The Shining. Director Dan Trachtenberg really knew how to make a movie creepy and thrilling, and that is something I appreciate.

The So So: The movie took a turn for the weirdness once Michelle escaped the bunker. That is when you see the correlation between the first movie, and this movie involving the alien monsters. She notices that there was an attack involving these monsters attacking the world, and it creates that final action scene of her fending off these monsters. The monsters were more weird looking than from the first movie which kind of threw me off a little bit. Also, that final action scene really wasn’t as thrilling as in the first movies. With that said, I knew a movie involving the Cloverfield name had to have these monsters one way or another. So in a way, seeing those monsters were satisfying. I just wish it was done in a more thrilling way, though before the action with the monsters it was still kind of creepy.

What I Didn’t Like: What made this movie from a good film to probably a semi decent film was really the way this movie ended. It still didn’t really answer the question about Harold and why he acts this way. The movie just worked under assumptions. My speculation is that this Harold guy just used the situation to bring in a woman for company while his is in the bunker. Still doesn’t explain why he let Emmet in if that is true. I believe the girl Megan he is always talking about was a girl that was with him before, but managed to kill her when she tried to escape (I’m almost positive that theory is true). Still, the lack of explanation really threw me off. In the end, Michelle manages to beat the monster by herself, and as she is driving off realizes from the radio that there are surviving humans, and that they are winning the war against these monsters. Then it just ended on that note, which is a horrible way to end a movie with a possibility of another sequel in that regard. I don’t like it when movies do that, especially with so many unanswered questions. It really made from a good thrilling and creepy movie, to almost a run of the mill horror movie which I grew to detest nowadays. It’s a shame really, cuz I was really getting into the movie until the last scene when Michelle did get out.

Overall: The movie is a good watch until the escape which left me really unsatisfied with the whole experience watching this movie. I expected more, and pretty much got less, but if they do go ahead with another sequel, I hope it explains more of what Michelle had to go through, and maybe a war between humans and those alien monsters!!! 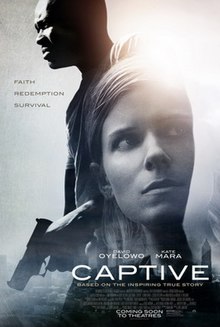 (Sidenote: Captive- I had a lot of high hopes for this movie. Especially when the story involving one of my favorite inspirational books, “Purpose Driven Life.” I thought this movie will be thrilling and inspirational. Unfortunately, I had neither of these effects on me while watching these movies. It was actually a little boring, and disappointing. It’s a shame really, cuz it was an opportunity to really be a good inspiring. Instead, it was a waste, but at least it shows you can overcome drugs and start a new life!!!
Rating: 2.5 Stars) 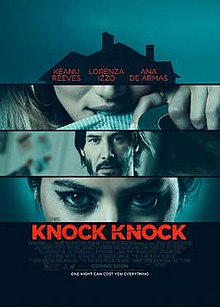 (Sidenote: Knock Knock- Keanu Reeves and his semi good acting. I enjoyed seeing the two good looking girls playing with him, and eventually committing to infidelity with the repercussions that follow. Director Eli Roth, who is known for bloody horror movies, really brought out the psychotic mind set without bloody violence, which I can appreciate. However, the ending really left me unsatisfied, and it really turned into a tragedy. It may show how infidelity can break you, but this movie took it to a big and unrealistic extreme!!!
Rating: 3 Stars)