The Brothers Grimsby (Sidenotes: Paranormal Activity: The Ghost Dimension and Alvin and the Chipmunks: The Road Chip)

The Brothers Grimsby has a weak storyline, but let’s be real, you watch this movie to be grossed out amused by Sacha Baron Cohen and his crossing the boundaries comedy, with some scenes that will leave you with your mouth open saying, “What the heck did I just watch!!!”

Sacha Baron Cohen is at it again with his antics and craziness. This guy takes comedy to a whole new level, and not only the he cross the line, but he he runs miles after that. Each comedic movie he stars in, there is always something for me to be grossly amused. A point where I’m repulsed, but yet laughing at the same time. Having me shake my head in disbelief on what i just saw. He did that in Borat, where I first got to know him as an actor, and how funny and smart that movie was. That scene where he was fighting and wrestling with another guy, while they are both naked, had me shocked and laughing. In Bruno, he raised up the stakes, though not as good as Borat, there were many scenes that once again had me grossly amused. He took a step back with The Dictator, but there were still a lot of funny moments. Not only the movies where his antics keep you talking, but the way he promotes his movies in character. The antics he surprises on innocent celebrities in award shows or late night shows are always a spectacle to see. With all that said, Cohen is a very good actor. He has played some serious roles very well. He showed his singing talent in Sweeney Todd: The Demon Barber of Fleet Street and Les Miserables. Also he did acting and voice work in Hugo and Madagascar. He’s an all around talent, but his comedy is what makes him very famous and troublesome in the film world. So in The Brothers Grimsby, I really wanted to see what he will do to shock me again, and he didn’t disappoint.

What I Like: The movie definitely had his comedic moments. Where Sacha Baron Cohen plays an English soccer hooligan named Nobby Butcher who lives in Grimsby with his big family. All his life he has been searching for his long lost brother.While his brother, Sebastian Graves played by Mark Strong (who finally plays a good guy instead of the villain), is a secret MI6 Agent. As the story goes, they meet up and eventually team up to help his brother stop a massive terrorist attack. Before I start getting into specifics in the comedy, let me start saying that I really enjoyed the first person view action in this movie. Especially, at the beginning of the movie. It was a lot of fun to watch seeing guys getting beat up in first person mode. Gives an interesting angle on movie watching that is exciting. As for the comedy, there were some very funny moments, but the shocking moment definitely did not disappoint in the shock factor. That was the elephant scene. It is very rare to watch a scene in the movie where my mouth was wide open in shock, and I had my hands covering my mouth. While this is going on, I was saying,”Oh my gosh,” and “What the hell.” In the end, I was shaking my head not believing what I just saw. It was bad enough they were hiding in an elephant’s vagina, but to have another elephant come and mate with that elephant showing all the graphic details, and ending it with the major ejaculation. Cohen, never ceased to amaze me. I also give the movie bonus points for that hilarious scene of seeing Daniel Radcliffe and (with great pleasure watching) Donald Trump getting affected with AIDS.

What I Didn’t Like: Even though you don’t watch these types of movies for the story, but for the comedy. The story was very weak. It tried to add emotion, but it wasn’t really there. They try to put some great action as a spy movie, but it was very rom com. If you watch the movie for the story, you will be greatly disappointed. (Watch it as a comedy, and you may be satisfied.) Last thing is that one joke I really did not find funny, but disgusted, is their jokes about pedophilia. They even show a guy in a relationship with a young girl. That made me like, ok, that is too far. Pedophilia is not a laughing matter to me, and that’s where I draw the line in comedy (if there is such a line.) I mean they just used it as a cheap joke, which really wasn’t worth it.

Overall: You know what to expect when you see a movie starring Sacha Baron Cohen, and you won’t be disappointed. The comedic shock value will go beyond the boundaries once again. It shocked me big time, which is a rare reaction for me. So take my word for it, if you want to be shockingly and grossly amused, watch this movie!!!

(Sidenote: Paranormal Activity: The Ghost Dimension- I’m glad they finally ending this series that just got worse and worse as each movie comes out. I really enjoyed the first movie, and their type of horror, but now, their horror just got old real quick. For this movie, I had to say, enough. They decided not to go with the paranormal activity stuff and go straight to the demon possession and seeing the entity of the demon itself haunting the family. Honestly, it made it worse. They also tried to tie up all the stories of the past movies, but wasn’t explained well. In the end the demon wins, and I’m like whatever. This movie was just a waste of time, even for the people who really enjoy horror movies!!!
Rating: 2 Stars) 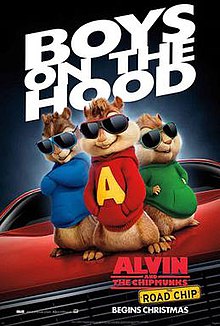 (Sidenote: Alvin and the Chipmunks: The Road Chip- This was a slightly better movie than it’s recent predecessors. However, it is not saying much. You pretty much get the same thing with these movies where The Chipmunks get into big trouble, get reprimanded, and still become rock stars. They did add some emotional feeling to it this time, but it is whatever. This movie may be good for kids under 10, but that’s it. It could be tortuous for the adults taking these kids to watch it!!!
Rating: 2.5 Stars)