Batman v Superman: Dawn of Justice (Sidenotes: The Visit, Legend, Daddy’s Home, and A Walk in the Woods) 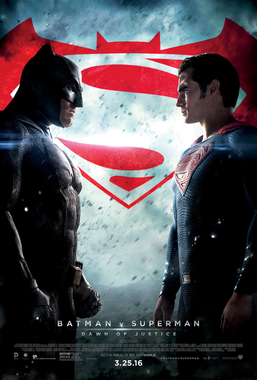 Batman v Superman: Dawn of Justice had a terribly structured story where it seems they were doing too much, but once it got settled, the movie’s action really made this movie enjoyably watchable at the very least!!!

So the day came where DC Comics and Warner Brothers studios decided to start their cinematic universe to form The Justice League. Before that epic comes out, they decided to start it off with The World’s Finest storyline, and make Batman and Superman come together for the first time on screen, and have them go against each other. With that said, so much controversy among the nerds and fanboys really gave this film a frenzy before it went into pre production. Starting with how they are desperate to catch up with Marvel Cinematic Universe, and their way of doing is structurally dumb with the heroes all together first and developing character later. The casting of Ben Affleck as Batman really created a big controversy saying that he was the worst miscast for Batman ever. Even Gal Gadot and Jesse Eisenberg as Wonder Woman and Lex Luthor showed had caused some flack with not only miscasts, but that this movie are putting too much into one film because they are desperate. On the real, when hearing all this controversy, I always had to address my fellow nerds and fanboys to calm down, and give this movie a chance. Sometimes with the casting, they will always complain for stupid reasons, but end up loving them after the movie. One great example is when they casted the tall Hugh Jackman as Wolverine, they say he was too tall for the role for a character that is short. My personal favorite is the Heath Ledger casting as The Joker in The Dark Knight which fans had a big uproar, including myself, but ended being one of the greatest Jokers on screen. Though some of the flack may have some validity, but you should always give the movie a chance, and then judge. That is my philosophy for all films that are announced. The hate first approach really makes us look more judgmental than conservative Republicans, and i rather relax and enjoy the film for what it is. If it’s bad, well, it is what it is. For a movie this big, and with so much things riding for this film, I had really hope that this movie does well, financially speaking. I personally though Man of Steel was really good, and an incantation of Superman that makes him relatable emotionally. My hopes is that this movie will cover the complaints from Man of Steel and make an even bigger story. Only time will tell, but as the film came, some of the flack do have some substance.

What I Like: Pretty much the only thing that made this movie enjoyably watchable is the action and the special effects. One thing that director Zack Snyder does well is make a lot of great fighting and action. The fight between Batman and Superman really pays homage to a very famous comic story called The Dark Knight Returns by Frank Miller. It shows the brute strength of Superman, played by Henry Cavill, and the grit and intellect of Batman, played by Ben Affleck. It shows how a man with no powers can hang with a guy with super powers. The final action scene where Superman, Batman, and Wonder Woman, played by Gal Gadot, all fighting together against Doomsday, played by Robin Atkins Downes. Shows the potential of a Justice League movie of seeing these heroes working together to defeat a powerful enemy. Seeing Wonder Woman for the first time in film is a breathe of fresh air in comic books movies. Seeing her in action was fun to watch and shows how powerful and smart she really is. Probably my favorite scene is seeing Batman beating up guys trying to save Martha Kent, played by Diane Lane. That fight scene alone was probably the greatest fight scene involving the character Batman on film. Ben Affleck as Batman really shut the Batfleck haters up, because he really held his own as the iconic hero. I wish he would direct the films and become more involved (it could strongly happen). I loved seeing the cool Batcave with his butler Alfred, played by Jeremy Irons, calling the shots from there and being cool, calm, and collected and still being a mentor to Bruce Wayne. I liked how at the beginning they developed the story where during the final fight with Superman and General Zod in Man of Steel and showing the point of view of Bruce Wayne during that time and why he doubts Superman’s abilities was probably the best thing this movie developed.

The So So: The politics involving Superman really gave this movie potential. It is a great angle of people doubting if Superman is a legit hero. Seeing Clark Kent and Bruce Wayne taking the political approach against the other in their own way. It is the perfect story to follow Man of Steel, however, it was executed poorly. You get confused on the point of views and they really don’t give too much reasons why except for the main characters way of thinking. It was all rushed and consulted as well, and really didn’t give their main point until the last part of the movie.For a political approach, you really need to develop the story well, and they really didn’t and that’s unfortunate. One casting that gave me a question mark in my mind is Jesse Eisenberg as the main villain, Lex Luther. Eisenberg is known for his roles as a humbled guy who knows how to talk with a lot of ephasis and assertiveness. To me Lex Luthor is a cool, calm, and smart villain that uses his brain to go against Superman. With Eisenberg, you get the geeky tycoon who really didn’t have a legit reason to go against the superheroes. He is very quirky with people, but he shows his assertiveness to other people to get what he wants. Geeky tycoons are really smart, and he was smart to give him depth to his character. When he got bald, he showed his psychoticness which can be over the top, but gives potential to his character. He did give a lot of good lines in the movie. Most notably the devils coming from the sky quote, and the grandmother’s peach tea really gave some ironic humor. The one action scene that involves Batman in his Batmobile was really cool to watch the action. The thing that bothered me with this scene is that Batman looked like he killed people which he definitely does not do. Maybe I’m overthinking it, but it didn’t make me fully enjoy that scene for that reason. With that said, it created the greatest line in the movie by Batman, “Tell me, do you bleed? You Will.”

What I Didn’t Like: The beginning of the movie was really structured terribly. It was rushed and consulted, and made it confusing for me. I understand why they need to put the origin story of Batman, and it was a cool scene, but unnecessary. The dream sequences was just stupid for me. Seeing a kid Bruce Wayne being floated by bats was just plain weird for me. The sequences do make it confusing, but once you know it is a dream you just ask yourself what weird thing will happen this time. Nothing to do with the story, and not necessary. Maybe I’m being nitpicky, but some things bothered me. Like why is Gotham City and Metropolis was next to each other, these cities should be far apart. Why the heroes know their identities? Adding Doomsday to the mix was really unnecessary as well, and it showed that they were really trying to put too much into one movie. It was like three movies in one, and it horribly showed. Doomsday is a great and epic villain, and he was watered down. Doomsday did do what he had to do in killing Superman, but not the epic way like in the comics. Why can Superman fly with the Kryptonite spear is beyond me. Also, wouldn’t it be better for Superman to throw the spear at Doomsday once Batman hit him with the Kryptonite gas gun. Probably would of saved him from dying. Then that eye rolling romance with Lois Lane, played by Amy Adams, would keep going. They rushed in explaining what happen to Clark Kent after the final fight scene. They showed a headline but the scene was too quick to read it. People are oblivious to know that Superman with glasses is Clark Kent, which is still stupid in my book.

Overall: The movie started off horrifically, but once it all settled, the action really makes it enjoyably watchable. The nerds and fanboys will like it, but the regular movie buffs will hate the structure of this movie. I give this movie a strong benefit of the doubt for now. I hope they can redeem themselves better with their next movies in their own cinematic universe. Suicide Squad looks promising in their unique way which gives me hope, and the Wonder Woman movie gives something new. I just hope they really bring it with the Justice League movie with some better writing. Seeing the cameos give some fun potential (disappointed with no Green Lantern), and for the sake of DC comics I hope they can learn from their mistakes from this movie!!! 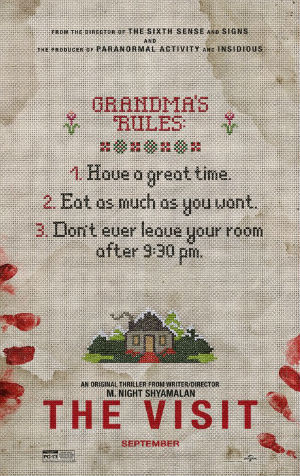 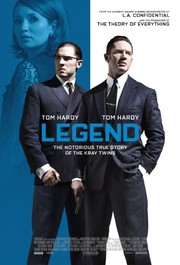 (Sidenote: Legend- This movie started off a little slow for means getting used to the strong British accents about the Kray twins gangsters, both played by the hardest working actor in 2015, Tom Hardy. Once the movie really got together, it was a really cool and clever gangster flick. I thought director Brian Helgeland directed beautifully. The one scene where Tom Hardy fights his other character as himself is some great choreography and editing to make it look legit. The movie is tastefully violent as well. Almost everything you need in a gangster movie, almost!!!
Rating: 3 Stars) 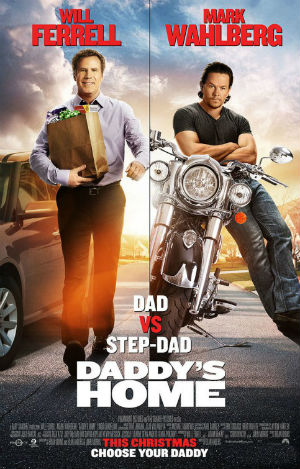 (Sidenote: Daddy’s Home- Will Ferrell and the great Mark Wahlberg team up again for another comedy. They showed their comedic chemistry, but the story was just to same old, same old thing. They really trying to make a family film with a father and a step father trying to be the favorite father with their family, but it lacked charm. It has some funny moments, but there were a lot of misses with their jokes. They had some funny cameos though!!!
Rating: 2.5 Stars) 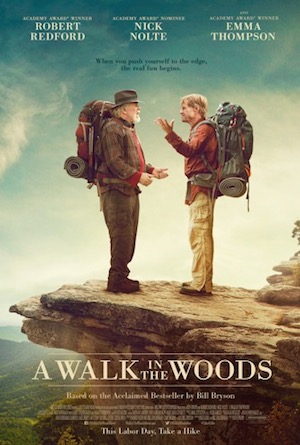 (Sidenote: A Walk in the Woods- This stars Robert Redford and the raspy voice of Nick Nolte as two old guys trying to hike the Appalacian Trail. The two actors had a lot of chemistry together. Sharing funny stories and becoming vulnerable with each other. It had a lot of charm and wit as well. However, that was it in the movie, if you’re into mountain scenery and the outdoors, you may enjoy it, but this movie lacked depth, and I was greatly disappointed that these guys didn’t finish their goal. So no real inspiration if you ask me!!!
Rating: 3 Stars)