Barbershop: The Next Cut (Sidenotes: Underdogs and Macbeth) 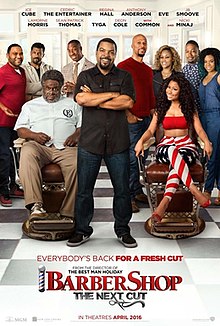 Barbershop: The Next Cut brought back the charm of the first movie; the story and subplots may seem rushed, but the strong political message is there to raise awareness!!!

I was in high school when the first Barbershop movie came out. I really enjoyed the touch of realness on top of the fun and charm. This movie has that same camaraderie I feel every time I go to the barbershop. You talk and banter about many different things and see how vulnerable some barbers really are in life. The first movie captured that. With the second movie it got a little stereotypical with its comedy, but it was still watchable. As far as their spin off movie in Beauty Shop goes? People seem to forget about that one. With that said, I didn’t have high expectations with the third movie. I believed that it wouldn’t be even close to being as good as the original. I thought the idea was going to fade out permanently with this next installment. However, I forgot one thing – that a sequel that takes their time to make a good movie can hold its own.

The movie returned to its charm and wittiness from the first movie. The comedy is fresh and it relied on feeling and emotion. It deals with issues that are happening today so it felt more relevant. At the beginning, I was laughing out loud. This movie cut out some characters from the old movie, but by combining a beauty shop with the barbershop, they brought in some new characters that added an extra dynamic. You still have the main character of Calvin Palmer, played by Ice Cube, who is the glue keeping this movie entertaining and dramatic. You still have Eddie, played by Cedric the Entertainer, who brings most of the comic relief with his old school style (though you still don’t see him cut hair). You now have Angie, played by Regina Hall, who is the co-owner of the barbershop and beauty shop and she brings in a woman’s touch to this movie that you don’t see in the past movies (unless you count Beauty Shop). The main story of this movie is the awareness of the high violent crime rates in the South Side of Chicago due primarily to gang violence. Instead of seeing the same story of the barbershop on the brink of going out of business, you see the barbershop try to do something to help with the community to stop the senseless violence. They declared a ceasefire for 48 hours and gave free haircuts during that time. During that time, you hear the banter about different opinions of the violence in the city and how they can stop it. It took a break from the comedy and really dives into the issue and how it affects families. It is a movie that brought political awareness for the people who come out and watch it. The most powerful scene was Calvin stepping up as a father to his son, Jalen, played by Michael Rainey Jr., and doing what a father does best by stopping him from joining a gang.

Some of the subplots seem to be rushed to a conclusion. They present the problem and then quickly wrap up the problem just as the movie is about to end. I give it credit for tying up loose ends and focusing on the main issue, but I felt some of these subplots had some serious problems. They resolved it by simply kissing and making up instead of earning its resolution.

Some of the comedy didn’t work for me. Draya, played by Nicki Minaj, twerks her assets to promote the ceasefire. It was weird and counterproductive to other social issues way to raise awareness and stop senseless violence this way. It was also unbelievable that you can easily stop two gangs from killing each other by simply talking to them and promoting a ceasefire. Anthony Davis makes a cameo in this movie and his acting was horrific. I don’t know what it is about NBA players and their lack of acting. It is getting ridiculous.

This movie is a good watch, and you get a bit of everything. You get comedy, drama, and a political awareness that’s emotionally satisfying. It is a nice addition to this trilogy that knows their audience and doesn’t sacrifice fun for reality or vice versa.

(Sidenote: Underdogs- I couldn’t find the English version of this movie, so I had to see it in its original format in Spanish called Metegol. Luckily, I know the language and this movie is from Argentina, my other half of my ancestry. This animated movie shows Argentina’s soccer culture. The movie’s story may seem a little weird about foosball players coming to life and helping the main character. However, its message worked well enough on an emotional level; respecting the simplest things that you do. Though the ending was dramatically underwhelming, it is still a fun watch!!!
Rating: 3.5 Stars)

(Sidenote: Macbeth- I love Shakespeare and was looking forward to watching this movie. It liked the cast including Michael Fassbender as Macbeth and Marion Cotillard as Lady Macbeth. It is truly tragic that this movie was so boring. It focused purely on the dramatic lines and there was little to no action. I expect more from a Shakespeare adaption. I wanted to see a movie, not just a play captured on a camera. I was disappointed and underwhelmed with this movie!!!
Rating: 2 Stars)