Criminal (Sidenotes: Point Break, Jem and the Holigrams, and By the Sea)

Criminal may have an interesting sci-fy premise, but it tries too hard to be a thriller that it is almost comically bad!!!

Not much to say about this movie beforehand. All I can say is that a cast with Kevin Costner, Gary Oldman, and Tommy Lee Jones, you have to give it a watch. A sci-fy movie with these three actors is weird enough for me to watch.

What I Like: I think the premise of this movie is intriguing. They start by having a sci-fy type of story about transcending someone’s mind to another person. They mix it to a spy thriller of having a former prisoner, Jericho Stewart played by Kevin Costner, get the memories from the dead CIA agent, Chris Pope played by Ryan Reynolds (who always seem to have roles about changing of your minds to different bodies), with all the infos of stoping a big terroristic that started by a hacker nicknamed The Dutchman, played by Michael Pitt. It has the moments of a good spy thriller with the sci-fy angle, and director Ariel Vroman tries his best to show that story.

The So So: For the big three actors of Kevin Costner, Gary Oldman, and Tommy Lee Jones were not used effectively. Kevin Costner played the main guy who is a former psychopathic criminal who gets the memories that slowly starts transitioning to him being good. It’s funny to see how he starts being a bully to all the people that get in his way, but then all of a sudden he starts becoming good to a point he is safe with children. It’s fun to see, but very rushed was his character development. Gary Oldman played a CIA director named Quaker Wells who decided to go with the human experiment of transcending the minds to finish the mission. I like how it shows how desperate it is for the experiment to work. However, this is the first movie with Gary Oldman where I started to hate his character. His heart ma be in the right place, but the way he acts like a jerk made him very egotistical with no form of ethics. He made a lot of bad decisions that created more problems than solving it. I believe he was too stereotypical in his role as a CIA director. As for Tommy Lee Jones, he played the doctor, Dr. Franks, that conducted the experiment. While Director Wells was rushing it all, he actually had a sense of ethics to do whats right for Jericho in this experiment. He was the voice of reason that nobody listens to, not even his own patient of the experiment. His character was very underused, and was pretty much gone after the middle of the movie which is a shame, cuz I really thought he would make a breakthrough to Jericho, but that went to another role in Agent Pope’s wife, Jill played by Gal Gadot. I also have a theory if they switched the character roles of Tommy Lee Jones and Gary Oldman, it would have been a better casting.

What I Didn’t Like: The movie really tries hard to be a spy thriller with a lot of action. However, all these big time action and explosions really didn’t make any sense. Some of the fight scenes involving Kevin Costner was just straight up comical. I was actually laughing at the scenes where it really is not funny. It was just that ridiculous. Even Michael Bay’s action made more sense than this movie, and he does make it funny for us to laugh. The movie was suppose to be serious, but it was funny. The dialogue was just the last straw that made it comical in a bad way. Also the big twist at the end where you thought the villain, Xavier Heimball plays by Jordi Molla, won, but the set up the missile to target himself and ends up dying. I saw that twist coming from a mile away. The movie got too cliched to know what is going to happen. In the end, I was just shaking my head in disbelief how funny it was for a serious movie.

Overall: This movie was too subpar for the big names in their cast. It didn’t quite fit the roles, and maybe it would’ve been better with less famous actors. For a sci-fy thriller, it was just stupidly funny. It could be a good thing for some people, but for me it wasn’t right whatsoever!!!

(Sidenote: Point Break- I really didn’t like the original movie with Keanu Reeves and Patrick Swayze. I didn’t have high expectation for this remake. What I give it credit for was the action in their stunts. They really took it to the next level, and it was fun to watch. What didn’t work was the bland story which was rose than the original story. If it was a Nitro Circus type of movie, it would work. Anything else it was ok at best!!!
Rating: 3 Stars) 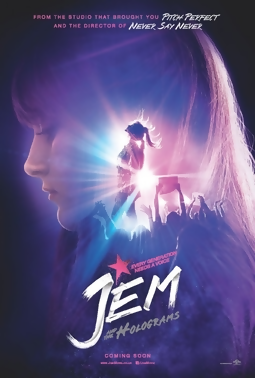 (Sidenote: Jem and the Holograms- I vaguely remember watching the cartoon in the 80’s as a young kid. This movie does stick the roots of the famous cartoons. It is catered to kids of today, but it didn’t have that corniest that kids movie usually has. Instead, I thought it had some good thought provoking emotions that can inspire the kids watching it. The story is a typical regular to rock star type of cliche where it was rushed. However, you won’t be mad watching it with your kids, you can be intrigued. Maybe!!!
Rating 3.5 Stars)

(Sidenote: By the Sea- You would think a movie that stars a true husband and wife and is directed by one of them, and see some genuine chemistry between them. Not the case in this movie, I thought that Brad Pitt and director Angelina Jolie Pitt were so awkward working together. Jolie Pitt really tried too hard in adding the art into this movie, however I thought it was too boring, it didn’t give depth about reconciling a marriage, and honestly, it was just plain weird. It really didn’t make a lot of sense to me, and I was turned off before it hit its climax. You ask yourself, I should I care about this couple!!!
Rating: 2 Stars)