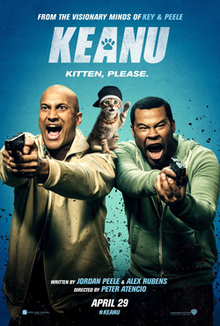 Keanu had its hilarious moments even though the story was dumb, but I was enjoying it!!!

I’m a fan of the comedy duo Keegan-Michael Key and Jordan Peele (Key and Peele). I think they had the most hilarious sketch comedy show on TV since the Dave Chappelle Show (Sorry Saturday Night Live). These guys are hilarious and their comedy is unique and groundbreaking. Some of my favorite sketches are President Obama’s Translator and the Substitute Teacher to name a few. Now they are bringing their talent to the big screen and you should be excited about it. You know you will get some hilarious comedy and one liners and this movie practically did its job.

What I Like: The movie had its hilarious moments; moments that were comically unique. As expected, you get great chemistry between Keegan-Michael Key and Jordan Peele as Clarence and Rell. Just typical guys who live in the suburbs and once Rell’s cat, Keanu, was catnapped, they were off on an adventure. I enjoyed seeing them trying to become gangsters to get Keanu back from a drug supplier named Cheddar, played by Method Man. Some of their one liners were hilarious. One line that had me laughing was, “You sound like Richard Pryor’s impression of white people.” The strip club’s name of HPV had me laughing and grossed out at the same time. There barely was any slapstick comedy which I really appreciate. It shows they took their time in writing a good comedic movie that practically worked. I enjoyed for the most part how Clarence and Rell BS their way as big times gangsters and actually inspiring some low life thugs into better men. Hearing these thugs jamming out to George Michael had to be one of the funniest scenes I have ever scene, cuz it is so dumb, it’s funny. When Clarence smoked the drug by accident and he is in the George Michael video and then he sees Keanu with the actual Keanu Reeves’ voice was hilariously perfect. Will Forte played a small time drug dealer named Hulka was also funny in this film. I’ve never seen Will Forte act as a thug and that was just too funny to see. He actually nailed that role. I also enjoyed seeing the Allentown Boys, also played by Key and Peele, and how they brought an intimidating factor to this movie. They actually created some thrilling scenes in a comedy. Last, the cat, Keanu really stole the show. The cat was so cute that it would singlehandedly make YouTube jealous. Seeing this kitten in a do-rag really made me laugh. I also enjoyed seeing him in the calendars of famous movie scenes. That was just perfect.

The So So: Some of the scenes may be corny or clichéd but Key and Peele made it work with their comedic charm. The Anna Faris cameo was too weird at first, but when the scene escalated it was a little entertaining. However, in the end, when it ends up it was all a police set up, that really didn’t make any sense to me. The action scenes with shooting, car chases, and back flips were forced, but the comedy actually made it fun and watchable. I did shake my head because of the corniness, but I was laughing. Whatever seems dumb at first, they make up for it and made this enjoyably funny. Also the clichés of these guys starting weak and then growing strong through their adventure can be a little eye roll worthy, but you can forget about it with another joke they make. Pretty much this is a good stoner movie (I’m not a stoner for the record) which will make it a cult classic.

What I Didn’t Like: The story was pretty dumb even though Key and Peele made it work. Really it is all about everybody wanting the cat. It wasn’t about the drugs, money, or gangsters. Everybody was fighting for the cat. With Rell it made sense because it shows him adopting and caring for the cat. However, they never explain why Cheddar, the Allentown Boys, and even another drug dealer named Bacon all want this cat so badly. Why is this innocent cat so valuable that it is worth dying over? Pretty much all the craziness that happened in this movie was all for a cute kitten which is pretty lame and kind of affected me in watching it.

Overall: If you’re fans of Key and Peele, you will not be disappointed by this movie. Yes the story may be dumb, but the comedy makes up for it. You will be laughing and enjoying this movie throughout. You won’t be bored. I can assure you of that!!!