Warcraft had some cool graphics with some epic battles, but the story was one clichéd mess that reminded me a lot of The Lord of the Rings. Maybe this movie was way overdue that it wore out its welcome!!!

I never really played the video game Warcraft. I knew people that were obsessed with it, but it never got my attention. I respect the fans and their dedication to this game, and there is a large fanbase. When I saw the trailer for this movie, I wasn’t sold. Maybe because it reminded me of The Lord of the Rings. After watching this movie, my intuition was right.

What I Like: One thing I give credit for director Duncan Jones doing his best to make this an epic. The CGI was spectacular with the many details with the Orcs and other beasts. What I really enjoyed is the battle scenes that actually made this movie watchable. The battles between humans and orcs were very creative and epic. One scene that I really enjoyed is the beginning where we get a first person view of an orc about to fight with a human, and once he goes for the final kill, the camera turns to the orc smashing his sledgehammer on the human.

The So So: It does mix epic war scenes with magic and wizards. However, I was confused whether these wizards were really powerful, or very limited. It didn’t really show the potential. Although there was a cool uncredited cameo of Glenn Close as Alodi giving the wizard Khadgar played by Ben Schnetzer, some words of wisdom. Probably the worst part of the action was seeing the wizard’s magic on display. One character that weirdly got my attention was Garona. A half orc half human breed. She was played by the beautiful Paula Patton (though beautiful but with a huge underbite with tusks and horns). She was a main character in this film, but I never understood why she was so important to both the Orcs and humans. I didn’t mind watching Patton in action in a weird fantasy sort of way. (Don’t judge me!!!)

What I Didn’t Like: I’m willing to bet if this film came before The Lord of the Rings and The Hobbit movies, it would’ve seen some great traction from movie goers and fans alike. Instead, it came out after these movies, and let’s face it, it is just like The Lord of the Rings. All the clichés of different species fighting each other with Wizards, acts of betrayal, sons getting killed and epic murders. Maybe if it got a R rating for violence it would’ve been something different to watch. The story was really weak, and their lack of character development left me confused on the intentions of these characters and why they chose to approach this problem in a way they did. There was so much betrayal that I thought this movie will betray me and say it is a sequel to Lord of the Rings. It was just a big mess story wise, and poor excuse to see cool action scenes.

Overall: I’m not sure of the fans of the game will like this movie. However, if you’re an action junkie, you will like this movie at the very least. For me, the story and character development was too messy with too many clichés that really didn’t do it for me in the end. At least you see some epic battle scenes that make it worth a glimpse of your time!!! 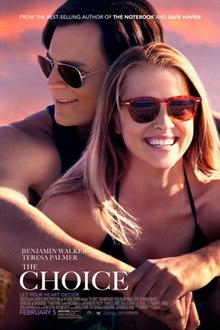 (Sidenote: The Choice- You want to talk more about clichés? Watch this movie that is a typical run of the mill chick flick. I’m sorry but the good old romance with love triangle just didn’t do it for me. Throughout the movie I had my eyes rolling over the cheesiness. Almost made me not want to fall in love (almost). I know there can be better made chick flicks or romance movies, but this one is not one of them!!!
Rating: 2 Stars)